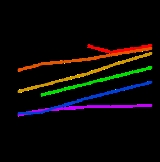 Encyclopedia
Human development in the scope of humanity
Human condition
The human condition encompasses the experiences of being human in a social, cultural, and personal context. It can be described as the irreducible part of humanity that is inherent and not connected to gender, race, class, etc. — a search for purpose, sense of curiosity, the inevitability of...
, specifically international development
International development
International development or global development is a concept that lacks a universally accepted definition, but it is most used in a holistic and multi-disciplinary context of human development — the development of greater quality of life for humans...
, is an international and economic development paradigm that is about much more than the rise or fall of national incomes. People are the real wealth of nations. Development is thus about expanding the choices people have, to lead lives that they value and improving the human condition so that people will get the chance to lead full lives. And it is thus about much more than economic growth, which is only a means —if a very important one —of enlarging people’s choices.

Fundamental to enlarging these choices is building human capabilities
Capability approach
The capability approach was initially conceived in the 1980s as an approach to welfare economics....
—the range of things that people can do or be in life. Human development disperses the concentration of the distribution of goods and services that underprivileged people need and center its ideas on human decisions.By investing in people, we enable growth and empower people thus developing human capabilities. The most basic capabilities for human development are to lead long and healthy lives, to be knowledgeable, to have access to the resources and social services, needed for a decent standard of living and to be able to participate in the life of the community. Without these, many choices are simply not available, and many opportunities in life remain inaccessible.

There are four basic pillars of human development: equity, sustainability, production and empowerment. Equity is the idea of fairness for every person; we each have the right to an education and health care. Secondly, sustainability is the view that we all have the right to earn a living that can sustain us and have access to a more even distribution of goods amongst populations. In addition, production is used to show how the government needs more efficient social programs for its people. Lastly, empowerment is an effect of general well-being.

This way of looking at development, often forgotten in the immediate concern with accumulating commodities and financial wealth, is not new. Philosophers, economists and political leaders have long emphasized human well-being as the purpose, the end, of development. As Aristotle said in ancient Greece, “Wealth is evidently not the good we are seeking, for it is merely useful for the sake of something else.”

Developed countries are seen as those who have a continuous progress in the indexes of life. The countries that have seemed to excel are viewed as having better policies than those who have remained stagnant.

In seeking that something else, human development shares a common vision with human rights
Human rights
Human rights are "commonly understood as inalienable fundamental rights to which a person is inherently entitled simply because she or he is a human being." Human rights are thus conceived as universal and egalitarian . These rights may exist as natural rights or as legal rights, in both national...
. The goal is human freedom. Therefore, human development is interconnected with human rights and human freedom because in well-managed prisons life expectancy and literacy as measured by the Human Development Index could be quite high. And in pursuing capabilities and realizing rights, this freedom is vital. People must be free to exercise their choices and to participate in decision-making that affects their lives. Human development and human rights are mutually reinforcing, helping to secure the well-being and dignity of all people, building self-respect and the respect of others.

Development is undermined by health concerns as it both directly and indirectly influences growth to be lower. HIV/AIDS in addition to malaria has negatively influenced development and increased poverty in places such as Africa. Achieving adequate health standards is important for the success of development and the abolition of poverty.

The Human Development Index (HDI) is the normalized measure of life expectancy
Life expectancy
Life expectancy is the expected number of years of life remaining at a given age. It is denoted by ex, which means the average number of subsequent years of life for someone now aged x, according to a particular mortality experience...
, literacy
Literacy
Literacy has traditionally been described as the ability to read for knowledge, write coherently and think critically about printed material.Literacy represents the lifelong, intellectual process of gaining meaning from print...
, education
Education
Education in its broadest, general sense is the means through which the aims and habits of a group of people lives on from one generation to the next. Generally, it occurs through any experience that has a formative effect on the way one thinks, feels, or acts...
, standard of living
Standard of living
Standard of living is generally measured by standards such as real income per person and poverty rate. Other measures such as access and quality of health care, income growth inequality and educational standards are also used. Examples are access to certain goods , or measures of health such as...
, and GDP per capita for countries worldwide. It is an improved standard means of measuring well-being, especially child welfare
Welfare economics
Welfare economics is a branch of economics that uses microeconomic techniques to evaluate economic well-being, especially relative to competitive general equilibrium within an economy as to economic efficiency and the resulting income distribution associated with it...
and thus human development. Although this index makes an effort to simplify human development, it is much more complex than any index or set of indicators.

The 2007 report showed a small increase in world HDI in comparison with the previous year's report. This rise was fueled by a general improvement in the developing world, especially of the least developed countries
Least Developed Countries
Least developed country is the name given to a country which, according to the United Nations, exhibits the lowest indicators of socioeconomic development, with the lowest Human Development Index ratings of all countries in the world...
group. This marked improvement at the bottom was offset with a decrease in HDI of high income countries.

In order to reflect the gaps in the Human Development Index, the United Nations came out with the Human Poverty Index (HPI) in 1997. The HPI measures the deficiencies in the three indexes of the human development index: long and healthy life, knowledge and a decent standard of living. The HPI is meant to provide a broader view of human development and is adapted to developed countries to reveal social exclusion.

In September 2000, the United Nations came up with the eight millennium development goals. The eight millennium development goals are:
- eradicate extreme poverty and hunger
- achieve universal primary education
- promote gender equality and empower women
- reduce child mortality
- improve maternal health
- combat HIV/AIDS and other diseases
- ensure environmental sustainability
- develop a global partnership for development
The United Nations made a commitment to accomplish these goals by 2015 and thus make an attempt to promote human development.
The source of this article is wikipedia, the free encyclopedia.  The text of this article is licensed under the GFDL.