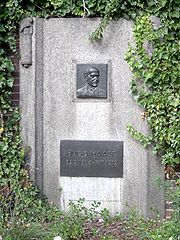 Hugo Haase was a German
Germany
Germany , officially the Federal Republic of Germany , is a federal parliamentary republic in Europe. The country consists of 16 states while the capital and largest city is Berlin. Germany covers an area of 357,021 km2 and has a largely temperate seasonal climate...
politician
Politician
A politician, political leader, or political figure is an individual who is involved in influencing public policy and decision making...
, jurist
Jurist
A jurist or jurisconsult is a professional who studies, develops, applies, or otherwise deals with the law. The term is widely used in American English, but in the United Kingdom and many Commonwealth countries it has only historical and specialist usage...
and pacifist.

Haase was born in Allenstein (Olsztyn
Olsztyn
Olsztyn is a city in northeastern Poland, on the Łyna River. Olsztyn has been the capital of the Warmian-Masurian Voivodeship since 1999. It was previously in the Olsztyn Voivodeship...
), Province of Prussia
Province of Prussia
The Province of Prussia was a province of the Kingdom of Prussia from 1829-1878 created out of the provinces of East Prussia and West Prussia....
, the son of Jewish shoemaker and small businessman, Nathan Haase, and Pauline née Anker. He studied law in Königsberg
Königsberg
Königsberg was the capital of East Prussia from the Late Middle Ages until 1945 as well as the northernmost and easternmost German city with 286,666 inhabitants . Due to the multicultural society in and around the city, there are several local names for it...
(now Kaliningrad) and established himself as a lawyer. He was the first Social Democrat in the municipal council of Königsberg and became a deputy in the Reichstag
Reichstag (German Empire)
The Reichstag was the parliament of the North German Confederation , and of the German Reich ....
in 1897. In multiple legal cases, he defended the Social Democrats against various political attacks.

Haase belonged to the so-called revisionist wing of the party, which in contrast to the Marxists, supported gradual reforms and no longer saw the best path to social and political change in revolution. In 1911 he became along with August Bebel
August Bebel
Ferdinand August Bebel was a German Marxist politician, writer, and orator. He is best remembered as one of the founders of the Social Democratic Party of Germany.-Early years:...
an SPD chairman, in 1912 next to Philipp Scheidemann
Philipp Scheidemann
Philipp Scheidemann was a German Social Democratic politician, who proclaimed the Republic on 9 November 1918, and who became the second Chancellor of the Weimar Republic....
an SPD chairman in the Reichstag. After Bebel's death, Haase and Friedrich Ebert
Friedrich Ebert
Friedrich Ebert was a German politician of the Social Democratic Party of Germany .When Ebert was elected as the leader of the SPD after the death of August Bebel, the party members of the SPD were deeply divided because of the party's support for World War I. Ebert supported the Burgfrieden and...
were chosen as the party chairmen.

In July 1914, he organized the anti-war
World War I
World War I , which was predominantly called the World War or the Great War from its occurrence until 1939, and the First World War or World War I thereafter, was a major war centred in Europe that began on 28 July 1914 and lasted until 11 November 1918...
rally of the SPD and on July 31 and August 1 fought against a decision for an increase in the war credit in the SPD faction. However, he failed to accomplish this because the opposition of Friedrich Ebert and the faction majority. Due to party discipline, Haase had to defend the SPD action in the Reichstag session. In response to his comment "We won't abandon the Fatherland in the hour of danger", the imperial government created its so-called Burgfrieden
Burgfrieden
Burgfrieden—literally "fortress peace" or "castle peace" but more accurately "party truce"—is a German term used for the political truce the Social Democratic Party of Germany and the other political parties agreed to during World War I...
policy.

In the course of the German Revolution
German Revolution
The German Revolution was the politically-driven civil conflict in Germany at the end of World War I, which resulted in the replacement of Germany's imperial government with a republic...
(November), he created along with the majority Social Democrats' leader Friedrich Ebert
Friedrich Ebert
Friedrich Ebert was a German politician of the Social Democratic Party of Germany .When Ebert was elected as the leader of the SPD after the death of August Bebel, the party members of the SPD were deeply divided because of the party's support for World War I. Ebert supported the Burgfrieden and...
the provisional government, the Rat der Volksbeauftragten, of whose acting chairman he took over. After the violent response to the revolutionary Volksmarinedivision during Christmas 1918, Haase and the two other USPD representatives Wilheim Dittman and Emil Barth
Emil Barth
Emil Barth was a German Social Democratic metal worker who became a key figure in the German Revolution of 1918....
abandoned the government on December 29.

On October 8, 1919, Haase was shot by Johann Voss, an apparently mentally ill leather worker. He was severely injured and died on November 7.

He was married to Thea Lichtenstein and had three children: one son Ernst Haase, a psychiatrist, who immigrated to Chicago via England—and two daughters: Hilde Meisels (Jerusalem) and Gertrud Dressel (Tel Aviv).