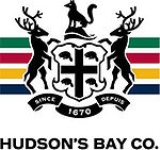 Overview
The Hudson's Bay Company , abbreviated HBC, or "The Bay" ("La Baie" in French) is the oldest commercial corporation
Corporation
A corporation is created under the laws of a state as a separate legal entity that has privileges and liabilities that are distinct from those of its members. There are many different forms of corporations, most of which are used to conduct business. Early corporations were established by charter...
in North America
North America
North America is a continent wholly within the Northern Hemisphere and almost wholly within the Western Hemisphere. It is also considered a northern subcontinent of the Americas...
and one of the oldest in the world. A fur trading
Fur trade
The fur trade is a worldwide industry dealing in the acquisition and sale of animal fur. Since the establishment of world market for in the early modern period furs of boreal, polar and cold temperate mammalian animals have been the most valued...
business for much of its existence, today Hudson's Bay Company owns and operates retail stores
Retailing
Retail consists of the sale of physical goods or merchandise from a fixed location, such as a department store, boutique or kiosk, or by mail, in small or individual lots for direct consumption by the purchaser. Retailing may include subordinated services, such as delivery. Purchasers may be...
throughout Canada
Canada
Canada is a North American country consisting of ten provinces and three territories. Located in the northern part of the continent, it extends from the Atlantic Ocean in the east to the Pacific Ocean in the west, and northward into the Arctic Ocean...
. The company is headquartered in the Simpson Tower
Simpson Tower
The Simpson Tower is the 26th-tallest building in Toronto. Completed in 1968 by architect John B. Parkin, as the headquarters of the Simpsons department store company, it has 33 floors and is 144 metres high. In 1978, as part of a corporate takeover, the Simpson Tower became the property of the...
in Toronto
Toronto
Toronto is the provincial capital of Ontario and the largest city in Canada. It is located in Southern Ontario on the northwestern shore of Lake Ontario. A relatively modern city, Toronto's history dates back to the late-18th century, when its land was first purchased by the British monarchy from...
, Ontario
Ontario
Ontario is a province of Canada, located in east-central Canada. It is Canada's most populous province and second largest in total area. It is home to the nation's most populous city, Toronto, and the nation's capital, Ottawa....
.

The company was incorporated by English
Kingdom of England
The Kingdom of England was, from 927 to 1707, a sovereign state to the northwest of continental Europe. At its height, the Kingdom of England spanned the southern two-thirds of the island of Great Britain and several smaller outlying islands; what today comprises the legal jurisdiction of England...
royal charter
Royal Charter
A royal charter is a formal document issued by a monarch as letters patent, granting a right or power to an individual or a body corporate. They were, and are still, used to establish significant organizations such as cities or universities. Charters should be distinguished from warrants and...
in 1670 as The Governor and Company of Adventurers of England trading into Hudson's Bay and functioned as the de facto
De facto
De facto is a Latin expression that means "concerning fact." In law, it often means "in practice but not necessarily ordained by law" or "in practice or actuality, but not officially established." It is commonly used in contrast to de jure when referring to matters of law, governance, or...
government in parts of North America before Europe
Europe
Europe is, by convention, one of the world's seven continents. Comprising the westernmost peninsula of Eurasia, Europe is generally 'divided' from Asia to its east by the watershed divides of the Ural and Caucasus Mountains, the Ural River, the Caspian and Black Seas, and the waterways connecting...
an states and later the United States
United States
The United States of America is a federal constitutional republic comprising fifty states and a federal district...
laid claim to those territories.