The Houston Ship Channel, located in Houston, Texas
Houston, Texas
Houston is the fourth-largest city in the United States, and the largest city in the state of Texas. According to the 2010 U.S. Census, the city had a population of 2.1 million people within an area of . Houston is the seat of Harris County and the economic center of , which is the ...
, is part of the Port of Houston
Port of Houston
The Port of Houston is a port in Houston—the fourth-largest city in the United States. The Port is a 25-mile-long complex of diversified public and private facilities located a few hours' sailing time from the Gulf of Mexico...
—one of the United States
United States
The United States of America is a federal constitutional republic comprising fifty states and a federal district...
's busiest seaports. The channel
Channel (geography)
In physical geography, a channel is the physical confine of a river, slough or ocean strait consisting of a bed and banks.A channel is also the natural or human-made deeper course through a reef, sand bar, bay, or any shallow body of water...
is the conduit for ocean-going vessels between the Houston-area shipyards and the Gulf of Mexico
Gulf of Mexico
The Gulf of Mexico is a partially landlocked ocean basin largely surrounded by the North American continent and the island of Cuba. It is bounded on the northeast, north and northwest by the Gulf Coast of the United States, on the southwest and south by Mexico, and on the southeast by Cuba. In...
. 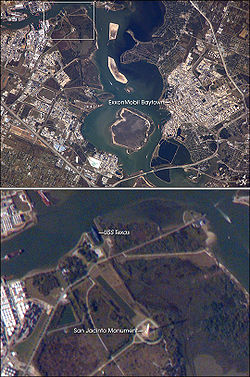 The Ship Channel has numerous terminals
Wharf
A wharf or quay is a structure on the shore of a harbor where ships may dock to load and unload cargo or passengers.Such a structure includes one or more berths , and may also include piers, warehouses, or other facilities necessary for handling the ships.A wharf commonly comprises a fixed...
and berthing locations
Berth (moorings)
A berth is a location in a port or harbour used specifically for mooring vessels while not at sea.-Locations in a port:Berth is the term used in ports and harbors to define a specific location where a vessel may be berthed, usually for the purposes of loading and unloading.Most berths will be...
along Buffalo Bayou and Galveston Bay. The major public terminals include Turning Basin, Barbours Cut
Barbours Cut Terminal
The Barbours Cut Container Terminal, or simply the Barbours Cut Terminal, is a major deep water port in the Greater Houston area in the U.S. state of Texas. Part of the larger Port of Houston complex, Barbours Cut is the largest of the terminals and the first port in Texas to handle standardized...
, and Bayport
Bayport Terminal
The Bayport Container Terminal, or simply the Bayport Terminal, is a major deep water port in the Greater Houston area in Texas . This relatively new terminal, part of the Port of Houston, is designed to handle standardized cargo containers and offload the nearby Barbours Cut Terminal, which has no...
. There are many private docks as well, including the ExxonMobil Baytown Complex and the Deer Park Complex.

The Houston Ship Channel has been periodically widened and deepened to accommodate ever-larger ships, and is currently 530 feet (161.5 m) wide by 45 feet (13.7 m) deep by 50 miles (80.5 km) long. The islands in the ship channel are part of the ongoing widening and deepening project. The islands are formed from soil pulled up by dredging, and the salt marsh
Salt marsh
A salt marsh is an environment in the upper coastal intertidal zone between land and salt water or brackish water, it is dominated by dense stands of halophytic plants such as herbs, grasses, or low shrubs. These plants are terrestrial in origin and are essential to the stability of the salt marsh...
es and bird islands are part of the Houston Port Authority's beneficial use and environmental mitigation
Environmental mitigation
Environmental mitigation, compensatory mitigation, or mitigation banking, are terms used primarily by the United States government and the related environmental industry to describe projects or programs intended to offset known impacts to an existing historic or natural resource such as a stream,...
responsibilities.

The channel has five vehicular crossings. They are the Washburn Tunnel
Washburn Tunnel
The Washburn Tunnel is a two-lane underwater motor-vehicle tunnel connecting Galena Park and Pasadena, two suburbs of Houston, Texas. Completed in 1950, it travels north-south underneath the Houston Ship Channel. It was named after Harris County, Texas Auditor Harry L. Washburn...
, the Sidney Sherman Bridge
Sidney Sherman Bridge
The Sidney Sherman Bridge is a strutted girder bridge in Houston, Texas. It spans the Houston Ship Channel and carries the East Loop segment of Interstate 610 on the east side of the city...
, the Sam Houston Ship Channel Bridge
Sam Houston Ship Channel Bridge
Sam Houston Tollway Ship Channel Bridge is a bridge in Harris County, Texas. It was acquired from the-then Texas Turnpike Authority on May 5, 1994 and is now a part of the Harris County Toll Road Authority system. The bridge opened to traffic in May 1982...
and popularly known as the Beltway 8 Bridge; the Fred Hartman Bridge
Fred Hartman Bridge
The Fred Hartman Bridge or Baytown Bridge is a cable-stayed bridge in the U.S. state of Texas, spanning the Houston Ship Channel. The bridge carries 2.6 miles of State Highway 146, between the cities of Baytown, Texas and La Porte, Texas...
connecting La Porte and Baytown, Texas; and the Lynchburg Ferry
Lynchburg Ferry
The Lynchburg Ferry is a ferry across the Houston Ship Channel in the U.S. state of Texas, connecting Crosby-Lynchburg Road in Lynchburg to the north with the former State Highway 134 and San Jacinto Battleground State Historic Site in La Porte to the south...
.

The channel has been used to move goods to the sea since at least 1836.
The proximity to Texas oilfields led to the establishment of numerous petrochemical refineries
Oil refinery
An oil refinery or petroleum refinery is an industrial process plant where crude oil is processed and refined into more useful petroleum products, such as gasoline, diesel fuel, asphalt base, heating oil, kerosene, and liquefied petroleum gas...
along the waterway, such as the ExxonMobil
ExxonMobil
Exxon Mobil Corporation or ExxonMobil, is an American multinational oil and gas corporation. It is a direct descendant of John D. Rockefeller's Standard Oil company, and was formed on November 30, 1999, by the merger of Exxon and Mobil. Its headquarters are in Irving, Texas...
Baytown installation on the eastern bank of the San Jacinto River.

While much of the Ship Channel is associated with heavy industry, two icons of Texas history
History of Texas
European conquistadors first arrived in the region now known as Texas in 1519, finding the region populated by various Native American tribes...
are also located along its length. The saw service during both World Wars, and is the oldest remaining example of a dreadnought
Dreadnought
The dreadnought was the predominant type of 20th-century battleship. The first of the kind, the Royal Navy's had such an impact when launched in 1906 that similar battleships built after her were referred to as "dreadnoughts", and earlier battleships became known as pre-dreadnoughts...
-era battleship in existence. The nearby San Jacinto Monument
San Jacinto Monument
The San Jacinto Monument is a high column located on the Houston Ship Channel in unincorporated Harris County, Texas near the city of La Porte. The monument is topped with a 220-ton star that commemorates the site of the Battle of San Jacinto, the decisive battle of the Texas Revolution...
commemorates the Battle of San Jacinto
Battle of San Jacinto
The Battle of San Jacinto, fought on April 21, 1836, in present-day Harris County, Texas, was the decisive battle of the Texas Revolution. Led by General Sam Houston, the Texian Army engaged and defeated General Antonio López de Santa Anna's Mexican forces in a fight that lasted just eighteen...
(1836) in which Texas won its independence from Mexico
Mexico
The United Mexican States , commonly known as Mexico , is a federal constitutional republic in North America. It is bordered on the north by the United States; on the south and west by the Pacific Ocean; on the southeast by Guatemala, Belize, and the Caribbean Sea; and on the east by the Gulf of...
.
The US Army's San Jacinto Ordnance Depot
San Jacinto Ordnance Depot
The San Jacinto Ordnance Depot was a United States Army ammunition depot that supplied the Army and Navy during World War II and the Korean War, located on a 4,954-acre reservation on the Houston Ship Channel 15 miles south of Houston, Texas....
was located on the channel from 1941–1964.

On December 25, 2007, the Houston Ship Channel was featured on the CNN Special, Planet in Peril, as a potential polluter of nearby neighborhoods. That year, the University of Texas released a study suggesting that children living within 2 miles (3.2 km) of the Houston Ship Channel were 56 percent more likely to become sick with leukemia
Leukemia
Leukemia or leukaemia is a type of cancer of the blood or bone marrow characterized by an abnormal increase of immature white blood cells called "blasts". Leukemia is a broad term covering a spectrum of diseases...
than the national average.