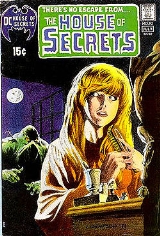 Encyclopedia
The House of Secrets is the name of several mystery
Mystery fiction
Mystery fiction is a loosely-defined term.1.It is often used as a synonym for detective fiction or crime fiction— in other words a novel or short story in which a detective investigates and solves a crime mystery. Sometimes mystery books are nonfiction...
-suspense, anthology
Comics anthology
Comics anthologies collect works in the medium of comics that are too short for standalone publication.- U.S. :- UK :British comics have a long tradition publishing comics anthologies, often weekly...
comic book
Comic book
A comic book or comicbook is a magazine made up of comics, narrative artwork in the form of separate panels that represent individual scenes, often accompanied by dialog as well as including...
series
Ongoing series
The term "ongoing series" is used in contrast to limited series , a one shot , a graphic novel, or a trade paperback...
published by DC Comics
DC Comics
DC Comics, Inc. is one of the largest and most successful companies operating in the market for American comic books and related media. It is the publishing unit of DC Entertainment a company of Warner Bros. Entertainment, which itself is owned by Time Warner...
. It had a companion series titled House of Mystery
House of Mystery
The House of Mystery is the name of several horror-mystery-suspense anthology comic book series. It had a companion series, House of Secrets.-Genesis:...
.

The original Silver Age
Silver Age of Comic Books
The Silver Age of Comic Books was a period of artistic advancement and commercial success in mainstream American comic books, predominantly those in the superhero genre. Following the Golden Age of Comic Books and an interregnum in the early to mid-1950s, the Silver Age is considered to cover the...
series ran 80 issues, from November/December 1956
1956 in comics
- Year overall :* Fredric Wertham's Seduction of the Innocent and the United States Senate Subcommittee on Juvenile Delinquency hearings continue to negatively affect the comics marketplace...
to September/October 1966. In addition to short, 'one-off' stories, several issues beginning with No. 23, August, 1959 featured the adventures of modern-dress sorcerer Mark Merlin. The dual-personality Eclipso
Eclipso
Eclipso is a fictional supervillain in the DC Comics Universe. The character is the incarnation of the Wrath of God and the Angel of Vengeance that turned evil and was replaced by the Spectre...
("Hero and Villain in One Man!") was introduced in issue #61 (Aug. 1963
1963 in comics
- Year overall :DC Comics purchases two Prize Comics romance titles, Young Love and Young Romance, continuing their numbering.Shueisha publishes Margaret.-January:*Fantastic Four #10 - Marvel Comics...
), continuing to the series' end. Prince Ra-Man
Prince Ra-Man
Prince Ra-Man is a fictional comic book magician published by DC Comics. Mark Merlin first appeared in House of Secrets #23 , and was created by Mort Meskin...
the Mind-Master bowed in #73 (Oct. 1965
1965 in comics
See also:1964 in comics,other events of 1965,1966 in comics,1960s in comics and thelist of years in comicsPublications: January - February - March - April - May - June - July - August - September - October - November - December-January:...
) (later retconned into being the same person as Mark Merlin). Other, lesser continuing features included "Peter Puptent, Explorer"; "Dolly and the Professor"; "Doctor Rocket"; and "Moolah the Mystic". The title was cancelled after #80, dated September–October 1966.

This revival, sporting many covers by Neal Adams
Neal Adams
Neal Adams is an American comic book and commercial artist known for helping to create some of the definitive modern imagery of the DC Comics characters Superman, Batman, and Green Arrow; as the co-founder of the graphic design studio Continuity Associates; and as a creators-rights advocate who...
, Bernie Wrightson
Bernie Wrightson
Bernie "Berni" Wrightson is an American artist known for his horror illustrations and comic books.-Biography:...
and Mike Kaluta, ran through issue #154 (Nov. 1978
1978 in comics
This is a list of comics-related events in 1978.- Year overall :* DC suffers the DC Implosion, the abrupt cancellation of more than two dozen ongoing and planned titles, with the vast majority of the books leaving uncompleted storylines .* Archie Goodwin resigns as Marvel Comics editor-in-chief,...
), with three months passing between #140 (April 1976
1976 in comics
This is a list of comics-related events in 1976.- Year overall :* American Splendor, Harvey Pekar's long-running autobiographical comic book title, publishes its debut issue.* Fantagraphics Books, Inc. founded by Gary Groth and Michael Catron....
) and #141 (July 1976). It was then 'merged' into The Unexpected
The Unexpected
The Unexpected was a DC Comics horror comic book, a continuation of Tales of the Unexpected. It ran 117 issues, #105-222, from 1968 to 1982.-Publication history:...
with issue #189, through issue #199. The series was 68 ad-free pages, allowing all three portions to be full-length issues.

The House of Secrets also came to be the name of the actual edifice in which Abel lives. Mike Friedrich
Mike Friedrich
Mike Friedrich is an American comic book writer and publisher best known for his work at Marvel and DC Comics, and for publishing the anthology series Star*Reach, one of the first independent comics...
(writer) and Jerry Grandenetti
Jerry Grandenetti
Charles J. "Jerry" Grandenetti was an American comic book artist and advertising art director, best known for his work with writer-artist Will Eisner on the celebrated comics feature "The Spirit", and for his decade-and-a-half run on many DC Comics war series...
(artist) introduced the house and explained its origins. The Sandman series revealed it exists both in the real world of the DC Universe and in the Dreaming, as a repository for secrets of all kinds.

The building itself was constructed for a Senator Sanderson using only materials from Kentucky
Kentucky
The Commonwealth of Kentucky is a state located in the East Central United States of America. As classified by the United States Census Bureau, Kentucky is a Southern state, more specifically in the East South Central region. Kentucky is one of four U.S. states constituted as a commonwealth...
, and went under the enchantment that only pure-blood Kentuckians would be able to live there. Later, Sanderson's wife went insane in the upper floors, leading the Senator to sell the house. The next four owners, none of them pure Kentuckians, found themselves driven away for various reasons. The following owner attempted to move the home from its original location, but the house tore itself free from its trailer, ran its owner over a cliff to his death, and settled less than 200 yards from the Kentucky state line in a graveyard. Whether by fate or some mystical alignment, the companion House of Mystery stands at the other end of the graveyard. Shortly after this, Abel was driven to the house and entrusted as its caretaker by a man who revealed himself to be an aspect of the House's existence, but making vague references to an employer. Abel was showing living in the House of Mystery in the quarterly DC Special #4, published one month earlier (July-Sept. 1969).

DC's Vertigo imprint revived the name House of Secrets as a new title and concept. Here the House of Secrets was a mobile manor, appearing in different places. The building itself is haunted by the Juris, a group of ghosts who summon those with secrets in order to judge them and pass sentence. To the Juris, all offenses carry the same weight, from rape and murder to simply lying at a crucial moment. A runaway named Rain Harper stumbled upon the House of Secrets and took up a position as an unwilling witness to the Juris trials, validating the judgments and either condemning the tried souls to imprisonment in the basement, or setting them free to live their life purged of their secret.

This House of Secrets series was creator-owned (except for its title which was kind of "licensed" by DC to the series' creators). Indeed, the letters column in issue #6 indicates that they could not, for legal reasons, include Cain and Abel in the stories. However, this series was used for the framing story in the first Vertigo Winter's Edge special, featuring Rain happening upon an art gallery in the house whose paintings allow her to see stories from The Sandman, The Dreaming
The Dreaming (comics)
The Dreaming is a fictional place, a comic book location published by DC Comics. The Dreaming first appeared in the Sandman vol. 2 #1, , and was created by Neil Gaiman and Sam Kieth. The Dreaming is the domain of Dream of the Endless....
, Hellblazer
Hellblazer
Hellblazer is a contemporary horror comic book series, originally published by DC Comics, and subsequently by the Vertigo imprint since March 1993, the month the imprint was introduced, where it remains to this day...
, The Invisibles
The Invisibles
The Invisibles is a comic book series that was published by the Vertigo imprint of DC Comics from 1994 to 2000. It was created and scripted by Scottish writer Grant Morrison, and drawn by various artists throughout its publication....
, The Books of Magic
The Books of Magic
The Books of Magic is a four-issue English-language comic book mini-series written by Neil Gaiman, published by DC Comics, and later an ongoing series under the imprint Vertigo. Since its original publication, the mini-series has also been published in a single-volume collection under the Vertigo...
, The Minx, Sandman Mystery Theatre
Sandman Mystery Theatre
Sandman Mystery Theatre is a comic book series published by Vertigo, the mature-readers imprint of DC Comics. It ran for 70 issues between 1993 and 1999 and retells the adventures of the Sandman, a vigilante whose main weapon is a gun that fires sleeping gas, originally created by DC in the Golden...
and Nevada
Nevada (comics)
Nevada is the title of an American comic book limited series published by DC Comics under its Vertigo imprint in 1998. The series was written by Steve Gerber and with art from Phil Winslade, Steve Leialoha, and Dick Giordano....
.

In the mid-2000s, the Secret Six
Secret Six (comics)
The Secret Six is the name of three different fictional comic book teams in the , plus an alternate universe's fourth team. Each team has had six members, led by a mysterious figure named Mockingbird, whom the characters assume to be one of the other five members.-Original Secret Six:The Secret Six...
made their headquarters in the House of Secrets. Scandal
Scandal (comics)
Scandal Savage is a fictional character, a supervillainess and antiheroine in the DC Comics Universe . She first appeared in Villains United #1 , and was created by Gail Simone and Dale Eaglesham...
stated in issue five of Villains United
Villains United
Villains United is a six-issue comic book limited series, written by Gail Simone with art by Dale Eaglesham and Wade Von Grawbadger, published by DC Comics in 2005...
that the House would not show up on technological scans or mystical surveillance. She also said that Mockingbird claimed the House was a "house of victims."

The House of Secrets appeared in the Young Justice
Young Justice (TV series)
Young Justice is an American animated television series created by Greg Weisman and Brandon Vietti for Cartoon Network. Despite its title, it is not an adaptation of Todd Dezago and Todd Nauck's Young Justice comic series, but rather an adaptation of the entire DC Universe with a focus on young...
episode "Secrets". In the series it was depicted as a magic shop across the street from the house of Greta and Billy Hayes
Harm (comics)
Harm is a fictional supervillain in the DC Comics universe. He first appeared in Young Justice #4 .-Fictional character biography:...
.
The source of this article is wikipedia, the free encyclopedia.  The text of this article is licensed under the GFDL.