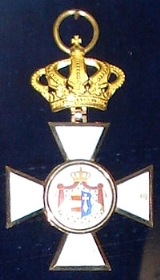 Encyclopedia
The House and Merit Order of Duke Peter Frederick Louis (German: Haus und Verdienstorden von Herzog Peter Friedrich Ludwig) was a civil and military order
Order (decoration)
An order or order of merit is a visible honour, awarded by a government, dynastic house or international organization to an individual, usually in recognition of distinguished service to a nation or to humanity. The distinction between orders and decorations is somewhat vague, except that most...
of the Grand Duchy of Oldenburg, a member state of the German Empire. The order was founded by Grand Duke Friedrich August of Oldenburg on November 27, 1838. It became obsolete in 1918 after the abdication of the last grand duke.

The badge of the order was a white-enameled cross pattée
Cross pattée
A cross pattée is a type of cross which has arms narrow at the centre, and broader at the perimeter. An early English example from the start of the age of heraldry proper A cross pattée (or "cross patty", known also as "cross formée/formy") is a type of cross which has arms narrow at the...
, edged in gold. The cross had a blue enameled center medallion with the crowned monogram of the Peter Frederick Louis in gold. Around the center medallion was a red-enameled ring bearing the motto "Ein Gott, Ein Recht, Eine Wahrheit" ("One God, One Law, One Truth"). Both the center medallion and the ring were edged with a gold rim. On the reverse, the coat of arms of Oldenburg were painted on the medallion. Each arm on the reverse carried dates written in a cursive script: "17 Jan. 1775", "6 Juli 1785", "21 Mai 1829", and "27 Nov. 1838". These dates corresponded to the dates of birth, accession to the throne and death of Peter Frederick Louis, as well as the date of the founding of the order.

The star of the order was an eight-pointed silver star bearing the medallion of the badge.

The ribbon of the order was deep blue with a narrow red stripe near each edge.

The order came in seven classes: Grand Cross with Crown (Großkreuz mit der Krone), Grand Cross (Großkreuz), Grand Commander (Großkomtur), Commander (Komtur), Officer (Offizier), and Knight 1st and 2nd Class (Ritter 1. und 2. Klasse). The Grand Cross with Crown and the Grand Cross consisted of a sash badge and breast star. The Grand Commander consisted of a neck badge and breast star, while the Commander was the neck badge without the star. The Officer's Cross, added in 1903, was a pinback breast badge and differed from the other badges by having a blank reverse and no crown. The Knight 1st and 2nd Class were breast badges, and the 2nd Class differed from the 1st class by not having a crown and being in silver instead of gold (the monogram and motto remained gold, however).

A special chapter of the order, the capitular knights, open only to Oldenburgers, had a badge which consisted of the medallion, surrounded by a green enameled wreath of oak leaves. It came in several classes whose badge differed in whether it was gold or silver and whether it was crowned.

All grades of the order except the medals could be awarded with swords for war merit. The swords were applied diagonally between the arms of the cross. If a recipient of a lower grade with swords received a higher grade without, he wore "swords on ring" on the higher award. These were crossed swords above the badge, usually on the ring from which the badge was suspended (in the case of the Officer's Cross, they were affixed to the top arm). In October 1918, an additional provision was made for a war decoration of a wreath of laurels affixed to the badge and breast star.