Encyclopedia
Hosios Loukas is an historic walled monastery
Monastery
Monastery denotes the building, or complex of buildings, that houses a room reserved for prayer as well as the domestic quarters and workplace of monastics, whether monks or nuns, and whether living in community or alone .Monasteries may vary greatly in size – a small dwelling accommodating only...
situated near the town of Distomo
Distomo
Distomo , older forms: Distomon is a municipality in the Boeotia Prefecture, Greece. Since the 2011 local government reform it is part of the municipality Distomo-Arachova-Antikyra, of which it is the seat and a municipal unit...
, in Boeotia, Greece
Greece
Greece , officially the Hellenic Republic , and historically Hellas or the Republic of Greece in English, is a country in southeastern Europe....
. It is one of the most important monuments of Middle Byzantine architecture
Byzantine architecture
Byzantine architecture is the architecture of the Byzantine Empire. The empire gradually emerged as a distinct artistic and cultural entity from what is today referred to as the Roman Empire after AD 330, when the Roman Emperor Constantine moved the capital of the Roman Empire east from Rome to...
and art
Byzantine art
Byzantine art is the term commonly used to describe the artistic products of the Byzantine Empire from about the 5th century until the Fall of Constantinople in 1453....
, and has been listed on UNESCO
UNESCO
The United Nations Educational, Scientific and Cultural Organization is a specialized agency of the United Nations...
's World Heritage Site
World Heritage Site
A UNESCO World Heritage Site is a place that is listed by the UNESCO as of special cultural or physical significance...
s, along with the monasteries of Nea Moni and Daphnion.

The monastery of Hosios Loukas is situated at a scenic site on the slopes of Mount Helicon. It was founded in the early 10th century by the hermit
Hermit
A hermit is a person who lives, to some degree, in seclusion from society.In Christianity, the term was originally applied to a Christian who lives the eremitic life out of a religious conviction, namely the Desert Theology of the Old Testament .In the...
, Venerable
Venerable
The Venerable is used as a style or epithet in several Christian churches. It is also the common English-language translation of a number of Buddhist titles.-Roman Catholic:...
(Greek: Hosios) St. Luke
Luke of Steiris
Luke of Steiris was a Byzantine saint of the tenth century AD who lived in the themes of Hellas and Peloponnese in Greece. His relics are preserved in his monastery of Hosios Loukas. The principal source for Luke's life is an anonymous Life written by a monk of Hosios Loukas who had been one of...
(Greek: Lukas), whose relics are kept in the monastery to this day. The hermit (who died on 7 February 953) was famous for having predicted the conquest of Crete
Crete
Crete is the largest and most populous of the Greek islands, the fifth largest island in the Mediterranean Sea, and one of the thirteen administrative regions of Greece. It forms a significant part of the economy and cultural heritage of Greece while retaining its own local cultural traits...
by Emperor Romanos. It was unclear if he was referring to Romanos I
Romanos I
Romanos I Lekapenos was Byzantine Emperor from 920 until his deposition on December 16, 944.-Origin:...
, the emperor at the time. However the island was actually reconquered by Nicephorus Phocas under Romanos II
Romanos II
Romanos  II was a Byzantine emperor. He succeeded his father Constantine VII in 959 at the age of twenty-one, and died suddenly in 963.-Life:...
. It is believed that it was during the latter's reign (959-963) that the Church of the Theotokos
Theotokos
Theotokos is the Greek title of Mary, the mother of Jesus used especially in the Eastern Orthodox, Oriental Orthodox, and Eastern Catholic Churches. Its literal English translations include God-bearer and the one who gives birth to God. Less literal translations include Mother of God...
(Panagia
Panagia
Panagia , also transliterated Panayia or Panaghia, is one of the titles of Mary, the mother of Jesus, used especially in Orthodox Christianity....
) was constructed.

The main shrine of the monastery is the tomb of St. Luke, originally situated in the vault, but later placed at the juncture of the two churches. The monastery derived its wealth (including funds required for construction) from the fact that the relics of St. Luke were said to have exuded myron, a sort of perfumed oil which produced healing miracles. Pilgrims hoping for miraculous help were encouraged to sleep by the side of the tomb in order to be healed by incubation
Incubation (ritual)
Incubation is the religious practice of sleeping in a sacred area with the intention of experiencing a divinely inspired dream or cure. Incubation was practised by many ancient cultures...
. The mosaic
Mosaic
Mosaic is the art of creating images with an assemblage of small pieces of colored glass, stone, or other materials. It may be a technique of decorative art, an aspect of interior decoration, or of cultural and spiritual significance as in a cathedral...
s around the tomb represent not only St. Luke himself, but also hegumen
Hegumen
Hegumen, hegumenos, igumen, or ihumen is the title for the head of a monastery of the Eastern Orthodox Church or Eastern Catholic Churches, similar to the one of abbot. The head of a convent of nuns is called hegumenia or ihumenia . The term means "the one who is in charge", "the leader" in...
Philotheos offering a likeness of the newly-built church to the saint.

The Church of the Theotokos, the oldest in the complex, is the only church known with certainty to have been built in mainland Greece in the tenth century. This centralized parallelogram-shaped building is the oldest example of the cross-in-square type in the country; its plan closely follows that of Lips Monastery in Constantinople
Constantinople
Constantinople was the capital of the Roman, Eastern Roman, Byzantine, Latin, and Ottoman Empires. Throughout most of the Middle Ages, Constantinople was Europe's largest and wealthiest city.-Names:...
. The walls are opus mixtum
Opus mixtum
thumb|right|275px|Example of Opus mixtum in the [[Brest Castle]], [[France]].Opus mixtum , or Opus vagecum and Opus compositum, was an ancient Roman construction technique...
(part brick, part stone, part marble) and display curious pseudo-kufic
Pseudo-Kufic
Pseudo-Kufic, or Kufesque, also sometimes Pseudo-Arabic, refers to imitations of the Arabic Kufic script, or sometimes Arabic cursive script, made in a non-Arabic context, during the Middle-Ages or the Renaissance: "Imitations of Arabic in European art are often described as pseudo-Kufic, borrowing...
patterns.

The Church of the Theotokos adjoins a larger cathedral church, or Katholikon
Katholikon
A Katholikon or Catholicon is the major temple of a monastery, or diocese in the Eastern Orthodox Church. The name derives from the fact that it is the largest temple where all gather together to celebrate the major feast days of the liturgical year. At other times, the smaller temples or...
, tentatively dated to 1011-12. The Katholikon is the earliest extant domed-octagon church, with eight piers arranged around the perimeter of the naos
Cella
A cella or naos , is the inner chamber of a temple in classical architecture, or a shop facing the street in domestic Roman architecture...
(nave
Nave
In Romanesque and Gothic Christian abbey, cathedral basilica and church architecture, the nave is the central approach to the high altar, the main body of the church. "Nave" was probably suggested by the keel shape of its vaulting...
). The hemispherical dome
Dome
A dome is a structural element of architecture that resembles the hollow upper half of a sphere. Dome structures made of various materials have a long architectural lineage extending into prehistory....
(without a drum) rests upon four squinch
Squinch
A squinch in architecture is a construction filling in the upper angles of a square room so as to form a base to receive an octagonal or spherical dome...
es which make a transition from the octagonal base under the dome to the square defined by the walls below. The main cube of the church is surrounded by galleries and chapels on all four sides. 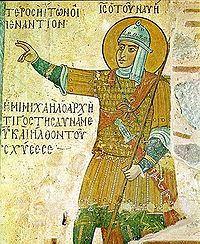 Hosios Loukas is the largest of three monasteries surviving from the Middle Byzantine period in Greece. It differs from the Daphnion and Nea Moni in that it is dedicated to a single military saint
Military saint
The military saints or warrior saints of the Early Christian Church are prominent in the history of Christianity...
. St. Lukes' prophecy about the reconquest of Crete is commemorated by the image of Joshua
Joshua
Joshua , is a minor figure in the Torah, being one of the spies for Israel and in few passages as Moses's assistant. He turns to be the central character in the Hebrew Bible's Book of Joshua...
on the exterior wall of the Panagia church: Joshua was considered a model "warrior of the faith", whose help was especially effective in the wars waged against the Arabs. The Katholikon contains the best preserved complex of mosaic
Mosaic
Mosaic is the art of creating images with an assemblage of small pieces of colored glass, stone, or other materials. It may be a technique of decorative art, an aspect of interior decoration, or of cultural and spiritual significance as in a cathedral...
s from the period of the Macedonian Renaissance
Macedonian Renaissance
Macedonian Renaissance is a label sometimes used to describe the period of the Macedonian dynasty of the Byzantine Empire , especially the 10th century, which some scholars have seen as a time of increased interest in classical scholarship and the assimilation of classical motifs into Christian...
. However, the complex is not complete: the original image of Christ Pantocrator
Christ Pantocrator
In Christian iconography, Christ Pantokrator refers to a specific depiction of Christ. Pantocrator or Pantokrator is a translation of one of many Names of God in Judaism...
inside the dome is missing, as are the figures of archangels normally placed between the upper windows.

There is evidence that the monastery was reputed all over Byzantium for its lavish decoration, liberally applied to all surfaces. Apart from revetment, carving, gold and silver plate, mural
Mural
A mural is any piece of artwork painted or applied directly on a wall, ceiling or other large permanent surface. A particularly distinguishing characteristic of mural painting is that the architectural elements of the given space are harmoniously incorporated into the picture.-History:Murals of...
s, and mosaics (especially imposing on curving surfaces), the interior featured a choice assortment of icon
Icon
An icon is a religious work of art, most commonly a painting, from Eastern Christianity and in certain Eastern Catholic churches...
s, chandelier
Chandelier
A chandelier is a branched decorative ceiling-mounted light fixture with two or more arms bearing lights. Chandeliers are often ornate, containing dozens of lamps and complex arrays of glass or crystal prisms to illuminate a room with refracted light...
s, silk curtains, and altar cloth
Altar cloth
An ' is used by various religious groups to cover an altar. Christianity, ancient Judaism, and Buddhism are among the world religions that use altar cloths....
s. Only a fraction of these items are still in situ
In situ
In situ is a Latin phrase which translated literally as 'In position'. It is used in many different contexts.-Aerospace:In the aerospace industry, equipment on board aircraft must be tested in situ, or in place, to confirm everything functions properly as a system. Individually, each piece may...
, most notably colored marble facings and window grilles. Notwithstanding the losses, the Katholikon "gives the best impression available anywhere today of the character of a church interior in the first centuries after the end of Iconoclasm
Iconoclasm
Iconoclasm is the deliberate destruction of religious icons and other symbols or monuments, usually with religious or political motives. It is a frequent component of major political or religious changes...
".