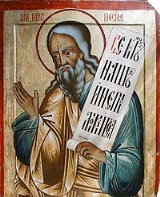 Hosea was the son of Beeri
Beeri
Beeri was the father of the prophet Hosea.Jewish tradition says that he only uttered a few words of prophecy, and as they were insufficient to be embodied in a book by themselves they were incorporated within the book of Isaiah, viz., verses 19 and 20 of the 8th chapter. As such, Beeri is...
and a prophet in Israel in the 8th century BC
8th century BC
The 8th century BC started the first day of 800 BC and ended the last day of 701 BC.-Overview:The 8th century BC was a period of great changes in civilizations. In Egypt, the 23rd and 24th dynasties led to rule from Nubia in the 25th Dynasty...
. He is one of the Twelve Prophets of the Jewish Hebrew Bible
Hebrew Bible
The Hebrew Bible is a term used by biblical scholars outside of Judaism to refer to the Tanakh , a canonical collection of Jewish texts, and the common textual antecedent of the several canonical editions of the Christian Old Testament...
, also known as the Minor Prophets of the Christian Old Testament
Old Testament
The Old Testament, of which Christians hold different views, is a Christian term for the religious writings of ancient Israel held sacred and inspired by Christians which overlaps with the 24-book canon of the Masoretic Text of Judaism...
. Hosea is often seen as a "prophet of doom", but underneath his message of destruction is a promise of restoration. The Talmud
Talmud
The Talmud is a central text of mainstream Judaism. It takes the form of a record of rabbinic discussions pertaining to Jewish law, ethics, philosophy, customs and history....
(Pesachim 87a) claims from God that he was the greatest prophet of his generation, which included the more famous Isaiah.

Little is known about the life or social status of Hosea. According to the Book of Hosea
Book of Hosea
The Book of Hosea is one of the books of the Hebrew Bible. It stands first in order among what are known as the twelve Minor Prophets.-Background and Content:...
, he married the prostitute Gomer
Gomer (wife of Hosea)
Gomer was the adulterous wife of the prophet Hosea, mentioned in the Hebrew Bible's Book of Hosea. Hosea 1:2 refers to her alternatively as a "promiscuous woman" , a "harlot" , and a "whore" but Hosea is told to marry her...
, the daughter of Diblaim, at God
God
God is the English name given to a singular being in theistic and deistic religions who is either the sole deity in monotheism, or a single deity in polytheism....
's command. He lived in the Northern Kingdom in the period 780–725 BC. In ff., there is a reference to the wars which led to the capture of the kingdom by the Assyrians (ca. 734–732 BC). It is not certain if he has also experienced the destruction of Samaria
Samaria
Samaria, or the Shomron is a term used for a mountainous region roughly corresponding to the northern part of the West Bank.- Etymology :...
, which is foreseen in .

Hosea's family life reflected the "adulterous" relationship which Israel had built with polytheistic gods. The relationship between Hosea and Gomer parallels the relationship between God and Israel. Even though Gomer runs away from Hosea and sleeps with another man, he loves her anyway and forgives her. Likewise, even though the people of Israel worshipped other gods, God continued to love them and did not abandon his covenant with them.

Similarly, his children's names made them like walking prophecies of the fall of the ruling dynasty and the severed covenant with God – much like the prophet Isaiah
Isaiah
Isaiah ; Greek: ', Ēsaïās ; "Yahu is salvation") was a prophet in the 8th-century BC Kingdom of Judah.Jews and Christians consider the Book of Isaiah a part of their Biblical canon; he is the first listed of the neviim akharonim, the later prophets. Many of the New Testament teachings of Jesus...
a generation later. The name of Hosea's daughter, Lo-ruhamah, which translates as "not pitied," is chosen by God as a sign of displeasure with the people of Israel for following other gods. (In Hosea 2:23 she is redeemed, shown mercy with the term Ruhamah.) The name of Hosea's son, Lo-ammi, which translates as "not my people," is chosen by the Lord as a sign of the Lord's displeasure with the people of Israel for following other gods (see Hosea 1:8-9).

One of the early writing prophets, Hosea used his own experience as a symbolic representation of God and Israel: God the husband, Israel the wife. Hosea's wife left him to go with other men; Israel left the Lord to go with other gods. Hosea searched for his wife, found her and brought her back; God would not abandon Israel and brought them back even though they had forsaken him.

The book of Hosea was a severe warning to the northern kingdom against the growing idolatry being practiced there; the book was a dramatic call to repentance. Christians extend the analogy of Hosea to Christ and the church: Christ the husband, his church the bride. Christians see in this book a comparable call to the church not to forsake the Lord Jesus Christ. Christians also take the buying back of Gomer as the redemptive qualities of Jesus Christ's sacrifice on the cross.

Other preachers, like Charles Spurgeon, saw Hosea as a striking presentation of the mercy of God in his sermon on Hosea 1:7 titled The LORD's Own Salvation. “But I will have mercy upon the house of Judah, and will save them by the Lord their God, and will not save them by bow, nor by sword, nor by battle, by horses, nor by horsemen.”-Hosea 1:7 in his sermon NO. 2057, December 16TH, 1888.

He is commemorated with the other Minor prophet
Minor prophet
Minor prophets is a book of the Hebrew Bible, so named because it contains twelve shorter prophetic works. In Christian Bibles the twelve are presented as individual books...
s in the Calendar of saints
Calendar of Saints (Armenian Apostolic Church)
-January:* 1 Third Day of the Fast of the Nativity* 2 Fourth Day of the Fast of the Nativity* 3 Fifth Day of the Fast of the Nativity* 4 Sixth Day of the Fast of the Nativity* 5 Eve of the Nativity and Theophany of our Lord Jesus Christ...
of the Armenian Apostolic Church
Armenian Apostolic Church
The Armenian Apostolic Church is the world's oldest National Church, is part of Oriental Orthodoxy, and is one of the most ancient Christian communities. Armenia was the first country to adopt Christianity as its official religion in 301 AD, in establishing this church...
on July 31. He is commemorated on the Eastern Orthodox liturgical calendar
Eastern Orthodox liturgical calendar
The Eastern Orthodox liturgical calendar describes and dictates the rhythm of the life of the Eastern Orthodox Church. Associated with each date are passages of Holy Scripture, Saints and events for commemoration, and many times special rules for fasting or feasting that correspond to the day of...
, with a feast day on October 17 (for those churches which follow the Julian Calendar
Julian calendar
The Julian calendar began in 45 BC as a reform of the Roman calendar by Julius Caesar. It was chosen after consultation with the astronomer Sosigenes of Alexandria and was probably designed to approximate the tropical year .The Julian calendar has a regular year of 365 days divided into 12 months...
, October 17 currently falls on October 30 of the modern Gregorian Calendar
Gregorian calendar
The Gregorian calendar, also known as the Western calendar, or Christian calendar, is the internationally accepted civil calendar. It was introduced by Pope Gregory XIII, after whom the calendar was named, by a decree signed on 24 February 1582, a papal bull known by its opening words Inter...
). He is also commemorated on the Sunday of the Holy Fathers (the Sunday before the Nativity of the Lord
Christmas
Christmas or Christmas Day is an annual holiday generally celebrated on December 25 by billions of people around the world. It is a Christian feast that commemorates the birth of Jesus Christ, liturgically closing the Advent season and initiating the season of Christmastide, which lasts twelve days...
).

The tomb of Hosea is a structure located in the Jewish cemetery of Safed
Safed
Safed , is a city in the Northern District of Israel. Located at an elevation of , Safed is the highest city in the Galilee and of Israel. Due to its high elevation, Safed experiences warm summers and cold, often snowy, winters...
, believed to be the final resting place of Hosea.