Encyclopedia
Hoechst stains are part of a family of blue fluorescent dyes used to stain
Staining (biology)
Staining is an auxiliary technique used in microscopy to enhance contrast in the microscopic image. Stains and dyes are frequently used in biology and medicine to highlight structures in biological tissues for viewing, often with the aid of different microscopes...
DNA
DNA
Deoxyribonucleic acid is a nucleic acid that contains the genetic instructions used in the development and functioning of all known living organisms . The DNA segments that carry this genetic information are called genes, but other DNA sequences have structural purposes, or are involved in...
. These Bis-benzimides
Bisbenzimide
BisbenzimideFormulaC25H24N6OMolecular mass533.88 amuBisbenzimide is an organic compound used as a fluorescent stain for DNA in molecular biology applications. It is an intercalating agent between Adenine-Thymine base pairs...
were originally developed by the Hoechst AG
Hoechst AG
Hoechst AG was a German chemicals then life-sciences company that became Aventis Deutschland after its merger with France's Rhône-Poulenc S.A. in 1999...
, which numbered all their compounds so that the dye Hoechst 33342 is the 33342nd compound made by the company. There are three related Hoechst stains: Hoechst 33258, Hoechst 33342, and Hoechst 34580. The dyes Hoechst 33258 and Hoechst 33342 are the ones most commonly used and they have similar excitation
Excited state
Excitation is an elevation in energy level above an arbitrary baseline energy state. In physics there is a specific technical definition for energy level which is often associated with an atom being excited to an excited state....
/emission
Emission
Emission may refer to:* Flue gas, also:** Exhaust gas, flue gas occurring as a result of the combustion of a fuel* Emission of air pollutants...
spectra
Spectrum
A spectrum is a condition that is not limited to a specific set of values but can vary infinitely within a continuum. The word saw its first scientific use within the field of optics to describe the rainbow of colors in visible light when separated using a prism; it has since been applied by...
.

Both dyes are excited by ultraviolet
Ultraviolet
Ultraviolet light is electromagnetic radiation with a wavelength shorter than that of visible light, but longer than X-rays, in the range 10 nm to 400 nm, and energies from 3 eV to 124 eV...
light at around 350 nm, and both emit blue/cyan fluorescent
Fluorescence
Fluorescence is the emission of light by a substance that has absorbed light or other electromagnetic radiation of a different wavelength. It is a form of luminescence. In most cases, emitted light has a longer wavelength, and therefore lower energy, than the absorbed radiation...
light around an emission
Emission
Emission may refer to:* Flue gas, also:** Exhaust gas, flue gas occurring as a result of the combustion of a fuel* Emission of air pollutants...
maximum at 461 nm. Unbound dye has its maximum fluorescence emission in the 510-540 nm range. Hoechst stains can be excited with a xenon-
Xenon arc lamp
A xenon arc lamp is a specialized type of gas discharge lamp, an electric light that produces light by passing electricity through ionized xenon gas at high pressure to produce a bright white light that closely mimics natural sunlight...
or mercury-arc lamp
Mercury-vapor lamp
A mercury-vapor lamp is a gas discharge lamp that uses an electric arc through vaporized mercury to produce light. The arc discharge is generally confined to a small fused quartz arc tube mounted within a larger borosilicate glass bulb...
or with an ultraviolet laser
Laser
A laser is a device that emits light through a process of optical amplification based on the stimulated emission of photons. The term "laser" originated as an acronym for Light Amplification by Stimulated Emission of Radiation...
. There is a considerable Stokes shift
Stokes shift
Stokes shift is the difference between positions of the band maxima of the absorption and emission spectra of the same electronic transition. It is named after Irish physicist George G. Stokes. When a system absorbs a photon, it gains energy and enters an excited state...
between the excitation and emission spectra that makes Hoechst dyes useful in experiments in which multiple fluorophores are used. The fluorescence intensity of Hoechst dyes also increases with the pH
PH
In chemistry, pH is a measure of the acidity or basicity of an aqueous solution. Pure water is said to be neutral, with a pH close to 7.0 at . Solutions with a pH less than 7 are said to be acidic and solutions with a pH greater than 7 are basic or alkaline...
of the solvent
Solvent
A solvent is a liquid, solid, or gas that dissolves another solid, liquid, or gaseous solute, resulting in a solution that is soluble in a certain volume of solvent at a specified temperature...
.

Hoechst dyes are soluble in water
Water
Water is a chemical substance with the chemical formula H2O. A water molecule contains one oxygen and two hydrogen atoms connected by covalent bonds. Water is a liquid at ambient conditions, but it often co-exists on Earth with its solid state, ice, and gaseous state . Water also exists in a...
and in organic solvent
Solvent
A solvent is a liquid, solid, or gas that dissolves another solid, liquid, or gaseous solute, resulting in a solution that is soluble in a certain volume of solvent at a specified temperature...
s such as dimethyl formamide or dimethyl sulfoxide
Dimethyl sulfoxide
Dimethyl sulfoxide is an organosulfur compound with the formula 2SO. This colorless liquid is an important polar aprotic solvent that dissolves both polar and nonpolar compounds and is miscible in a wide range of organic solvents as well as water...
. Concentrations can be achieved of up to 10 mg/mL. Aqueous solution
Aqueous solution
An aqueous solution is a solution in which the solvent is water. It is usually shown in chemical equations by appending aq to the relevant formula, such as NaCl. The word aqueous means pertaining to, related to, similar to, or dissolved in water...
s are stable at 2-6 °C for at least six months when protected from light. For long-term storage the solutions are instead frozen at ≤-20 °C. 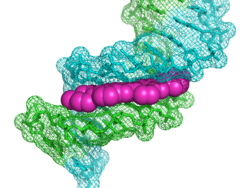 The dyes bind to the minor groove of double-stranded DNA with a preference for sequences rich in adenine
Adenine
Adenine is a nucleobase with a variety of roles in biochemistry including cellular respiration, in the form of both the energy-rich adenosine triphosphate and the cofactors nicotinamide adenine dinucleotide and flavin adenine dinucleotide , and protein synthesis, as a chemical component of DNA...
and thymidine
Thymidine
Thymidine is a chemical compound, more precisely a pyrimidine deoxynucleoside. Deoxythymidine is the DNA nucleoside T, which pairs with deoxyadenosine in double-stranded DNA...
. Although the dyes can bind to all nucleic acids, AT-rich double-stranded DNA strands enhance fluorescence considerably. Hoechst dyes are cell-permeable
Semipermeable membrane
A semipermeable membrane, also termed a selectively permeable membrane, a partially permeable membrane or a differentially permeable membrane, is a membrane that will allow certain molecules or ions to pass through it by diffusion and occasionally specialized "facilitated diffusion".The rate of...
and can bind to DNA in live or fixed cells
Fixation (histology)
In the fields of histology, pathology, and cell biology, fixation is a chemical process by which biological tissues are preserved from decay, thereby preventing autolysis or putrefaction...
. Therefore, these stains are often called supravital, which means that cells survive a treatment with these compounds. Cells that express specific ATP-binding cassette transporter proteins can also actively transport these stains out of their cytoplasm
Cytoplasm
The cytoplasm is a small gel-like substance residing between the cell membrane holding all the cell's internal sub-structures , except for the nucleus. All the contents of the cells of prokaryote organisms are contained within the cytoplasm...
.

A concentration of 0.1-12 µg/ml is commonly used to stain DNA in bacteria or eukaryotic cells. Cells are stained for 1-30 min at room temperature or 37 °C and then washed to remove unbound dye. A green fluorescence of unbound Hoechst dye may be observed on samples which were stained with too much dye or which were not washed thoroughly. Hoechst dyes are often used as substitutes for another nucleic acid stain called DAPI
DAPI
DAPI or 4',6-diamidino-2-phenylindole is a fluorescent stain that binds strongly to A-T rich regions in DNA. It is used extensively in fluorescence microscopy...
.

Key differences between Hoechst dyes and DAPI are:

Hoechst 33342 and 33258 are quenched
Quenching (fluorescence)
Quenching refers to any process which decreases the fluorescence intensity of a given substance. A variety of processes can result in quenching, such as excited state reactions, energy transfer, complex-formation and collisional quenching. As a consequence, quenching is often heavily dependent on...
by Bromodeoxyuridine
Bromodeoxyuridine
Bromodeoxyuridine is a synthetic nucleoside that is an analogue of thymidine. BrdU is commonly used in the detection of proliferating cells in living tissues....
(BrdU), which is commonly used to detect dividing cells. Cells can integrate BrdU in newly synthesized DNA as a substitute for thymidine
Thymidine
Thymidine is a chemical compound, more precisely a pyrimidine deoxynucleoside. Deoxythymidine is the DNA nucleoside T, which pairs with deoxyadenosine in double-stranded DNA...
. When BrdU is integrated into DNA, it is supposed that the bromine
Bromine
Bromine ") is a chemical element with the symbol Br, an atomic number of 35, and an atomic mass of 79.904. It is in the halogen element group. The element was isolated independently by two chemists, Carl Jacob Löwig and Antoine Jerome Balard, in 1825–1826...
deforms the minor groove so that Hoechst dyes cannot reach their optimal binding site. Binding of Hoechst dyes is even stronger to BrdU-substituted DNA; however, no fluorescence ensues. Hoechst dyes can be used together with BrdU to monitor cell cycle
Cell cycle
The cell cycle, or cell-division cycle, is the series of events that takes place in a cell leading to its division and duplication . In cells without a nucleus , the cell cycle occurs via a process termed binary fission...
progression.

Hoechst dyes are commonly used to stain genomic DNA in the following applications:

Because Hoechst stains bind to DNA, they interfere with DNA replication
DNA replication
DNA replication is a biological process that occurs in all living organisms and copies their DNA; it is the basis for biological inheritance. The process starts with one double-stranded DNA molecule and produces two identical copies of the molecule...
during cell division
Mitosis
Mitosis is the process by which a eukaryotic cell separates the chromosomes in its cell nucleus into two identical sets, in two separate nuclei. It is generally followed immediately by cytokinesis, which divides the nuclei, cytoplasm, organelles and cell membrane into two cells containing roughly...
. Consequently, they are potentially mutagen
Mutagen
In genetics, a mutagen is a physical or chemical agent that changes the genetic material, usually DNA, of an organism and thus increases the frequency of mutations above the natural background level. As many mutations cause cancer, mutagens are therefore also likely to be carcinogens...
ic and carcinogen
Carcinogen
A carcinogen is any substance, radionuclide, or radiation that is an agent directly involved in causing cancer. This may be due to the ability to damage the genome or to the disruption of cellular metabolic processes...
ic, so care should be taken in their handling and disposal. Hoechst stain is used to sort sperm
Sperm sorting
Sperm sorting is a means of choosing what type of sperm cell is to fertilize the egg cell. It can be used to sort out sperm that are most healthy, as well as determination of more specific traits, such as sex selection in which spermatozoa are separated into X- and Y- chromosome bearing...
in livestock and humans. Its safety has been debated.