Encyclopedia
A hockey helmet is worn by players of ice hockey
Ice hockey
Ice hockey, often referred to as hockey, is a team sport played on ice, in which skaters use wooden or composite sticks to shoot a hard rubber puck into their opponent's net. The game is played between two teams of six players each. Five members of each team skate up and down the ice trying to take...
and inline hockey
Inline hockey
Inline hockey, often referred to as roller hockey in the United States, is a sport similar to ice hockey but played with inline skates. Like its parent sport, skaters on two teams use hockey sticks to direct a disk-shaped puck into the opponent's goal; however, various details of the game, such as...
to help protect the head from potential injury
Injury
-By cause:*Traumatic injury, a body wound or shock produced by sudden physical injury, as from violence or accident*Other injuries from external physical causes, such as radiation injury, burn injury or frostbite*Injury from infection...
when hit by the puck
Hockey puck
A puck is a disk used in various games serving the same functions as a ball does in ball games. The best-known use of pucks is in ice hockey, a major international sport.- Etymology :The origin of the word "puck" is obscure...
, sticks
Hockey stick
A hockey stick is a piece of equipment used in field hockey, ice hockey or roller hockey to move the ball or puck.- Field hockey :Field hockey sticks have an end which varies in shape, often depending on the players position...
, skates, boards, other players, or the ice.

Hockey helmet
Helmet
A helmet is a form of protective gear worn on the head to protect it from injuries.Ceremonial or symbolic helmets without protective function are sometimes used. The oldest known use of helmets was by Assyrian soldiers in 900BC, who wore thick leather or bronze helmets to protect the head from...
s grip the head from inside by cupping the back of head, or the occipital protuberance
External occipital protuberance
Near the middle of the occipital squama is the external occipital protuberance, and extending lateralward from it on either side is the superior nuchal line, and above this the faintly marked highest nuchal line.It is less pronounced in females....
. Helmet manufacturers will have a chart that relates their helmet sizes to head measurements.

Most helmets have tool-free adjustments, but on older models, the helmet size is adjusted by loosening the screws on the side to slide the front portion forward or back.

The shell of a hockey helmet is made of a substance called vinyl nitrile that disperses force from the point of contact, while the liner may be made of either vinyl nitrile foam or expanded polypropylene foam to absorbs the energy, to reduce the chances of concussion.


Helmets in the National Hockey League 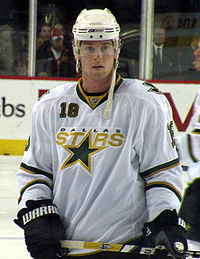 In August 1979, then president of the National Hockey League
National Hockey League
The National Hockey League is an unincorporated not-for-profit association which operates a major professional ice hockey league of 30 franchised member clubs, of which 7 are currently located in Canada and 23 in the United States...
(NHL), John Ziegler
John Ziegler (sports administrator)
John A. Ziegler, Jr was the fourth president of the National Hockey League.In 1977, Ziegler became the fourth president of the NHL, succeeding Clarence Campbell...
, announced that protective helmets would become mandatory in the NHL. "The introduction of the helmet rule will be an additional safety factor," he said. The only exception to the rule are players—after signing a waiver form—who signed pro contracts prior to June 1, 1979. Essentially, this grandfather clause
Grandfather clause
Grandfather clause is a legal term used to describe a situation in which an old rule continues to apply to some existing situations, while a new rule will apply to all future situations. It is often used as a verb: to grandfather means to grant such an exemption...
allowed hockey's veterans to choose whether or not they wanted to wear helmets but forced all new players to wear them. 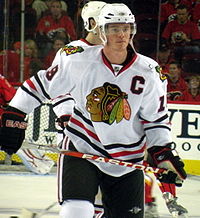 It was not until the death of Bill Masterton
Bill Masterton
William J. Masterton was a Canadian-American professional ice hockey centre who played one season in the National Hockey League for the Minnesota North Stars before succumbing to an injury he suffered during a game against the Oakland Seals in 1968...
that the stigma started to change. On January 13, 1968 in a game between the Minnesota North Stars
Minnesota North Stars
The Minnesota North Stars were a professional ice hockey team in the National Hockey League for 26 seasons, from 1967 to 1993. The North Stars played their home games at the Met Center in Bloomington, and the team's colors for most of its history were green, yellow, gold and white...
and Oakland Seals, two Seals' players, Larry Cahan
Larry Cahan
Lawrence Louis Henry "Hank" Cahan , nicknamed Hank, was a Canadian professional ice hockey player who played in several Canadian and U.S...
and Ron Harris
Ron Harris (ice hockey)
Ronald Thomas Harris is a retired professional ice hockey player who played 476 games in the National Hockey League. He played for the Detroit Red Wings, Oakland Seals, Atlanta Flames, and New York Rangers....
, hit Masterton, sending him flying. Masterton's head hit the ice hard. With blood running from his nose and ears, he was rushed to the hospital. Four doctors worked for 30 hours to try to save him, but were unsuccessful as he died of "massive brain injury". Eleven years later, the NHL mandated the use of helmets. By that time, 70% of players were already wearing them.

A visor or shield in ice hockey is a device attached to the front of a helmet to reduce potential of injury to the face
Face
The face is a central sense organ complex, for those animals that have one, normally on the ventral surface of the head, and can, depending on the definition in the human case, include the hair, forehead, eyebrow, eyelashes, eyes, nose, ears, cheeks, mouth, lips, philtrum, temple, teeth, skin, and...
. Visors cover the upper half of the face, while full face shields cover the entire face. There is currently a great debate about whether NHL players should be forced to wear visors like they are with helmets. A series of eye injuries, most notably that to Bryan Berard
Bryan Berard
Bryan Wallace Berard is a former American professional ice hockey player. He was the first overall pick in the 1995 NHL Entry Draft by the Ottawa Senators. He is most noted for a debilitating eye injury he received early in his career...
, have led to a call from many to enforce their wearing. Currently 60% of NHL players wear visors. Many other leagues around the world mandate the use of visors. Visors and shields, made of a high impact-resistant plastic, offer better overall vision than the wire cages available, which can obscure vision in certain areas. The face shield provides excellent straight ahead and peripheral vision, but does not provide as good air flow as the cage. This can cause the shield to fog up during play.

A cage in ice hockey is a device attached to the front of a helmet to reduce potential of injury to the face
Face
The face is a central sense organ complex, for those animals that have one, normally on the ventral surface of the head, and can, depending on the definition in the human case, include the hair, forehead, eyebrow, eyelashes, eyes, nose, ears, cheeks, mouth, lips, philtrum, temple, teeth, skin, and...
. It consists of a metal or composite mesh that covers the entire face, although some half cages do exist (to protect the eyes while allowing full airflow). The bars, or cage, are spaced far enough apart to allow seeing through to the action but are close enough to stop pucks and sticks from getting through to injure the face.

Some manufacturers now offer the best of both designs—a plastic face shield to protect the eyes and upper part of the face, and a cage to cover the lower jaw and to add ventilation. Full facial protection is mandatory in many amateur leagues and in North America, full face cages, full shields, or shield & cage combination are mandatory in high school hockey, college hockey, and for all players under the age of 18.