Hisham's Palace is the archaeological remains of an Umayyad
Umayyad
The Umayyad Caliphate was the second of the four major Arab caliphates established after the death of Muhammad. It was ruled by the Umayyad dynasty, whose name derives from Umayya ibn Abd Shams, the great-grandfather of the first Umayyad caliph. Although the Umayyad family originally came from the...
winter palace located five km north of Jericho
Jericho
Jericho ; is a city located near the Jordan River in the West Bank of the Palestinian territories. It is the capital of the Jericho Governorate and has a population of more than 20,000. Situated well below sea level on an east-west route north of the Dead Sea, Jericho is the lowest permanently...
in the West Bank
West Bank
The West Bank ) of the Jordan River is the landlocked geographical eastern part of the Palestinian territories located in Western Asia. To the west, north, and south, the West Bank shares borders with the state of Israel. To the east, across the Jordan River, lies the Hashemite Kingdom of Jordan...
. 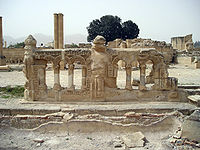 The complex comprised a palace, a paved courtyard, a bath house, a mosque
Mosque
A mosque is a place of worship for followers of Islam. The word is likely to have entered the English language through French , from Portuguese , from Spanish , and from Berber , ultimately originating in — . The Arabic word masjid literally means a place of prostration...
, a fountain courtyard, a 60-hectare
Hectare
The hectare is a metric unit of area defined as 10,000 square metres , and primarily used in the measurement of land. In 1795, when the metric system was introduced, the are was defined as being 100 square metres and the hectare was thus 100 ares or 1/100 km2...
enclosure containing plants, animals, mosaic and decoration of the highest standard. The palace itself was a large square building with a monumental entrance and rooms on two floors around a long portico
Portico
A portico is a porch leading to the entrance of a building, or extended as a colonnade, with a roof structure over a walkway, supported by columns or enclosed by walls...
ed courtyard.

A sophisticated system of underground pipes was constructed to provide hot water and portions of the system still exist. The bath house also served as an audience room and banqueting hall. The architecture of the bath's main hall and fountain contain many examples of late antique and classical secular building techniques not known elsewhere.

Recent excavations have uncovered workshops and storerooms, which may indicate that the palace was also an Umayyad town.

In the top right corner of the Bath is a small room that was reserved for the Prince. In this room a luscious mysterious mosaic panel stood. The main panel depicts a large tree and underneath it a lion attacking a deer (right side) and two deer peacefully grazing (left side). The panel's interpretations have varied, with some claiming that the panel probably represents good and bad governance, while others wrote extensively to explain that the Lion represents the prince and the deer his wives or harem. The latter back their claim with the argument that the deer seem peaceful and un-intimidated by the lion's presence. Thousands of fragments of the mosaics are stored in the Rockefeller Museum
Rockefeller Museum
The Rockefeller Museum, formerly the Palestine Archaeological Museum, is an archaeological museum located in East Jerusalem that houses a large collection of artifacts unearthed in the excavations conducted in Ottoman Palestine beginning in the late 19th century.The museum is under the management...
in East Jerusalem
East Jerusalem
East Jerusalem or Eastern Jerusalem refer to the parts of Jerusalem captured and annexed by Jordan in the 1948 Arab-Israeli War and then captured and annexed by Israel in the 1967 Six-Day War...
, but few were able to study them.

The stucco features depictions of semi-naked women and is unique in Islamic art
Islamic art
Islamic art encompasses the visual arts produced from the 7th century onwards by people who lived within the territory that was inhabited by or ruled by culturally Islamic populations...
.

Many of the details of the palace are known to historians as a result of the excavation and reconstruction of its layout by Robert Hamilton.

The luxurious decoration throughout the palace surpasses that known in late Roman equivalents, something that is often taken as evidence of the irreligious nature of the Umayyads.

The palace was destroyed in 747 by an earthquake.

According to Global Heritage Fund
Global Heritage Fund
Global Heritage Fund is a non-profit organization that operates internationally. Its mission statement says that it exists to protect and preserve significant and endangered cultural heritage sites in the developing world, through scientific excellence and community development...
(GHF), the rapid urban development of Jericho, as well as expansion of agricultural activity in the area, are seriously threatening archaeologists’ access to the palace’s disappearing ruins, much of which remain unexplored. GHF also cites insufficient management as a major threat, explaining that the remains of the palace, including an extensive water management network, have been greatly damaged by both natural causes and invasive development. Important structures such as walls and bridges have also been left to collapse.