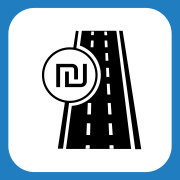 Highway 6 widely known as the Trans-Israel Highway or Cross-Israel Highway , is a major electronic toll highway
Highway
A highway is any public road. In American English, the term is common and almost always designates major roads. In British English, the term designates any road open to the public. Any interconnected set of highways can be variously referred to as a "highway system", a "highway network", or a...
in Israel
Israel
The State of Israel is a parliamentary republic located in the Middle East, along the eastern shore of the Mediterranean Sea...
. The highway was officially dedicated as the Yitzhak Rabin Highway , though this name is not commonly used. It started operating in the early 2000s and is being lengthened as construction proceeds on newer sections. As of 2009, parts of it are still under construction and the northern terminus was extended to the Ein Tut Interchange on July 20, 2009 where the highway now merges into Highway 70
Highway 70 (Israel)
Highway 70 is a highway in the coastal plain and Western Galilee in northern Israel. It connects the region of Zikhron Ya'akov to the Lower Galilee and to Kiryat Ata and Shlomi near Israel's border with Lebanon.-Description of the route:...
heading northwards.

The aim of the Highway is to provide an efficient north-south transportation corridor in the country while allowing drivers to bypass the traffic-congested Tel Aviv region
Gush Dan
The Tel Aviv Metropolitan Area , or Gush Dan , is a metropolitan area including areas from both the Tel Aviv and the Central Districts of Israel. The area is closely linked to the city of Tel Aviv through social, economic, and cultural ties. It is located along the Israeli Mediterranean coastline...
, located in the center of the country. Thus it is the Eastern-most major highway in Israel, in some places located almost right on the Green Line
Green Line (Israel)
Green Line refers to the demarcation lines set out in the 1949 Armistice Agreements between Israel and its neighbours after the 1948 Arab-Israeli War...
. Currently Highway 6 is 140 km long, all of which is a freeway. This figure will grow in the next few years as additional segments, currently undergoing statutory approvals and permitting processes, are extended from the existing section of the road.

Highway 6 is the first Israeli BOT
Build-Operate-Transfer
Build-own-operate-transfer or build-operate-transfer is a form of project financing, wherein a private entity receives a concession from the private or public sector to finance, design, construct, and operate a facility stated in the concession contract...
road constructed, carried out mainly by the private sector in return for a license to collect tolls on the highway for a given number of years. It is also one of the largest infrastructure projects undertaken in Israel in recent years.

Highway 6 uses a system of cameras and transponder
Transponder
In telecommunication, the term transponder has the following meanings:...
s to toll vehicles automatically. There are no toll booths, allowing Highway 6 to be designed as a normal freeway with interchanges. A radio antenna detects when a vehicle with a transponder has entered and exited the highway, calculating the toll rate. For vehicles without a transponder, an automatic license plate recognition system is used. Monthly statements are mailed to users. Highway 6 is based on the technology of the Highway 407 in Ontario
Ontario
Ontario is a province of Canada, located in east-central Canada. It is Canada's most populous province and second largest in total area. It is home to the nation's most populous city, Toronto, and the nation's capital, Ottawa....
, Canada
Canada
Canada is a North American country consisting of ten provinces and three territories. Located in the northern part of the continent, it extends from the Atlantic Ocean in the east to the Pacific Ocean in the west, and northward into the Arctic Ocean...
.

The pricing scheme for Highway 6 is based on the number of segments a driver passes in a given trip. Each segment is the road span between two interchange
Interchange (road)
In the field of road transport, an interchange is a road junction that typically uses grade separation, and one or more ramps, to permit traffic on at least one highway to pass through the junction without directly crossing any other traffic stream. It differs from a standard intersection, at which...
s (with one particular interchange being an exception). As of April 2010, the pricing for up to 3 segments is 17.79 NIS
Israeli new sheqel
The Israeli New Shekel is the currency of the State of Israel. The shekel is divided into 100 agorot...
, 21.39 for 4 segments, and 24.99 for 5 or more segments. Additional fee is paid when driving through the "northern" segment, the cost of which is additional 4.67. Pricing for motorcycles and heavy vehicles such as trucks is different.

The price above is for drivers who register with Highway 6's operator and install the in-vehicle transponder unit (called a "Passkal", pronounced with emphasis on the "kal", lit. "easy-pass") to record their highway usage. When a vehicle does not have a transponder, its license plate is scanned
Video tolling
Video tolling is a technique for toll collection using video or still images of a vehicle's license plate to identify the vehicle for payment.- Technology :...
and the vehicle identified. Drivers who pre-register their license plate with the Highway 6's operator and establish a direct billing relationship receive a discounted rate (though they pay more than those who have installed a "Passkal"). If a license plate is not located in Highway 6's database then the bill is sent to the owner of the vehicle according to the car registration with the Israeli Ministry of Transportation. Such a vehicle pays the highest rate, 40-80% higher than "Passkal" rates.

The licensed road operator, Derech Eretz, operates a fleet of service vehicles that patrol the entire length of the highway and assist drivers in need. Since it is technically a private road, the road operator is required to pay the police for traffic enforcement.

The highway's kilometer count starts at 66, since it includes the planned southern extensions.