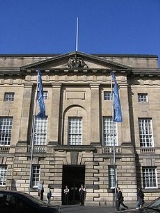 Encyclopedia
The High Court of Justiciary is the supreme criminal court
Criminal justice
Criminal Justice is the system of practices and institutions of governments directed at upholding social control, deterring and mitigating crime, or sanctioning those who violate laws with criminal penalties and rehabilitation efforts...
of Scotland
Scotland
Scotland is a country that is part of the United Kingdom. Occupying the northern third of the island of Great Britain, it shares a border with England to the south and is bounded by the North Sea to the east, the Atlantic Ocean to the north and west, and the North Channel and Irish Sea to the...
.

The individuals who sit in the High Court often hold a seat simultaneously in Scotland's civil court system.

When sitting as a court of first instance, that is, when hearing a case for the first time rather than on appeal, a single Lord Commissioner of Justiciary usually presides (although two or more judges may sit in important or difficult cases) with a jury of fifteen individuals. Under the Scottish legal system, the jury need not return a unanimous verdict; a majority verdict may also be used. The Scottish legal system also permits a verdict of 'not proven
Not proven
Not proven is a verdict available to a court in Scotland.Under Scots law, a criminal trial may end in one of three verdicts: one of conviction and two of acquittal ....
' as well as verdicts of 'guilty' or 'not guilty'.

There is no further appeal from the High Court's decision on appeal (that can be made to or heard by the High Court). Appellants who still wish to pursue their appeal may petition the Scottish Criminal Cases Review Commission, who have the authority to refer an appeal back to the High Court, if they determine that a miscarriage of justice has occurred. Appellants are also entitled to lay their appeals before the UK Supreme Court and the European Court.

The High Court was founded in 1672, but its origins derive from the College of Justice
College of Justice
The College of Justice is a term used to describe the Supreme Courts of Scotland, and its associated bodies.The constituent bodies of the supreme courts of Scotland are the Court of Session, the High Court of Justiciary, and the Accountant of Court's Office...
, as well as from the medieval royal court
Noble court
The court of a monarch, or at some periods an important nobleman, is a term for the extended household and all those who regularly attended on the ruler or central figure...
s. The medieval Justiciar
Justiciar
In medieval England and Ireland the Chief Justiciar was roughly equivalent to a modern Prime Minister as the monarch's chief minister. Similar positions existed on the Continent, particularly in Norman Italy. The term is the English form of the medieval Latin justiciarius or justitiarius In...
(royal judge) took its name from the justices who originally travelled around Scotland hearing cases on circuit or 'ayre'. From 1524, the Justiciar or a deputy was required to have a "permanent base" in Edinburgh, and as such the College of Justice was established in Edinburgh in 1532.