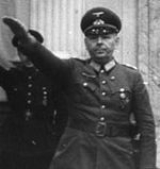 Encyclopedia
Hermann Reinecke was a General der Infanterie
General of the Artillery (Germany)
General of the artillery may mean:#a rank of general in the Imperial Army, Reichswehr or Wehrmacht - the second-highest regular rank below Generaloberst. Cavalry officers of equivalent rank were called general of the cavalry, and infantry officers of equivalent rank general of the infantry...
of Nazi Germany
Nazi Germany
Nazi Germany , also known as the Third Reich , but officially called German Reich from 1933 to 1943 and Greater German Reich from 26 June 1943 onward, is the name commonly used to refer to the state of Germany from 1933 to 1945, when it was a totalitarian dictatorship ruled by...
's Wehrmacht
Wehrmacht
The Wehrmacht – from , to defend and , the might/power) were the unified armed forces of Nazi Germany from 1935 to 1945. It consisted of the Heer , the Kriegsmarine and the Luftwaffe .-Origin and use of the term:...
during World War II
World War II
World War II, or the Second World War , was a global conflict lasting from 1939 to 1945, involving most of the world's nations—including all of the great powers—eventually forming two opposing military alliances: the Allies and the Axis...
.

He was a former Lieutenant General and the head of the General Office of the Armed Forces at OKW
Oberkommando der Wehrmacht
The Oberkommando der Wehrmacht was part of the command structure of the armed forces of Nazi Germany during World War II.- Genesis :...
(Allgemeines Wehrmachtamt, AWA). Reinecke was also head of the office for the NSFO (Nationalsozialistische Führungsoffiziere), which consisted of Nazi officers charged with political propaganda in the Wehrmacht. Major Karl August Meinel, 1 August 1942, was shifted into the Führerreserve
Führerreserve
The Führerreserve was a section set up in 1939 in many army units, in which high officers waited for a new assignment. Also, troublesome officers were sometimes shifted into the Führerreserve, since the High Command believed that they would be less dangerous there...
, because on 13 January 1942 he wrote a critical report to Hermann Reinecke on the segregation and execution of Russian prisoners of war in prison camp Stalag VII A by the Gestapo and the Sicherheitsdienst SD (security service) of the Reichsführer SS (Heinrich Himmler
Heinrich Himmler
Heinrich Luitpold Himmler was Reichsführer of the SS, a military commander, and a leading member of the Nazi Party. As Chief of the German Police and the Minister of the Interior from 1943, Himmler oversaw all internal and external police and security forces, including the Gestapo...
)

In the High Command Trial
High Command Trial
The High Command Trial was the last of the twelve trials for war crimes the U.S. authorities held in their occupation zone in Germany in Nuremberg after the end of World War II. These twelve trials were all held before U.S...
at the Nuremberg Trials
Nuremberg Trials
The Nuremberg Trials were a series of military tribunals, held by the victorious Allied forces of World War II, most notable for the prosecution of prominent members of the political, military, and economic leadership of the defeated Nazi Germany....
after World War II, Reinecke was convicted of war crimes and crimes against humanity and sentenced to life imprisonment. He was released, however, in October 1954.
The source of this article is wikipedia, the free encyclopedia.  The text of this article is licensed under the GFDL.