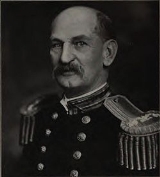 Mayo was born in Burlington, Vermont
Burlington, Vermont
Burlington is the largest city in the U.S. state of Vermont and the shire town of Chittenden County. Burlington lies south of the U.S.-Canadian border and some south of Montreal....
, 8 December 1856. Upon graduation from the United States Naval Academy
United States Naval Academy
The United States Naval Academy is a four-year coeducational federal service academy located in Annapolis, Maryland, United States...
in 1876 he experienced a variety of naval duties including coastal survey. During the Spanish-American War
Spanish-American War
The Spanish–American War was a conflict in 1898 between Spain and the United States, effectively the result of American intervention in the ongoing Cuban War of Independence...
he served in the gunboat
Gunboat
A gunboat is a naval watercraft designed for the express purpose of carrying one or more guns to bombard coastal targets, as opposed to those military craft designed for naval warfare, or for ferrying troops or supplies.-History:...
Bennington
USS Bennington (PG-4)
USS Bennington was a member of the of steel-hulled, twin-screw gunboats in the United States Navy in the late 19th and early 20th centuries. She was the first U.S. Navy ship named in honor of the town of Bennington, Vermont, site of the Battle of Bennington in the American Revolutionary War.The...
(PG-4) off the west coast of North America
North America
North America is a continent wholly within the Northern Hemisphere and almost wholly within the Western Hemisphere. It is also considered a northern subcontinent of the Americas...
. Appointed rear admiral
Rear admiral (United States)
Rear admiral is a naval commissioned officer rank above that of a commodore and captain, and below that of a vice admiral. The uniformed services of the United States are unique in having two grades of rear admirals.- Rear admiral :...
in 1913, he commanded the naval squadron involved in the Tampico incident of 9 April 1914. His demands for vindication of national honor further accentuated the tense relations with Mexico
Mexico
The United Mexican States , commonly known as Mexico , is a federal constitutional republic in North America. It is bordered on the north by the United States; on the south and west by the Pacific Ocean; on the southeast by Guatemala, Belize, and the Caribbean Sea; and on the east by the Gulf of...
.

In 1940, the destroyer
Destroyer
In naval terminology, a destroyer is a fast and maneuverable yet long-endurance warship intended to escort larger vessels in a fleet, convoy or battle group and defend them against smaller, powerful, short-range attackers. Destroyers, originally called torpedo-boat destroyers in 1892, evolved from...
USS Mayo
USS Mayo (DD-422)
USS Mayo was a Benson-class destroyer in the United States Navy during World War II. She was named for Admiral Henry Thomas Mayo....
(DD-422) was named in his honor.
The source of this article is wikipedia, the free encyclopedia.  The text of this article is licensed under the GFDL.