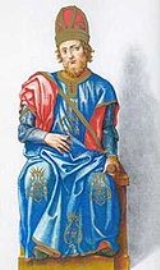 Encyclopedia
Henry IV (5 January 1425 – 11 December 1474), King of the Crown of Castile
Crown of Castile
The Crown of Castile was a medieval and modern state in the Iberian Peninsula that formed in 1230 as a result of the third and definitive union of the crowns and parliaments of the kingdoms of Castile and León upon the accession of the then King Ferdinand III of Castile to the vacant Leonese throne...
, nicknamed the Impotent (ruled 1454-1474), was the last of the weak late medieval kings of Castile. During Henry's reign the nobles increased in power and the nation became less centralised.

In 1440, at the age of fifteen, he was married to Blanche II of Navarre
Blanche II of Navarre
Blanche II of Navarre , titular queen of Navarre, was the daughter of John II of Aragon and Blanche I of Navarre. She was also Princess of Asturias by marriage....
. The marriage was never consummated. In 1453, after thirteen years, Henry sought a divorce. An official examination confirmed the virginity of Blanche, and a priest questioned the prostitutes of Segovia
Segovia
Segovia is a city in Spain, the capital of Segovia Province in the autonomous community of Castile and León. It is situated north of Madrid, 30 minutes by high speed train. The municipality counts some 55,500 inhabitants.-Etymology:...
, who confirmed that Henry was sexually capable. Blanche was sent home; eight years later, she became de iure Queen of Navarre and died under strange circumstances.

In 1455, Henry married Joan of Portugal
Joan of Portugal
Joan of Portugal was Queen consort of Castile as the second wife of King Henry IV of Castile and a Portuguese infanta, the posthumous daughter of King Edward of Portugal and his wife Eleanor of Aragon...
, sister of Afonso V of Portugal
Afonso V of Portugal
Afonso V KG , called the African , was the twelfth King of Portugal and the Algarves. His sobriquet refers to his conquests in Northern Africa.-Early life:...
. After six years of marriage, in 1462, she gave birth to a daughter, Joan, nicknamed "La Beltraneja". Six years after the birth of the throne's heir, part of the nobility of Castile revolted against the king. The rebels claimed that the princess was not the daughter of the king, but actually the daughter of Beltrán de La Cueva
Beltrán de la Cueva
Beltrán de la Cueva y Alfonso de Mercado, 1st Duke of Alburquerque was a Spanish nobleman and presumed lover of Queen Joan of Portugal.-Early life:...
, 1st Duke of Alburquerque
Alburquerque, Badajoz
Alburquerque is a town in the province of Badajoz in Spain. It has 5,600 inhabitants. It is very close to the border with Portugal and was an ancient dominion of the kings of this country...
. This hypothesis was reinforced when the Queen had another two children with the nephew of a Bishop. Though many contemporary historians and chroniclers assumed Henry was impotent, the royal chronicles of his reign were all written or revised during the reign and under the influence of Isabella, whose strong interest in proving Joan illegitimate renders these accounts at least partially suspect. The question of Joan's paternity is therefore not firmly answerable, given the lack of available reliable sources.

The doubt of her legitimacy as an heir, the weakness of the king, the adultery of the queen, and the unruliness of the nobility all set the stage for a struggle for succession after Henry's death. Henry divorced his wife after her scandalous behavior with Bishop Fonseca's nephew. After a long period of conflict between the rival factions, Henry finally agreed to name Isabella his successor, in Guisando
Guisando, Spain
Guisando is a municipality located in the province of Ávila, Castile and León, Spain. According to the 2006 census , the municipality has a population of 620 inhabitants....
(Avila
Ávila (province)
Ávila is a province of central-western Spain, in the southern part of the autonomous community of Castile and León. It is bordered on the south by the provinces of Toledo and Cáceres, on the west by Salamanca, on the north by Valladolid, and on the east by Segovia and Madrid. Ávila has a...
), provided she allow him to arrange her strategic marriage. Isabella would go on to break this stipulation of the agreement.

After the death of the king war started in Castile. Joanna was supported by Portugal
Portugal
Portugal , officially the Portuguese Republic is a country situated in southwestern Europe on the Iberian Peninsula. Portugal is the westernmost country of Europe, and is bordered by the Atlantic Ocean to the West and South and by Spain to the North and East. The Atlantic archipelagos of the...
, while the eventual winner, his half-sister Isabella I of Castile
Isabella I of Castile
Isabella I was Queen of Castile and León. She and her husband Ferdinand II of Aragon brought stability to both kingdoms that became the basis for the unification of Spain. Later the two laid the foundations for the political unification of Spain under their grandson, Charles V, Holy Roman Emperor...
had the support of Aragon
Kingdom of Aragon
The Kingdom of Aragon was a medieval and early modern kingdom in the Iberian Peninsula, corresponding to the modern-day autonomous community of Aragon, in Spain...
via her husband Ferdinand
Ferdinand II of Aragon
Ferdinand the Catholic was King of Aragon , Sicily , Naples , Valencia, Sardinia, and Navarre, Count of Barcelona, jure uxoris King of Castile and then regent of that country also from 1508 to his death, in the name of...
and, later in the war, France
France
The French Republic , The French Republic , The French Republic , (commonly known as France , is a unitary semi-presidential republic in Western Europe with several overseas territories and islands located on other continents and in the Indian, Pacific, and Atlantic oceans. Metropolitan France...
.

Henry was of a very fair complexion, had blue eyes, and had a hair color
Hair color
Hair color is the pigmentation of hair follicles due to two types of melanin: eumelanin and pheomelanin. Generally, if more melanin is present, the color of the hair is darker; if less melanin is present, the hair is lighter...
that was between reddish
Red hair
Red hair occurs on approximately 1–2% of the human population. It occurs more frequently in people of northern or western European ancestry, and less frequently in other populations...
-blond
Blond
Blond or blonde or fair-hair is a hair color characterized by low levels of the dark pigment eumelanin. The resultant visible hue depends on various factors, but always has some sort of yellowish color...
e and auburn; these were typical in members of the Trastámara
Trastámara
The House of Trastámara was a dynasty of kings in the Iberian Peninsula, which first governed in Castile beginning in 1369 before expanding its rule into Aragón, Navarre and Naples.They were a cadet illegitimate line of the House of Burgundy....
family who were descendants of Henry II of Castile and of the Castilian House of Burgundy
Anscarids
The Anscarids or Anscarii or the House of Ivrea were a medieval Frankish dynasty of Burgundian origin which rose to prominence in Italy in the tenth century, even briefly holding the Italian throne. They also ruled the County of Burgundy in the eleventh and twelfth centuries and it was one of their...
since Queen Leonor
Leonora of England
Eleanor of England was Queen of Castile and Toledo as wife of Alfonso VIII of Castile. She was a daughter of Henry II of England and his wife, Duchess Eleanor of Aquitaine.-Early life:...
.