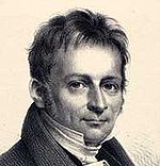 Encyclopedia
Henrik Steffens was a Norwegian
Norway
Norway , officially the Kingdom of Norway, is a Nordic unitary constitutional monarchy whose territory comprises the western portion of the Scandinavian Peninsula, Jan Mayen, and the Arctic archipelago of Svalbard and Bouvet Island. Norway has a total area of and a population of about 4.9 million...
-born Danish philosopher
Philosophy
Philosophy is the study of general and fundamental problems, such as those connected with existence, knowledge, values, reason, mind, and language. Philosophy is distinguished from other ways of addressing such problems by its critical, generally systematic approach and its reliance on rational...
, scientist
Science
Science is a systematic enterprise that builds and organizes knowledge in the form of testable explanations and predictions about the universe...
, and poet
Poetry
Poetry is a form of literary art in which language is used for its aesthetic and evocative qualities in addition to, or in lieu of, its apparent meaning...
.

He was born at Stavanger, Norway. At the age of fourteen he went with his parents to Copenhagen
Copenhagen
Copenhagen is the capital and largest city of Denmark, with an urban population of 1,199,224 and a metropolitan population of 1,930,260 . With the completion of the transnational Øresund Bridge in 2000, Copenhagen has become the centre of the increasingly integrating Øresund Region...
, where he studied theology
Theology
Theology is the systematic and rational study of religion and its influences and of the nature of religious truths, or the learned profession acquired by completing specialized training in religious studies, usually at a university or school of divinity or seminary.-Definition:Augustine of Hippo...
and natural science
Natural science
The natural sciences are branches of science that seek to elucidate the rules that govern the natural world by using empirical and scientific methods...
. In 1796 he lectured at the University of Kiel
University of Kiel
The University of Kiel is a university in the city of Kiel, Germany. It was founded in 1665 as the Academia Holsatorum Chiloniensis by Christian Albert, Duke of Holstein-Gottorp and has approximately 23,000 students today...
, and a year later went to the University of Jena to study the natural philosophy of Friedrich Schelling. He went to Freiburg
University of Freiburg
The University of Freiburg , sometimes referred to in English as the Albert Ludwig University of Freiburg, is a public research university located in Freiburg im Breisgau, Baden-Württemberg, Germany.The university was founded in 1457 by the Habsburg dynasty as the...
in 1800, and there came under the influence of Friedrich Werner
Friedrich Ludwig Zacharias Werner
Friedrich Ludwig Zacharias Werner was a German poet, dramatist, and preacher. As a dramatist, he is known mainly for inaugurating the era of the so-called “tragedies of fate.”-Biography:...
.

After two years he returned to Copenhagen, and is said to have introduced German romanticism
German Romanticism
For the general context, see Romanticism.In the philosophy, art, and culture of German-speaking countries, German Romanticism was the dominant movement of the late 18th and early 19th centuries. German Romanticism developed relatively late compared to its English counterpart, coinciding in its...
to Denmark in 1802 with nine lectures given at Elers Kollegium
Elers Kollegium
Elers' Kollegium is located in the medieval part of Copenhagen. The dormitory or society provides living quarters for 20 students from the University of Copenhagen or from the Technical University of Denmark. The dormitory is one of five small dormitories referred to as the old dormitories...
, later published as Indledning til philosophiske Forelæsninger (Introduction to Philosophical Lectures). These lectures were a great success and a source of inspiration in Danish romanticism
Romanticism
Romanticism was an artistic, literary and intellectual movement that originated in the second half of the 18th century in Europe, and gained strength in reaction to the Industrial Revolution...
. They were attended by many who later became leading Danish thinkers, such as Oehlenschläger
Adam Gottlob Oehlenschläger
Adam Gottlob Oehlenschläger was a Danish poet and playwright. He introduced romanticism into Danish literature.-Biography:He was born in Vesterbro, then a suburb of Copenhagen, on 14 November 1779...
and Grundtvig. Friedrich Schleiermacher was so much struck by their excellence that he endeavoured, unsuccessfully, to obtain for Steffens a chair in the new Berlin University in 1804, in order that his own ethical teachings should be supported in the scientific department.

Despite – or perhaps because of – the deep impact made by his lectures, Steffens was not made welcome by the Danish authorities. He moved back to Germany and took up a professorship at the University of Halle in 1804, to return to Denmark only occasionally. During the Battle of Leipzig
Battle of Leipzig
The Battle of Leipzig or Battle of the Nations, on 16–19 October 1813, was fought by the coalition armies of Russia, Prussia, Austria and Sweden against the French army of Napoleon. Napoleon's army also contained Polish and Italian troops as well as Germans from the Confederation of the Rhine...
(1813) he enlisted in the Prussian Army
Royal Prussian Army of the Napoleonic Wars
The Royal Prussian Army was the principal armed force of the Kingdom of Prussia during its participation in the Napoleonic Wars.Frederick the Great's successor, his nephew Frederick William II , relaxed conditions in Prussia and had little interest in war...
as a second lieutenant
Second Lieutenant
Second lieutenant is a junior commissioned officer military rank in many armed forces.- United Kingdom and Commonwealth :The rank second lieutenant was introduced throughout the British Army in 1871 to replace the rank of ensign , although it had long been used in the Royal Artillery, Royal...
, and he was present at the capture of Paris
Battle of Paris (1814)
The Battle of Paris was fought during the Napoleonic Wars in 1814. The French defeat led directly to the abdication of Napoleon I.-Background:...
the following year. He was professor of physics at Breslau from 1811 until 1832, when he accepted an invitation to Berlin
Berlin
Berlin is the capital city of Germany and is one of the 16 states of Germany. With a population of 3.45 million people, Berlin is Germany's largest city. It is the second most populous city proper and the seventh most populous urban area in the European Union...
.

Steffens was one of the so-called "Philosophers of Nature", a friend and adherent of Schelling and of Schleiermacher. More than either of these two thinkers he was acquainted with the discoveries of modern science, and was thus able to correct or modify the highly imaginative speculations of Schelling. He held that, throughout the scheme of nature and intellectual life, the main principle is Individualisation. As organisms rise higher in the scale of development, the sharper and more distinct become their outlines, the more definite their individualities. This principle he endeavoured to deduce from his knowledge of geology
Geology
Geology is the science comprising the study of solid Earth, the rocks of which it is composed, and the processes by which it evolves. Geology gives insight into the history of the Earth, as it provides the primary evidence for plate tectonics, the evolutionary history of life, and past climates...
, in contrast to Lorenz Oken
Lorenz Oken
Lorenz Oken was a German naturalist.Oken was born Lorenz Okenfuss in Bohlsbach in Baden and studied natural history and medicine at the universities of Freiburg and Würzburg. He went on to the University of Göttingen, where he became a Privatdozent , and shortened his name to Oken...
, who developed the same theory on biological grounds. His influence was considerable, and both Schelling and Schleiermacher modified their theories in deference to his scientific deductions.

His chief scientific and philosophical works are:

During the last five years of his life he wrote an autobiography, Was ich erlebte, and after his death his Nachgelassene Schriften (1846) was published. See Tietzen, Zur Erinnerung an Steffens; Petersen, Henrik Steffens (German translation, 1884); Dilthey, Leben Schleiermachers.