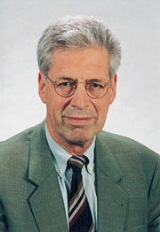 Henning Scherf is a German
Germany
Germany , officially the Federal Republic of Germany , is a federal parliamentary republic in Europe. The country consists of 16 states while the capital and largest city is Berlin. Germany covers an area of 357,021 km2 and has a largely temperate seasonal climate...
lawyer
Lawyer
A lawyer, according to Black's Law Dictionary, is "a person learned in the law; as an attorney, counsel or solicitor; a person who is practicing law." Law is the system of rules of conduct established by the sovereign government of a society to correct wrongs, maintain the stability of political...
and politician
Politician
A politician, political leader, or political figure is an individual who is involved in influencing public policy and decision making...
. He was the Mayor of Bremen
Bremen (state)
The Free Hanseatic City of Bremen is the smallest of Germany's 16 states. A more informal name, but used in some official contexts, is Land Bremen .-Geography:...
and President of the Senate of Bremen
Senate of Bremen
The Senate of the Free Hanseatic City of Bremen is the government of the city-state of Bremen . The senate has existed since mediæval times. The senate is headed by a President, who also holds the title of Mayor. The President's deputy also holds the title Mayor...
from 4 July 1995 to 8 November 2005.

After studying law and social sciences from 1958 - 1962 in Berlin
Berlin
Berlin is the capital city of Germany and is one of the 16 states of Germany. With a population of 3.45 million people, Berlin is Germany's largest city. It is the second most populous city proper and the seventh most populous urban area in the European Union...
, Hamburg
Hamburg
-History:The first historic name for the city was, according to Claudius Ptolemy's reports, Treva.But the city takes its modern name, Hamburg, from the first permanent building on the site, a castle whose construction was ordered by the Emperor Charlemagne in AD 808...
and Freiburg
Freiburg
Freiburg im Breisgau is a city in Baden-Württemberg, Germany. In the extreme south-west of the country, it straddles the Dreisam river, at the foot of the Schlossberg. Historically, the city has acted as the hub of the Breisgau region on the western edge of the Black Forest in the Upper Rhine Plain...
he worked for a Protestant students association (Evangelisches Studentenwerk) until 1964. He has been a member of the Social Democratic Party of Germany
Social Democratic Party of Germany
The Social Democratic Party of Germany is a social-democratic political party in Germany...
since 1963. In 1968 Scherf received his law doctorate from University of Hamburg
University of Hamburg
The University of Hamburg is a university in Hamburg, Germany. It was founded on 28 March 1919 by Wilhelm Stern and others. It grew out of the previous Allgemeines Vorlesungswesen and the Kolonialinstitut as well as the Akademisches Gymnasium. There are around 38,000 students as of the start of...
.

Scherf went into politics after practicing as a lawyer
Lawyer
A lawyer, according to Black's Law Dictionary, is "a person learned in the law; as an attorney, counsel or solicitor; a person who is practicing law." Law is the system of rules of conduct established by the sovereign government of a society to correct wrongs, maintain the stability of political...
in Bremen, and was elected to the Bremer Bürgerschaft (parliament
Parliament
A parliament is a legislature, especially in those countries whose system of government is based on the Westminster system modeled after that of the United Kingdom. The name is derived from the French , the action of parler : a parlement is a discussion. The term came to mean a meeting at which...
) in 1971. From 1978 until 2005 he was a member of Bremen Senate (government) in various functions, including Senator for Finances, Senator for Youth and Social Issues, Senator for Health and Sport, Mayor, Senator for Education and Sciences and Senator of Law and Constitution. In 1995 Scherf was elected "Präsident des Senats" (President of the Senate, head of state).

He was also the head of the "Vermittlungsausschuss" (negotiations-committee) which resolves conflicts concerning legislation between "Bundesrat" and "Bundestag
Bundestag
The Bundestag is a federal legislative body in Germany. In practice Germany is governed by a bicameral legislature, of which the Bundestag serves as the lower house and the Bundesrat the upper house. The Bundestag is established by the German Basic Law of 1949, as the successor to the earlier...
", the two houses of the German parliament at the federal
Federal republic
A federal republic is a federation of states with a republican form of government. A federation is the central government. The states in a federation also maintain the federation...
level.

Scherf has been re-elected twice due to his popularity in Bremen. He is well known for his warm and friendly character despite his looks (he is 2 m tall). His diplomatic skills, especially in forging compromises and running negotiations, are considered legendary, not only by members of his own party.

He is well known for going to work by bicycle and refusing to accept a car and a driver provided by the city. He also has the habit of only drinking warm water with his meals.
The source of this article is wikipedia, the free encyclopedia.  The text of this article is licensed under the GFDL.