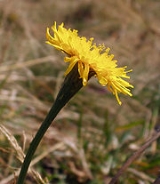 Encyclopedia
Hawkbits are dandelion-like flower
Flower
A flower, sometimes known as a bloom or blossom, is the reproductive structure found in flowering plants . The biological function of a flower is to effect reproduction, usually by providing a mechanism for the union of sperm with eggs...
s in the family Asteraceae
Asteraceae
The Asteraceae or Compositae , is an exceedingly large and widespread family of vascular plants. The group has more than 22,750 currently accepted species, spread across 1620 genera and 12 subfamilies...
(Compositae). Their English
English language
English is a West Germanic language that arose in the Anglo-Saxon kingdoms of England and spread into what was to become south-east Scotland under the influence of the Anglian medieval kingdom of Northumbria...
name derives from the mediæval
Middle Ages
The Middle Ages is a periodization of European history from the 5th century to the 15th century. The Middle Ages follows the fall of the Western Roman Empire in 476 and precedes the Early Modern Era. It is the middle period of a three-period division of Western history: Classic, Medieval and Modern...
belief that hawk
Hawk
The term hawk can be used in several ways:* In strict usage in Australia and Africa, to mean any of the species in the subfamily Accipitrinae, which comprises the genera Accipiter, Micronisus, Melierax, Urotriorchis and Megatriorchis. The large and widespread Accipiter genus includes goshawks,...
s ate the plant to improve their eyesight. Although originally native to Eurasia
Eurasia
Eurasia is a continent or supercontinent comprising the traditional continents of Europe and Asia ; covering about 52,990,000 km2 or about 10.6% of the Earth's surface located primarily in the eastern and northern hemispheres...
and North Africa
North Africa
North Africa or Northern Africa is the northernmost region of the African continent, linked by the Sahara to Sub-Saharan Africa. Geopolitically, the United Nations definition of Northern Africa includes eight countries or territories; Algeria, Egypt, Libya, Morocco, South Sudan, Sudan, Tunisia, and...
, they have since become established in other countries, including the United States
United States
The United States of America is a federal constitutional republic comprising fifty states and a federal district...
and New Zealand
New Zealand
New Zealand is an island country in the south-western Pacific Ocean comprising two main landmasses and numerous smaller islands. The country is situated some east of Australia across the Tasman Sea, and roughly south of the Pacific island nations of New Caledonia, Fiji, and Tonga...
.

Recent research has shown the genus Leontodon to be polyphyletic
Polyphyly
A polyphyletic group is one whose members' last common ancestor is not a member of the group.For example, the group consisting of warm-blooded animals is polyphyletic, because it contains both mammals and birds, but the most recent common ancestor of mammals and birds was cold-blooded...
. These results show it to consist of two monophyletic groups, however. The subgenus Leontodon subg. Leontodon is related to genera such as Picris
Picris
Picris is a genus in the family Asteraceae .Picris species are used as food plants by the larvae of some Lepidoptera species, such as the grass moth Diasemia reticularis. Schinia cardui feeds exclusively on P. hieracioides....
and Hypochaeris
Hypochaeris
Hypochaeris is a genus of plants in the family Asteraceae. Many species are known as cat's ear. These are annual and perennial herbs generally bearing flower heads with yellow ray florets....
. The subgenus Leontodon subg. Oporinia is not part of that group and may be raised to generic level
Genus
In biology, a genus is a low-level taxonomic rank used in the biological classification of living and fossil organisms, which is an example of definition by genus and differentia...
as the genus Scorzoneroides.

In Crete
Crete
Crete is the largest and most populous of the Greek islands, the fifth largest island in the Mediterranean Sea, and one of the thirteen administrative regions of Greece. It forms a significant part of the economy and cultural heritage of Greece while retaining its own local cultural traits...
, the species Leontodon tuberosus which is called (), () or () has its roots eaten raw and its leaves eaten steamed
Steaming
Steaming is a method of cooking using steam. Steaming is considered a healthy cooking technique and capable of cooking almost all kinds of food.-Method:...
.

The genus contains about 50 species, of which three have been naturalized in North America or New Zealand.