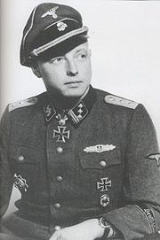 Encyclopedia
Hauptsturmführer was a Nazi rank
Ranks and insignia of the Schutzstaffel
The uniforms and insignia of the Schutzstaffel were paramilitary ranks and uniforms used by the SS between 1925 and 1945 to differentiate that organization from the regular German armed forces, the German state, and the Nazi Party....
of the SS
Schutzstaffel
The Schutzstaffel |Sig runes]]) was a major paramilitary organization under Adolf Hitler and the Nazi Party. Built upon the Nazi ideology, the SS under Heinrich Himmler's command was responsible for many of the crimes against humanity during World War II...
which was used between the years of 1934 and 1945. The rank of Hauptsturmführer was a mid-grade company level officer and was the equivalent of a Captain (Hauptmann
Hauptmann
Hauptmann is a German word usually translated as captain when it is used as an officer's rank in the German, Austrian and Swiss armies. While "haupt" in contemporary German means "main", it also has the dated meaning of "head", i.e...
) in the German Army (Heer
Heer
Heer is German for "army". Generally, its use as "army" is not restricted to any particular country, so "das britische Heer" would mean "the British army".However, more specifically it can refer to:*An army of Germany:...
) and also the equivalent of captain in foreign armies. Hauptsturmführer was the most commonly held SS officer rank during the Second World War.

The rank of Hauptsturmführer evolved from the much older rank of Sturmhauptführer
Sturmhauptführer
Sturmhauptführer was a Nazi Party paramilitary rank used by both the Sturmabteilung and the SS. It was the equivalent of a Hauptmann in the German Army. This is the equivalent of Captain in western militaries....
, created in 1928 as a rank of the Sturmabteilung
Sturmabteilung
The Sturmabteilung functioned as a paramilitary organization of the National Socialist German Workers' Party . It played a key role in Adolf Hitler's rise to power in the 1920s and 1930s...
. The SS used the rank of Sturmhauptführer from 1930 to 1934 at which time, following the Night of the Long Knives
Night of the Long Knives
The Night of the Long Knives , sometimes called "Operation Hummingbird " or in Germany the "Röhm-Putsch," was a purge that took place in Nazi Germany between June 30 and July 2, 1934, when the Nazi regime carried out a series of political murders...
, the name of the rank was changed to Hauptsturmführer although the insignia remained the same.

Some of the most infamous SS members are known to have held the rank of Hauptsturmführer. Among them are Josef Mengele
Josef Mengele
Josef Rudolf Mengele , also known as the Angel of Death was a German SS officer and a physician in the Nazi concentration camp Auschwitz-Birkenau. He earned doctorates in anthropology from Munich University and in medicine from Frankfurt University...
, the infamous doctor assigned to Auschwitz; Klaus Barbie
Klaus Barbie
Nikolaus 'Klaus' Barbie was an SS-Hauptsturmführer , Gestapo member and war criminal. He was known as the Butcher of Lyon.- Early life :...
, Gestapo Chief of Lyon
Lyon
Lyon , is a city in east-central France in the Rhône-Alpes region, situated between Paris and Marseille. Lyon is located at from Paris, from Marseille, from Geneva, from Turin, and from Barcelona. The residents of the city are called Lyonnais....
; Alois Brunner
Alois Brunner
Alois Brunner is an Austrian Nazi war criminal. Brunner was Adolf Eichmann's assistant, and Eichmann referred to Brunner as his "best man." As commander of the Drancy internment camp outside Paris from June 1943 to August 1944, Brunner is held responsible for sending some 140,000 European Jews to...
, Adolf Eichmann
Adolf Eichmann
Adolf Otto Eichmann was a German Nazi and SS-Obersturmbannführer and one of the major organizers of the Holocaust...
's assistant; and Amon Göth
Amon Göth
Amon Leopold Göth was an Austrian Nazi and the commandant of the Nazi concentration camp at Płaszów, General Government...
, who was sentenced to death and hanged for committing mass murder during the liquidations of the ghettos at Tarnow
Tarnów
Tarnów is a city in southeastern Poland with 115,341 inhabitants as of June 2009. The city has been situated in the Lesser Poland Voivodeship since 1999, but from 1975 to 1998 it was the capital of the Tarnów Voivodeship. It is a major rail junction, located on the strategic east-west connection...
and Krakow
Kraków
Kraków also Krakow, or Cracow , is the second largest and one of the oldest cities in Poland. Situated on the Vistula River in the Lesser Poland region, the city dates back to the 7th century. Kraków has traditionally been one of the leading centres of Polish academic, cultural, and artistic life...
, the camp at Szebnie
Szebnie
Szebnie is a village in the administrative district of Gmina Jasło, within Jasło County, Subcarpathian Voivodeship, in south-eastern Poland. It lies approximately east of Jasło and south-west of the regional capital Rzeszów.-References:...
and the Plaszow camp, portrayed in the film Schindler's List
Schindler's List
Schindler's List is a 1993 American film about Oskar Schindler, a German businessman who saved the lives of more than a thousand mostly Polish-Jewish refugees during the Holocaust by employing them in his factories. The film was directed by Steven Spielberg, and based on the novel Schindler's Ark...
.