A hatchery is a facility where egg
Egg (biology)
An egg is an organic vessel in which an embryo first begins to develop. In most birds, reptiles, insects, molluscs, fish, and monotremes, an egg is the zygote, resulting from fertilization of the ovum, which is expelled from the body and permitted to develop outside the body until the developing...
s are hatched under artificial conditions, especially those of fish
Fish
Fish are a paraphyletic group of organisms that consist of all gill-bearing aquatic vertebrate animals that lack limbs with digits. Included in this definition are the living hagfish, lampreys, and cartilaginous and bony fish, as well as various extinct related groups...
or poultry
Poultry
Poultry are domesticated birds kept by humans for the purpose of producing eggs, meat, and/or feathers. These most typically are members of the superorder Galloanserae , especially the order Galliformes and the family Anatidae , commonly known as "waterfowl"...
. It may be used for ex-situ conservation
Ex-situ conservation
Ex-situ conservation means literally, "off-site conservation". It is the process of protecting an endangered species of plant or animal outside of its natural habitat; for example, by removing part of the population from a threatened habitat and placing it in a new location, which may be a wild...
purposes, i.e. to breed rare
Rare species
A rare species is a group of organisms that are very uncommon or scarce. This designation may be applied to either a plant or animal taxon, and may be distinct from the term "endangered" or "threatened species" but not "extinct"....
or endangered species
Endangered species
An endangered species is a population of organisms which is at risk of becoming extinct because it is either few in numbers, or threatened by changing environmental or predation parameters...
under controlled conditions; alternatively, it may be for economic reasons (i.e. to enhance food supplies or fishery
Fishery
Generally, a fishery is an entity engaged in raising or harvesting fish which is determined by some authority to be a fishery. According to the FAO, a fishery is typically defined in terms of the "people involved, species or type of fish, area of water or seabed, method of fishing, class of boats,...
resources). 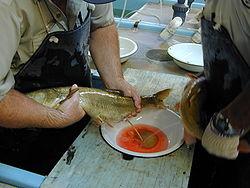 Fish hatcheries are used to cultivate and breed a large number of fish in an enclosed environment. Fish farms use hatcheries to cultivate fish to sell for food, or ornamental purposes, eliminating the need to find the fish in the wild and even providing some species outside of their natural season. They raise the fish until they are ready to be eaten or sold to aquarium stores. Other hatcheries release the juvenile fish into a river, lake or the ocean
Ocean
An ocean is a major body of saline water, and a principal component of the hydrosphere. Approximately 71% of the Earth's surface is covered by ocean, a continuous body of water that is customarily divided into several principal oceans and smaller seas.More than half of this area is over 3,000...
to support commercial, tribal, or recreational fishing
Fishing
Fishing is the activity of trying to catch wild fish. Fish are normally caught in the wild. Techniques for catching fish include hand gathering, spearing, netting, angling and trapping....
or to supplement the natural numbers of threatened
Threatened species
Threatened species are any speciesg animals, plants, fungi, etc.) which are vulnerable to endangerment in the near future.The World Conservation Union is the foremost authority on threatened species, and treats threatened species not as a single category, but as a group of three categories,...
or endangered species
Endangered species
An endangered species is a population of organisms which is at risk of becoming extinct because it is either few in numbers, or threatened by changing environmental or predation parameters...
, a practice known as fish stocking
Fish stocking
Fish stocking is the practice of raising fish in a hatchery and releasing them into a river, lake, or the ocean to supplement existing populations, or to create a population where none exists...
.

Researchers have raised concerns about hatchery fish potentially breeding with wild fish. Hatchery fish may in some cases compete with wild fish. In the United States and Canada, there have been several salmon and steelhead hatchery reform projects intended to reduce the possibility of negative impacts from hatchery programs. Most salmon and steelhead hatcheries are managed better and follow up to date management practices to ensure any risks are minimized.

Poultry hatcheries produce a majority of the birds consumed in the developed world including chicken
Chicken
The chicken is a domesticated fowl, a subspecies of the Red Junglefowl. As one of the most common and widespread domestic animals, and with a population of more than 24 billion in 2003, there are more chickens in the world than any other species of bird...
s, turkeys, ducks and some other minor bird species. It is a multibillion dollar industry, with highly regimented production systems used to maximize bird size versus feed consumed. Birds are produced and maintained under high density, which makes production and harvesting more economical, but can also generate problems such as the spread of pathogen
Pathogen
A pathogen gignomai "I give birth to") or infectious agent — colloquially, a germ — is a microbe or microorganism such as a virus, bacterium, prion, or fungus that causes disease in its animal or plant host...
s, which can move very quickly through the population when animal densities are high.

Poultry generally start with naturally (chickens) or artificially (turkeys) inseminated
Insemination
Insemination is the deliberate introduction of sperm into the uterus of a mammal or the oviduct of an oviparous animal for the objective of impregnating a female for reproduction...
hens that lay eggs; the eggs are cleaned and shells are checked for soundness before putting them in the incubators. The incubators control temperature and humidity, and turn the eggs until they hatch. Generally large numbers are produced at one time so the resulting birds are uniform in size and can be harvested at the same time. Once the eggs hatch and the chicks are a few days old, they are often vaccinated, beak-trimmed and or toe-clipped; this involves the removal of half of the top beak and the clipping of the toe ends. This is done to prevent the birds from harming each other while they are living in close proximity to each other. After these procedures, they are moved to enclosed buildings to be raised until harvest.

For chickens bred as (egg) layers, only the female chicks are considered to be of value; in excess of 100,000 male chicks can be dropped into an industrial "grinder" and disposed of in a single day.