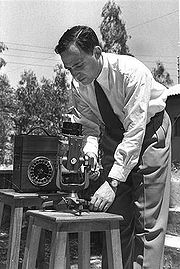 Harry Zvi Tabor is an Israeli physicist
Physicist
A physicist is a scientist who studies or practices physics. Physicists study a wide range of physical phenomena in many branches of physics spanning all length scales: from sub-atomic particles of which all ordinary matter is made to the behavior of the material Universe as a whole...
. He is known as the father of Israeli solar energy
Solar power in Israel
Solar power in Israel and the Israeli solar energy industry has a history that dates to the founding of the country. In the 1950s, Levi Yissar developed a solar water heater to help assuage an energy shortage in the new country. By 1967 around one in twenty households heated its water with the...
. He is generally credited with having brought Israel's solar energy program to international prominence.

Tabor was born in 1917 to Charles and Rebecca Tabor. In 1947 he married Vivenne Landau. He received his bachelor's degree
Bachelor's degree
A bachelor's degree is usually an academic degree awarded for an undergraduate course or major that generally lasts for three or four years, but can range anywhere from two to six years depending on the region of the world...
in physics
Physics
Physics is a natural science that involves the study of matter and its motion through spacetime, along with related concepts such as energy and force. More broadly, it is the general analysis of nature, conducted in order to understand how the universe behaves.Physics is one of the oldest academic...
from the University of London
University of London
-20th century:Shortly after 6 Burlington Gardens was vacated, the University went through a period of rapid expansion. Bedford College, Royal Holloway and the London School of Economics all joined in 1900, Regent's Park College, which had affiliated in 1841 became an official divinity school of the...
and Hebrew University. In 1949 prime minister
Prime minister
A prime minister is the most senior minister of cabinet in the executive branch of government in a parliamentary system. In many systems, the prime minister selects and may dismiss other members of the cabinet, and allocates posts to members within the government. In most systems, the prime...
David Ben-Gurion
David Ben-Gurion
' was the first Prime Minister of Israel.Ben-Gurion's passion for Zionism, which began early in life, led him to become a major Zionist leader and Executive Head of the World Zionist Organization in 1946...
sent a letter to England to offer Tabor a job on the 'physics and engineering desk' of the Research Council of Israel, which he accepted. His first task was to create the Israeli National Physical Laboratory, which had been Tabor's idea as he felt it was essential the new country have the equivalent of the English National Physical Laboratory
National Physical Laboratory, UK
The National Physical Laboratory is the national measurement standards laboratory for the United Kingdom, based at Bushy Park in Teddington, London, England. It is the largest applied physics organisation in the UK.-Description:...
to create standards amongst the different measurements in use in the country, primarily British, Ottoman and metric
Metric system
The metric system is an international decimalised system of measurement. France was first to adopt a metric system, in 1799, and a metric system is now the official system of measurement, used in almost every country in the world...
. Once the laboratory was established, he focused on solar energy for research and development
Research and development
The phrase research and development , according to the Organization for Economic Co-operation and Development, refers to "creative work undertaken on a systematic basis in order to increase the stock of knowledge, including knowledge of man, culture and society, and the use of this stock of...
.

He was instrumental in developing the solar water heater that 95 percent of Israeli households have. In 1992 he was awarded an honorary degree
Honorary degree
An honorary degree or a degree honoris causa is an academic degree for which a university has waived the usual requirements, such as matriculation, residence, study, and the passing of examinations...
from the Weizmann Institute of Science
Weizmann Institute of Science
The Weizmann Institute of Science , known as Machon Weizmann, is a university and research institute in Rehovot, Israel. It differs from other Israeli universities in that it offers only graduate and post-graduate studies in the sciences....
. These simple water heaters operated without pumps, whereby cold water was heated in the panel, which acted as a thermosiphon
Thermosiphon
Thermosiphon refers to a method of passive heat exchange based on natural convection which circulates liquid without the necessity of a mechanical pump...
. This unit in turn became the standard for solar water heating world wide, and helped popularize the commercialization of solar thermal technology in the United States in the 1970s, where Tabor lectured and acted as a consultant to solar start-up companies such as Northrup, Inc. which subsequently merged into ARCO Solar, which became BP Solar. Tabor experimented with various coatings to optimize the absorptivity of solar energy, with minimizing the re-radiation, or emissivity of the heat absorbed. This led to his development of a "black chrome" surface for the copper water-bearing plate.

Tabor worked with the Standards Institute of Israel, to establish testing procedures and an official performance certificates so that a solar collector could not be bought without SII certification.