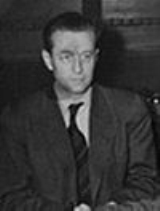 Encyclopedia
Hans Georg Fritzsche was a senior German Nazi
Nazism
Nazism, the common short form name of National Socialism was the ideology and practice of the Nazi Party and of Nazi Germany...
official, ending the war as Ministerialdirektor at the Propagandaministerium.

Fritzsche was born in Bochum
Bochum
Bochum is a city in North Rhine-Westphalia, western Germany. It is located in the Ruhr area and is surrounded by the cities of Essen, Gelsenkirchen, Herne, Castrop-Rauxel, Dortmund, Witten and Hattingen.-History:...
(a city in the Ruhr Area
Ruhr Area
The Ruhr, by German-speaking geographers and historians more accurately called Ruhr district or Ruhr region , is an urban area in North Rhine-Westphalia, Germany. With 4435 km² and a population of some 5.2 million , it is the largest urban agglomeration in Germany...
) and served in the German army
German Army
The German Army is the land component of the armed forces of the Federal Republic of Germany. Following the disbanding of the Wehrmacht after World War II, it was re-established in 1955 as the Bundesheer, part of the newly formed West German Bundeswehr along with the Navy and the Air Force...
in 1917. Post-war he studied briefly at a number of universities before becoming a journalist for the Hugenberg Press and then involved in the new mass media of the radio
Radio
Radio is the transmission of signals through free space by modulation of electromagnetic waves with frequencies below those of visible light. Electromagnetic radiation travels by means of oscillating electromagnetic fields that pass through the air and the vacuum of space...
, working for the German government. In September 1932 he was made head of the Drahtloser Dienst (the wireless news service). On May 1, 1933, he joined the NSDAP. Under Joseph Goebbels
Joseph Goebbels
Paul Joseph Goebbels was a German politician and Reich Minister of Propaganda in Nazi Germany from 1933 to 1945. As one of Adolf Hitler's closest associates and most devout followers, he was known for his zealous oratory and anti-Semitism...
' Reich Ministry he continued to head the radio department before being promoted to the News Section at the Ministry. In mid-1938 he became deputy to Alfred Berndt at the German Press Division. Responsible for controlling German news, the agency was also called the Home or Domestic Press Division. In December 1938 he was made chief of the Home Press Division. In May 1942 Goebbels took personal control of the division, and Fritzsche returned to radio work for the Ministry as Plenipotentiary for the Political Organization of the Greater German Radio and head of the Radio Division of the Ministry.

Fritzsche was taken prisoner by Soviet soldiers in Berlin
Berlin
Berlin is the capital city of Germany and is one of the 16 states of Germany. With a population of 3.45 million people, Berlin is Germany's largest city. It is the second most populous city proper and the seventh most populous urban area in the European Union...
on May 2, 1945. He was tried before the International Military Tribunal
Nuremberg Trials
The Nuremberg Trials were a series of military tribunals, held by the victorious Allied forces of World War II, most notable for the prosecution of prominent members of the political, military, and economic leadership of the defeated Nazi Germany....
. He was charged with conspiracy to commit crimes against peace, war crime
War crime
War crimes are serious violations of the laws applicable in armed conflict giving rise to individual criminal responsibility...
s and crimes against humanity. It was unclear to attendees why he was charged, rumors abounded that he was only in the dock as a stand-in for Goebbels. Shirer remarked that "no-one in the courtroom, including Fritzsche, seemed to know why he was there – he was too small a fry – unless it were as a ghost for Goebbels..." He was one of only three defendants to be acquitted at Nuremberg (along with Hjalmar Schacht
Hjalmar Schacht
Dr. Hjalmar Horace Greeley Schacht was a German economist, banker, liberal politician, and co-founder of the German Democratic Party. He served as the Currency Commissioner and President of the Reichsbank under the Weimar Republic...
and Franz von Papen
Franz von Papen
Lieutenant-Colonel Franz Joseph Hermann Michael Maria von Papen zu Köningen was a German nobleman, Roman Catholic monarchist politician, General Staff officer, and diplomat, who served as Chancellor of Germany in 1932 and as Vice-Chancellor under Adolf Hitler in 1933–1934...
), but he was tried by a West German denazification court and was eventually sentenced to nine years. He was acquitted because it became evident to the tribunal that he had never pushed for the extermination of the Jews, and on two instances he even attempted to stop the publication of the anti-Semitic newspaper Der Stürmer
Der Stürmer
Der Stürmer was a weekly tabloid-format Nazi newspaper published by Julius Streicher from 1923 to the end of World War II in 1945, with brief suspensions in publication due to legal difficulties. It was a significant part of the Nazi propaganda machinery and was vehemently anti-Semitic...
. He was released in September 1950 and died of cancer soon after. His wife Hildegard Fritzsche (born Springer) died the same year.
The source of this article is wikipedia, the free encyclopedia.  The text of this article is licensed under the GFDL.