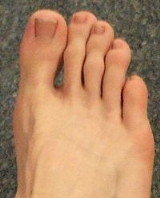 Encyclopedia
In tetrapod
Tetrapod
Tetrapods are vertebrate animals having four limbs. Amphibians, reptiles, birds and mammals are all tetrapods; even snakes and other limbless reptiles and amphibians are tetrapods by descent. The earliest tetrapods evolved from the lobe-finned fishes in the Devonian...
s, the hallux (big toe, great toe) is the innermost (most medial) toe
Toe
Toes are the digits of the foot of a tetrapod. Animal species such as cats that walk on their toes are described as being digitigrade. Humans, and other animals that walk on the soles of their feet, are described as being plantigrade; unguligrade animals are those that walk on hooves at the tips of...
of the foot
Foot
The foot is an anatomical structure found in many vertebrates. It is the terminal portion of a limb which bears weight and allows locomotion. In many animals with feet, the foot is a separate organ at the terminal part of the leg made up of one or more segments or bones, generally including claws...
. Despite its name it may not be the longest toe on the foot of some individuals. It is counted as digit I (one).

The name stems from the Latin
Latin
Latin is an Italic language originally spoken in Latium and Ancient Rome. It, along with most European languages, is a descendant of the ancient Proto-Indo-European language. Although it is considered a dead language, a number of scholars and members of the Christian clergy speak it fluently, and...
for the same, similar to the pollex, which refers to the thumb
Thumb
The thumb is the first digit of the hand. When a person is standing in the medical anatomical position , the thumb is the lateral-most digit...
, the corresponding digit of the hand
Hand
A hand is a prehensile, multi-fingered extremity located at the end of an arm or forelimb of primates such as humans, chimpanzees, monkeys, and lemurs...
.

People who go barefoot
Barefoot
Barefoot is the state of not wearing any footwear. Being barefoot is regarded as a human's natural state, though for functional, fashion and social reasons footwear is worn, at least on some occasions...
or wear open-toed sandals most of the time tend to have big toes that are separate from the others, whereas in persons who wear shoes most of the time, the big toes are squeezed toward touching the second toes.

In human
Human
Humans are the only living species in the Homo genus...
s, the hallux is longer than the second or pointer or index toe for a majority of people. This is an inherited
Mendelian inheritance
Mendelian inheritance is a scientific description of how hereditary characteristics are passed from parent organisms to their offspring; it underlies much of genetics...
trait in humans, where the dominant gene
Gene
A gene is a molecular unit of heredity of a living organism. It is a name given to some stretches of DNA and RNA that code for a type of protein or for an RNA chain that has a function in the organism. Living beings depend on genes, as they specify all proteins and functional RNA chains...
causes a longer second toe ("Morton's toe
Morton's toe
Morton's toe is the common term for the condition of a shortened first metatarsal in relation to the second metatarsal. It is a type of brachymetatarsia. This promotes an anterior position of the second metatarsal-phalangeal joint in relation to the hallux...
" or "Greek foot") while the homozygous
Zygosity
Zygosity refers to the similarity of alleles for a trait in an organism. If both alleles are the same, the organism is homozygous for the trait. If both alleles are different, the organism is heterozygous for that trait...
recessive genotype
Genotype
The genotype is the genetic makeup of a cell, an organism, or an individual usually with reference to a specific character under consideration...
presents with the more common trait: a longer hallux. People with the rare genetic disease fibrodysplasia ossificans progressiva
Fibrodysplasia ossificans progressiva
Fibrodysplasia ossificans progressiva , sometimes referred to as Stone Man Syndrome, is an extremely rare disease of the connective tissue. A mutation of the body's repair mechanism causes fibrous tissue to be ossified when damaged. In many cases, injuries can cause joints to become permanently...
characteristically have a short hallux which appears to turn inward, or medially, in relation to the foot.

In bird
Bird
Birds are feathered, winged, bipedal, endothermic , egg-laying, vertebrate animals. Around 10,000 living species and 188 families makes them the most speciose class of tetrapod vertebrates. They inhabit ecosystems across the globe, from the Arctic to the Antarctic. Extant birds range in size from...
s with anisodactyl or heterodactyl feet, the hallux is opposed or directed backwards and allows for grasping and perching.

While the thumb
Thumb
The thumb is the first digit of the hand. When a person is standing in the medical anatomical position , the thumb is the lateral-most digit...
is often mentioned as one of the signature characteristics in humans, this manual digit remains partially primitive and is actually present in all primates. In humans, the most derived
Derived
In phylogenetics, a derived trait is a trait that is present in an organism, but was absent in the last common ancestor of the group being considered. This may also refer to structures that are not present in an organism, but were present in its ancestors, i.e. traits that have undergone secondary...
digital feature is the hallux.

The big toe is also the most common locus of ingrown nail
Ingrown nail
Onychocryptosis , also known as an ingrown toenail, or unguis incarnatus is a common form of nail disease. It is an often painful condition in which the nail grows so that it cuts into one or both sides of the paronychium or nail bed...
s and gout
Gout
Gout is a medical condition usually characterized by recurrent attacks of acute inflammatory arthritis—a red, tender, hot, swollen joint. The metatarsal-phalangeal joint at the base of the big toe is the most commonly affected . However, it may also present as tophi, kidney stones, or urate...
attacks.