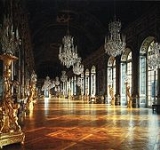 As the principal and most remarkable feature of King Louis XIV of France
Louis XIV of France
Louis XIV , known as Louis the Great or the Sun King , was a Bourbon monarch who ruled as King of France and Navarre. His reign, from 1643 to his death in 1715, began at the age of four and lasted seventy-two years, three months, and eighteen days...
's third building campaign of the Palace of Versailles
Palace of Versailles
The Palace of Versailles , or simply Versailles, is a royal château in Versailles in the Île-de-France region of France. In French it is the Château de Versailles....
(1678–1684), construction of the Hall of Mirrors began in 1678 (Kimball, 1940; Nolhac, 1901; 1925; Marie, 1968; 1977; Verlet, 1985). To provide for the Hall of Mirrors as well as the salon de la guerre and the salon de la paix, which connect the grand appartement du roi with the grand appartement de la reine, architect Jules Hardouin-Mansart appropriated three rooms from each apartment as well as the terrace that separated the two apartments (Marie, 1968; 1977l Verlet, 1985a).

How many paintings where listed?
More

As the principal and most remarkable feature of King Louis XIV of France
Louis XIV of France
Louis XIV , known as Louis the Great or the Sun King , was a Bourbon monarch who ruled as King of France and Navarre. His reign, from 1643 to his death in 1715, began at the age of four and lasted seventy-two years, three months, and eighteen days...
's third building campaign of the Palace of Versailles
Palace of Versailles
The Palace of Versailles , or simply Versailles, is a royal château in Versailles in the Île-de-France region of France. In French it is the Château de Versailles....
(1678–1684), construction of the Hall of Mirrors began in 1678 (Kimball, 1940; Nolhac, 1901; 1925; Marie, 1968; 1977; Verlet, 1985). To provide for the Hall of Mirrors as well as the salon de la guerre and the salon de la paix, which connect the grand appartement du roi with the grand appartement de la reine, architect Jules Hardouin-Mansart appropriated three rooms from each apartment as well as the terrace that separated the two apartments (Marie, 1968; 1977l Verlet, 1985a). The principal feature of this famous hall is the seventeen mirror-clad arches that reflect the seventeen arcaded windows that overlook the gardens. Each arch contains twenty-one mirrors with a total complement of 357 used in the decoration of the galerie des glaces (Verlet, 1985a). The arches themselves are fixed between marble pilasters whose capitals depict the symbols of France. These gilded bronze capitals include the fleur-de-lys and the Gallic cockerel or rooster. Many of the other attributes of the Hall of Mirrors were lost to war for financial purposes, such as the silver table pieces and guéridons were melted by order of Louis XIV in 1689 to finance the War of the League of Augsburg, or the Nine Years' War (Dangeau, 1854-6; Josephson, 1926; Mercure Galant, 1682; Cosnac, 1984; Verlet, 1985a).

In the 17th century, mirror
Mirror
A mirror is an object that reflects light or sound in a way that preserves much of its original quality prior to its contact with the mirror. Some mirrors also filter out some wavelengths, while preserving other wavelengths in the reflection...
s were among the most expensive items to possess and at the time, the Venetian Republic held the monopoly on the manufacture of mirrors. In order to maintain the integrity of his philosophy of mercantilism
Mercantilism
Mercantilism is the economic doctrine in which government control of foreign trade is of paramount importance for ensuring the prosperity and security of the state. In particular, it demands a positive balance of trade. Mercantilism dominated Western European economic policy and discourse from...
, which required that all items used in the decoration of Versailles be made in France, Jean-Baptiste Colbert
Jean-Baptiste Colbert
Jean-Baptiste Colbert was a French politician who served as the Minister of Finances of France from 1665 to 1683 under the rule of King Louis XIV. His relentless hard work and thrift made him an esteemed minister. He achieved a reputation for his work of improving the state of French manufacturing...
enticed several workers from Venice to make mirrors at the Manufacture royale de glaces de miroirs
Manufacture royale de glaces de miroirs
The Manufacture royale de glaces de miroirs was the royal manufactory that produced the glass of Louis XIV's Hall of Mirrors at Versailles, and the distant fore-runner of Saint-Gobain, the French glass manufacturer and industrial complex of today...
. According to legend, in order to keep its monopoly, the government of the Venetian Republic sent agents to France to poison the workers whom Colbert had brought to France (Verlet, 1985a). The Hall of Mirrors' technological innovation which made it such an exceptional space during its day was the high temperature melting process of glass which was utilized to construct the mirrors. This was the first time this process had been done, adding to its significance.

The Hall of Mirrors' dimensions are 73.0 m × 10.5 m × 12.3 m (239.5 ft × 34.4 ft × 40.4 ft) and is flanked by the salon de la guerre (north) and the salon de la paix (south). Construction on the galerie and its two salons continued until 1684, at which time it was pressed into use for court and state functions. The ceiling decoration is dedicated to the political policies and military victories of Louis XIV. The central panel of the ceiling, Le roi gouverne par lui-même (The king governs alone) alludes to the establishment of the personal reign of Louis XIV in 1661. The present decorative schema represents the last of three that were presented to Louis XIV. The original decorative plan was to have depicted the exploits of Apollo
Apollo
Apollo is one of the most important and complex of the Olympian deities in Greek and Roman mythology...
, being consistent with the imagery associated with the Sun-King, Louis XIV. However, when the king learned that his brother, Philippe I, Duke of Orléans
Philippe I, Duke of Orléans
Philippe of France was the youngest son of Louis XIII of France and his queen consort Anne of Austria. His older brother was the famous Louis XIV, le roi soleil. Styled Duke of Anjou from birth, Philippe became Duke of Orléans upon the death of his uncle Gaston, Duke of Orléans...
, had commissioned Pierre Mignard
Pierre Mignard
Pierre Mignard , called "Le Romain" to distinguish him from his brother Nicolas Mignard, was a French painter...
to decorate the ceiling of the grande galerie of his brother's residence at Château de Saint-Cloud
Château de Saint-Cloud
The Château de Saint-Cloud was a Palace in France, built on a magnificent site overlooking the Seine at Saint-Cloud in Hauts-de-Seine, about 10 kilometres west of Paris. Today it is a large park on the outskirts of the capital and is owned by the state, but the area as a whole has had a large...
, Louis XIV rejected the plan. The next decorative plan was one in which the exploits of Hercules
Hercules
Hercules is the Roman name for Greek demigod Heracles, son of Zeus , and the mortal Alcmene...
— as allegories to the actions of Louis XIV — were to be depicted. Again, as with the first plan, the Hercules theme was rejected by the king. The final plan represents military victories of Louis XIV starting with the Treaty of the Pyrenees
Treaty of the Pyrenees
The Treaty of the Pyrenees was signed to end the 1635 to 1659 war between France and Spain, a war that was initially a part of the wider Thirty Years' War. It was signed on Pheasant Island, a river island on the border between the two countries...
(1659) to the Treaty of Nijmegen (1678–1679). In a departure from the decoration of the ceilings in the grand appartement du roi, Le Brun has depicted Louis XIV directly, and has ceased to refer to the king in allegorical guises. In this way, themes such as good governance and military prowess are rendered with Louis XIV himself as the key figure (Montagu, 1992; Marie, 1972; Verlet, 1985a).

In the successive reigns of Louis XV and Louis XVI, the Hall of Mirrors continued to serve for family and court functions. Embassies, births, and marriages were fêted in this room; however, perhaps the most celebrated event of the 18th century occurred on 25 February 1745: the celebrated bal des Ifs (Ball of the Yew Trees). It was during this costume ball that Louis XV, who was dressed as a yew
Taxus
Taxus is a genus of yews, small coniferous trees or shrubs in the yew family Taxaceae. They are relatively slow-growing and can be very long-lived, and reach heights of 1-40 m, with trunk diameters of up to 4 m...
tree, met Jeanne-Antoinette Poisson d'Étiolles, who was costumed as Diana
Diana (mythology)
In Roman mythology, Diana was the goddess of the hunt and moon and birthing, being associated with wild animals and woodland, and having the power to talk to and control animals. She was equated with the Greek goddess Artemis, though she had an independent origin in Italy...
, goddess of the hunt. Jeanne-Antoinette, who became Louis XV's mistress, is better known to history as the Marquise de Pompadour (Marie, 1984; Nolhac, 1926).

In the 19th century, at the conclusion of the Franco-Prussian War
Franco-Prussian War
The Franco-Prussian War or Franco-German War, often referred to in France as the 1870 War was a conflict between the Second French Empire and the Kingdom of Prussia. Prussia was aided by the North German Confederation, of which it was a member, and the South German states of Baden, Württemberg and...
, the Prussian king, William I
William I, German Emperor
William I, also known as Wilhelm I , of the House of Hohenzollern was the King of Prussia and the first German Emperor .Under the leadership of William and his Chancellor Otto von Bismarck, Prussia achieved the unification of Germany and the...
, was declared German emperor — thus establishing the (second) German Empire
German Empire
The German Empire refers to Germany during the "Second Reich" period from the unification of Germany and proclamation of Wilhelm I as German Emperor on 18 January 1871, to 1918, when it became a federal republic after defeat in World War I and the abdication of the Emperor, Wilhelm II.The German...
— on 18 January 1871 in the Hall of Mirrors by Bismarck and the victorious German princes and lords. This was seen as a victory with heavy symbolism for the Germans and a stinging insult for the defeated French. French Prime Minister Clemenceau
Georges Clemenceau
Georges Benjamin Clemenceau was a French statesman, physician and journalist. He served as the Prime Minister of France from 1906 to 1909, and again from 1917 to 1920. For nearly the final year of World War I he led France, and was one of the major voices behind the Treaty of Versailles at the...
chose the Hall of Mirrors to sign the Treaty of Versailles
Treaty of Versailles
The Treaty of Versailles was one of the peace treaties at the end of World War I. It ended the state of war between Germany and the Allied Powers. It was signed on 28 June 1919, exactly five years after the assassination of Archduke Franz Ferdinand. The other Central Powers on the German side of...
that ended World War I on 28 June 1919.

The Hall of Mirrors is still pressed into service for state occasions of the Fifth Republic
French Fifth Republic
The Fifth Republic is the fifth and current republican constitution of France, introduced on 4 October 1958. The Fifth Republic emerged from the collapse of the French Fourth Republic, replacing the prior parliamentary government with a semi-presidential system...
, such as receptions for visiting heads of state.

In 2007, three years of restorations to the hall were completed, including the replacement of 48 of the 357 antique mercury mirror
Mercury mirror
Mercury mirror can mean:*A glass mirror created by Mercury silvering**Mercury glass mirror.*A component of liquid mirror telescopes...
s by Vincent Guerre. The restoration of the hall cost €12 million, or about $16 million, and included general cleaning, repairing statues, retouching paintings, tile work, and a complete closure of the hall to which 3 million people a year annually visit.