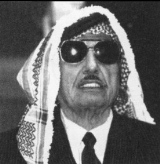 Field Marshal
Field Marshal
Field Marshal is a military rank. Traditionally, it is the highest military rank in an army.-Etymology:The origin of the rank of field marshal dates to the early Middle Ages, originally meaning the keeper of the king's horses , from the time of the early Frankish kings.-Usage and hierarchical...
Habis al-Majali (Arabic
Arabic language
Arabic is a name applied to the descendants of the Classical Arabic language of the 6th century AD, used most prominently in the Quran, the Islamic Holy Book...
: حابس المجالي; c. 1914 - April 22, 2001). A noted Jordan
Jordan
Jordan , officially the Hashemite Kingdom of Jordan , Al-Mamlaka al-Urduniyya al-Hashemiyya) is a kingdom on the East Bank of the River Jordan. The country borders Saudi Arabia to the east and south-east, Iraq to the north-east, Syria to the north and the West Bank and Israel to the west, sharing...
ian soldier from the southern city of Kerak
Kerak
Kerak Castle is a large crusader castle located in Kerak in Jordan. It is one of the largest crusader castles in the Levant.Construction of the castle began in the 1140s, under Pagan, the butler of Fulk of Jerusalem. The Crusaders called it Crac des Moabites or "Karak in Moab", as it is frequently...
, Habis served as Chief of Staff, Jordanian Armed Forces 1958-1975, Minister of Defence 1967-1968, and 20-year member of the Jordanian Senate 1981?-2001.

Habis Pasha
Pasha
Pasha or pascha, formerly bashaw, was a high rank in the Ottoman Empire political system, typically granted to governors, generals and dignitaries. As an honorary title, Pasha, in one of its various ranks, is equivalent to the British title of Lord, and was also one of the highest titles in...
he is the son of Sheik Refefan

Habis joined the Arab Legion
Arab Legion
The Arab Legion was the regular army of Transjordan and then Jordan in the early part of the 20th century.-Creation:...
in 1932, and soon impressed Glubb Pasha
John Bagot Glubb
Lieutenant-General Sir John Bagot Glubb KCB, CMG, DSO, OBE, MC better known as Glubb Pasha , was a British soldier, scholar and author, best known for leading and training Transjordan's Arab Legion 1939-1956 as its commanding general...
. Despite acquiring modern skills, he never lost his Bedouin
Bedouin
The Bedouin are a part of a predominantly desert-dwelling Arab ethnic group traditionally divided into tribes or clans, known in Arabic as ..-Etymology:...
elan. King Hussein's biographer, James Lunt, dubbed him the grand seigneur of Karak and beau sabreur of the army.

Habis Pasha
Pasha
Pasha or pascha, formerly bashaw, was a high rank in the Ottoman Empire political system, typically granted to governors, generals and dignitaries. As an honorary title, Pasha, in one of its various ranks, is equivalent to the British title of Lord, and was also one of the highest titles in...
was the only Arab
Arab
Arab people, also known as Arabs , are a panethnicity primarily living in the Arab world, which is located in Western Asia and North Africa. They are identified as such on one or more of genealogical, linguistic, or cultural grounds, with tribal affiliations, and intra-tribal relationships playing...
commander to win military victories against Israel
Israel
The State of Israel is a parliamentary republic located in the Middle East, along the eastern shore of the Mediterranean Sea...
is, Palestinians and Syria
Syria
Syria , officially the Syrian Arab Republic , is a country in Western Asia, bordering Lebanon and the Mediterranean Sea to the West, Turkey to the north, Iraq to the east, Jordan to the south, and Israel to the southwest....
ns alike. His baptism of fire came during the first Arab-Israeli war, when he successfully defended the town of Latrun
Latrun
Latrun is a strategic hilltop in the Ayalon Valley in Israel overlooking the road to Jerusalem. It is located 25 kilometers west of Jerusalem and 14 kilometers southeast of Ramla.-Etymology:...
, 17 miles west of Jerusalem, against the Israelis.

The Jewish state had declared independence on May 14, 1948. The next day, the armies of five Arab nations invaded, among them the Bedouin of Transjordan's crack Arab Legion
Arab Legion
The Arab Legion was the regular army of Transjordan and then Jordan in the early part of the 20th century.-Creation:...
, under the supreme command of Glubb Pasha. They immediately secured the West Bank, then rushed to fill the vacuum created by British troops leaving Jerusalem.

Meanwhile, the Jewish forces were desperate to keep open their lines of communication with the 85,000 besieged Jews of Jerusalem at Latrun, the epicentre of the only route linking Tel Aviv with Jerusalem.

Lieutenant Colonel Majali, the first Arab to head a legion regiment, occupied a strategic hill straddling the nearby Bab al Wad (Gate to the Valley). His spies fanned the countryside, while he held a deserted British police fort, built near a Trappist monastery in 1936.

When the Haganah attacked on May 25, Majali's Fourth Regiment was ready. Their camouflaged mortars, machine-guns and cannon caught the mainly immigrant recruits on open ground, and cut them to shreds over 15 hours. two months before his death, Habis claimed that he had caught a young Lieutenant Ariel Sharon
Ariel Sharon
Ariel Sharon is an Israeli statesman and retired general, who served as Israel’s 11th Prime Minister. He has been in a permanent vegetative state since suffering a stroke on 4 January 2006....
in the battle. The new Israeli prime minister denied the claim, but Habis was adamant. "Sharon is like a grizzly bear," he grumbled. "I captured him for 9 days, I healed his wounds and released him due to his insignificance.", few fellow high ranking Jordanian army officers testified in favour of this account, no others.

On June 9, an Israeli Palmach
Palmach
The Palmach was the elite fighting force of the Haganah, the underground army of the Yishuv during the period of the British Mandate of Palestine. The Palmach was established on May 15, 1941...
strike-force attempted a second raid on Latrun. This, too, faltered for want of reinforcements, only yards from Majali's command post. In mid-July, he repulsed a final assault - and returned to Amman a thrice-conquering hero. He restored a modicum of pride to Arabs, for whom 1948 spelt nakba (disaster).

Nonetheless, it was a Pyrrhic victory. Despite their losses at Latrun, the Haganah pinned down Jordanian troops who might have been fighting in Jerusalem. The Israelis also managed to build a makeshift bypass round Latrun and siphoned through vital arms, water and supplies.

It was in the Old City, three years later, that Habis Al-Majali experienced tragedy at first-hand. For two years, he had been the private escort to King Abdullah of Jordan
Abdullah I of Jordan
Abdullah I bin al-Hussein, King of Jordan [‘Abd Allāh ibn al-Husayn] عبد الله الأول بن الحسين born in Mecca, Second Saudi State, was the second of three sons of Sherif Hussein bin Ali, Sharif and Emir of Mecca and his first wife Abdiyya bint Abdullah...
. Then, on July 20, 1951, as he was ushering the king to prayers at the Al Aqsa mosque, Abdullah was shot dead by an anti-Hashemite
Hashemite
Hashemite is the Latinate version of the , transliteration: Hāšimī, and traditionally refers to those belonging to the Banu Hashim, or "clan of Hashim", a clan within the larger Quraish tribe...
Palestinian.


In the Stability of Jordan

Certainly, King Hussein found him indispensable. He ruthlessly tracked down the Hashemite ruler's Nasserite enemies during the uprising of 1958. In 1960, he restored order after pro-Syrian agents had murdered his cousin, the Jordanian prime minister, Hazaa'. Forced to relinquish overall command to Cairo on the eve of the six-day war in June 1967, and bemused by conflicting orders, he lost the West Bank to Israel. He resigned, but served as defence minister for another year.

There were more setbacks in store. Majali backed Prince Na'if as successor to the Jordanian throne, though, in the event, his elder brother, Prince Talal
Talal of Jordan
Talal I bin Abdullah 26 February 1909 – 7 July 1972) was the second King of Jordan from 20 July 1951 until forced to abdicate in favour of his son Hussein due to health reasons on 11 August 1952....
, won the crown. Matters only improved after King Hussein
Hussein of Jordan
Hussein bin Talal was the third King of Jordan from the abdication of his father, King Talal, in 1952, until his death. Hussein's rule extended through the Cold War and four decades of Arab-Israeli conflict...
replaced his father, Talal, in 1953. Three years later, Glubb was dismissed, and, in 1957, Majali became chief-of-staff of the Jordanian armed forces, a post he held until June 1967.

Habis did so with relish. Over 10 days, his troops routed the fedayeen; some 3,500 fighters died on both sides. He also repulsed a pro-PLO Syrian invasion - destroying half the enemy's armour in the process, and inadvertently setting off the coup that brought President al-Assad to power in Damascus. In July 1971, the remaining PLO units in Jordan were expelled to Lebanon.

Despite these victories, the old warhorse found it hard to forgive old enemies; in 1994, for instance, he boycotted the official ceremonies marking Jordan's peace deal with Israel. Seen as atavistic by many, he represented a somehow nobler, if not gentler, past. He is survived by seven children and 27 grandchildren; his wife Bazaa' predeceased him.

A famous Dehia (traditional bedouin folk song that rhymes the first part of a verse to the second both are usually made of 8-syallabuls) which is sung in most traditional occasions, especially in his hometown Kerak features Habis as the hero of it

A platoon led by Habis eradicates Green and Hard

Meaning:
An army led by Habis, will overcome all obstacles regardless.

Majalis have long dominated Karak, an Arabian province that joined the Emirate of Transjordan in 1646. They had integrated comfortably into Bedouin society. Earlier, and more crucially, they had welcomed Hashemite rule in Jordan.

Thus, as a reward for unswerving loyalty, Majalis have been prime ministers, police chiefs and speakers of the Jordanian national assembly; Habis himself served some 20 years as a senator, including a period on the foreign affairs committee. Nonetheless, he preferred martial matters to diplomatic niceties, and, as his brother-in-law, Hazza, once told the British ambassador in Amman: "We Majalis are used to killing and being killed."