Very little is written about the period 1930-1938. From other sources it appears that the Sarona and other German communities were strongly pro-Nazi....
More

Encyclopedia
Sarona was a German Templer
Templers (religious believers)
Templers are members of the Temple Society , a German Protestant sect with roots in the Pietist movement of the Lutheran Church. The Templers were expelled from the church in 1858 because of their millennial beliefs. Their aim was to realize the apocalyptic visions of the prophets of Israel in the...
colony northeast of the city of Jaffa
Jaffa
Jaffa is an ancient port city believed to be one of the oldest in the world. Jaffa was incorporated with Tel Aviv creating the city of Tel Aviv-Yafo, Israel. Jaffa is famous for its association with the biblical story of the prophet Jonah.-Etymology:...
. It was one of the earliest modern villages established in Palestine
Palestine
Palestine is a conventional name, among others, used to describe the geographic region between the Mediterranean Sea and the Jordan River, and various adjoining lands....
. Today it is a neighborhood in Tel Aviv
Tel Aviv
Tel Aviv , officially Tel Aviv-Yafo , is the second most populous city in Israel, with a population of 404,400 on a land area of . The city is located on the Israeli Mediterranean coastline in west-central Israel. It is the largest and most populous city in the metropolitan area of Gush Dan, with...
, Israel
Israel
The State of Israel is a parliamentary republic located in the Middle East, along the eastern shore of the Mediterranean Sea...
. 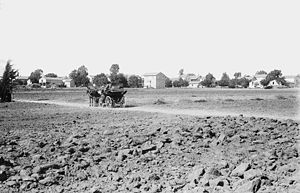 The Templer
Templers (religious believers)
Templers are members of the Temple Society , a German Protestant sect with roots in the Pietist movement of the Lutheran Church. The Templers were expelled from the church in 1858 because of their millennial beliefs. Their aim was to realize the apocalyptic visions of the prophets of Israel in the...
settlement of Sarona was one of the first modern agricultural settlements in Palestine and became a model for the Jewish pioneers. In August 1871, the Templers purchased 60 hectares of land from a Greek monastery north of Jaffa. Part of the Plains of Sharon (after which it was named) near the River Audsche (Yarkon River) it was four kilometres from Jaffa. In October 1871, the foundation stones were laid for the first houses. Extreme hardship and disease took a heavy toll in human life the first few years. Malaria
Malaria
Malaria is a mosquito-borne infectious disease of humans and other animals caused by eukaryotic protists of the genus Plasmodium. The disease results from the multiplication of Plasmodium parasites within red blood cells, causing symptoms that typically include fever and headache, in severe cases...
caused the deaths of 28 of the 125 settlers of Sarona in 1872 alone. In an effort to dry the marshy land 1,300 eucalyptus
Eucalyptus
Eucalyptus is a diverse genus of flowering trees in the myrtle family, Myrtaceae. Members of the genus dominate the tree flora of Australia...
trees were planted.

By 1889, 269 persons lived in Sarona. There were 41 homes, a communal hall, a winery, workshops, barns and sheds. The Sarona colonists brought modern farming tools and practices to the Holy Land
Holy Land
The Holy Land is a term which in Judaism refers to the Kingdom of Israel as defined in the Tanakh. For Jews, the Land's identifiction of being Holy is defined in Judaism by its differentiation from other lands by virtue of the practice of Judaism often possible only in the Land of Israel...
. They focused on crops and products they could readily sell. This "agriculture-for-profit" was an economic innovation in a land that for centuries had practiced only "self-sustaining farming." Grain crops and dairy industry first, then orchards and vineyards were planted. Faced with a shortage of financial resources for infrastructure development, the community introduced Frondienst, a compulsory work system where every male member was required to do a certain number of hours of community work each month. The building of roads, development of land, roads and drainage and community facilities could thus be scheduled. The researcher and author Sven Hedin
Sven Hedin
Sven Anders Hedin KNO1kl RVO was a Swedish geographer, topographer, explorer, photographer, and travel writer, as well as an illustrator of his own works...
wrote of his visit to Sarona in 1916 "...many plants were in blossom. They mainly grow grapes, oranges and vegetables, [but] like in old times they also produce milk and honey."

In November 1917, British troops occupied Sarona, turning the community house into a field hospital and commandeering other buildings for military use. In July 1918, the Templers (a total of 850 people) were interned in Egypt
Egypt
Egypt , officially the Arab Republic of Egypt, Arabic: , is a country mainly in North Africa, with the Sinai Peninsula forming a land bridge in Southwest Asia. Egypt is thus a transcontinental country, and a major power in Africa, the Mediterranean Basin, the Middle East and the Muslim world...
at Helouan near Cairo
Cairo
Cairo , is the capital of Egypt and the largest city in the Arab world and Africa, and the 16th largest metropolitan area in the world. Nicknamed "The City of a Thousand Minarets" for its preponderance of Islamic architecture, Cairo has long been a centre of the region's political and cultural life...
. The Red Cross, Quakers and Unitarians
Unitarianism
Unitarianism is a Christian theological movement, named for its understanding of God as one person, in direct contrast to Trinitarianism which defines God as three persons coexisting consubstantially as one in being....
took up their cause, and on July 29, 1920, after 270 internees had been repatriated in April to Bad Mergentheim
Bad Mergentheim
Bad Mergentheim is a town in the Main-Tauber district in the German state of Baden-Württemberg.-History:Mergentheim is mentioned in chronicles as early as 1058, as the residence of the family of the counts of Hohenlohe, who early in the 13th century assigned the greater part of their estates in...
in Germany
Germany
Germany , officially the Federal Republic of Germany , is a federal parliamentary republic in Europe. The country consists of 16 states while the capital and largest city is Berlin. Germany covers an area of 357,021 km2 and has a largely temperate seasonal climate...
, the House of Lords permitted the remaining internees to return to Palestine. The residents of Sarona returned to a plundered and vandalized colony. Following negotiations with the British authorities, compensation was paid, in some cases up to 50%.

By 1925 Sarona was still a small settlement, although grown in area. It was still a farming community but more emphasis was placed on tradesmen. With the increasing Jewish immigration to Palestine (80,000 immigrants arrived in 1920-1926 alone) the settlement prospered due to a ready market for their produce and their services.

During the 1930s, with the rise of the Nazi party to power, many of the Templers embraced Nazi ideology. Nazi party branches were established in every colony and Nazi official, diplomats, Gestapo and S.S. officers – including Adolf Eichmann
Adolf Eichmann
Adolf Otto Eichmann was a German Nazi and SS-Obersturmbannführer and one of the major organizers of the Holocaust...
– visited Palestine and were received with great enthusiasm by the men and women of Sarona. About a third of the Templer colonies registered as supporters of the new rule and become Nazi party members. Nazi youth movement activities were popular and the plans to open schools based on Nazi ideologies turned the once-friendly Jewish Yishuv away and Templer produce was boycotted.

At the end of August 1939, a few days before World War II
World War II
World War II, or the Second World War , was a global conflict lasting from 1939 to 1945, involving most of the world's nations—including all of the great powers—eventually forming two opposing military alliances: the Allies and the Axis...
broke out, young Templer men eligible for the draft were conscripted into the Wehrmacht and left for Germany. Those who stayed behind became enemy nationals. Sarona, together with the three other agricultural settlements - Wilhelma, Bethlehem of Galilee and Waldheim
Alonei Abba
Alonei Abba is a moshav shitufi, or semi-cooperative village, in northern Israel. It is located in the Lower Galilee near Bethlehem of Galilee and Alonim, in the hills east of Kiryat Tivon. Alonei Abba falls under the jurisdiction of the Jezreel Valley Regional Council...
- became "perimeter" compounds into which all Germans living in Palestine were interned. Sarona held close to 1,000 persons behind a guarded, 4 m high barbed-wire fence. In July 1941, 198 people from Sarona, together with almost 400 from the other internment camps were deported to Australia
Australia
Australia , officially the Commonwealth of Australia, is a country in the Southern Hemisphere comprising the mainland of the Australian continent, the island of Tasmania, and numerous smaller islands in the Indian and Pacific Oceans. It is the world's sixth-largest country by total area...
on the Queen Elizabeth. They were interned in Tatura in Central Victoria Australia until 1947. By November 1944, most of the remaining Sarona residents had been moved to the camp in Wilhelma camp. The last group was sent there in September 1945.


Establishment of the Kirya

The former Sarona houses were taken over and used by the British army and mandatory government, and as such were the target of raids and attacks by the Zionist underground organizations during their 1945–1947 struggle against British rule.

In 1948, when the British Mandate ended and British troops left Sarona, the old houses and army barracks were used by the newly-formed Israeli government as offices. The area became known as the "Kirya". Part became a military compound, comprising the Israeli Ministry of Defense, the General Staff of the Israeli Defense Forces, and various other military installations. The pavement opposite the Ministry of Defense gate became since the 1970's the habitual venue for demonstrations by peace groups protesting government policies in the Occupied Territories. Other parts of the of the former Sarona were used to house the offices of civil ministries in the Israeli Government.

With the rapid growth of Tel Aviv, the Kirya became prime real-estate in the heart of the city. When plans for redeveloping the area were proposed in the mid-1970s, preservationists successfully campaigned against demolition. Consulting with historians, it was decided Sarona was of heritage value and 18 structures with distinct architectural styles would be preserved.

Civil government department were moved out of the low buildings and into a high office building erected in the eastern end. During the widening of the Kaplan Street, the main thoroughfare, considerable effort was made to move the historic buildings intact. These are intended to become an area of cafés and recreation. Also in the military part, a high-rise military headquarters was erected, topped by a helicopter pad. However, historic buildings in the military compound remain in IDF used, with access denied to others than military personnel. 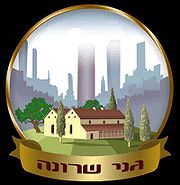 Since 2003, the Tel Aviv municipality has been working to preserve and restore Sarona. To make way for a highway, techniques were developed for moving some of the houses to a more convenient location.

In 2008, after the widening of Kaplan Street
Kaplan Street
Kaplan Street is a major thoroughfare in central Tel Aviv, Israel, running from the Azrieli Center interchange on its eastern edge, to Ibn Gabirol Street on its western edge. Named after Eliezer Kaplan, an important Israeli politician, the street connects the city center to the Ayalon Highway, and...
, which required moving four houses and the old Gemeindehaus, the area to the south was renamed Ganei Sarona (Sarona Gardens).
The source of this article is wikipedia, the free encyclopedia.  The text of this article is licensed under the GFDL.