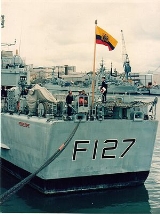 HMS Penelope (F127) was a of the Royal Navy
Royal Navy
The Royal Navy is the naval warfare service branch of the British Armed Forces. Founded in the 16th century, it is the oldest service branch and is known as the Senior Service...
. Like other ships of the class, Penelope was named after a figure of mythology
Penelope
In Homer's Odyssey, Penelope is the faithful wife of Odysseus, who keeps her suitors at bay in his long absence and is eventually reunited with him....
. HMS Penelope was launched on 17 August 1962 and commissioned on 31 October 1963. Penelope was intended to be part of the and was to have been named Coventry (and before that Panther), but instead became part of the Leander-class.

Upon commissioning, Penelope joined the 20th Frigate Squadron which was based in the UK
United Kingdom
The United Kingdom of Great Britain and Northern IrelandIn the United Kingdom and Dependencies, other languages have been officially recognised as legitimate autochthonous languages under the European Charter for Regional or Minority Languages...
. In 1966, Penelope underwent a refit that re-roled her into a trials ship and led to the removal of much of her weapons including her one twin 4.5-in gun and later the whole turret.

In 1968, Penelope assisted in the aftermath of the Aer Lingus Flight 712
Aer Lingus Flight 712
Flight 712, operated by Aer Lingus crashed en route from Cork to London on 24 March 1968 killing 61 passengers and crew. The plane, a Vickers Viscount 803 named "St. Phelim", crashed into the sea off Tuskar Rock, County Wexford. Although the investigation into the crash lasted two years, a cause...
crash in the Irish Sea
Irish Sea
The Irish Sea separates the islands of Ireland and Great Britain. It is connected to the Celtic Sea in the south by St George's Channel, and to the Atlantic Ocean in the north by the North Channel. Anglesey is the largest island within the Irish Sea, followed by the Isle of Man...
. There has been a number of conspiracy theories about the crash, including the alleged involvement of Penelope. The theory goes that Penelope, while performing tests, mistook the aircraft for a target drone and shot her down. All conspiracy theories have been refuted by the Ministry of Defence
Ministry of Defence (United Kingdom)
The Ministry of Defence is the United Kingdom government department responsible for implementation of government defence policy and is the headquarters of the British Armed Forces....
(MoD).

The following year, Penelope was present in West Germany
West Germany
West Germany is the common English, but not official, name for the Federal Republic of Germany or FRG in the period between its creation in May 1949 to German reunification on 3 October 1990....
during the Kiel Week
Kiel Week
Kiel Week is an annual sailing event in Kiel, Germany. It is the largest sailing event in the world, and also one of the largest Volksfest in Europe.- Procedure :...
festival which combined a yachting race and festival events. Penelope took part in a variety of tests in the 1970s, including Sea Wolf missile
Sea Wolf missile
Sea Wolf is a naval guided missile system designed and built by BAC, later to become British Aerospace Dynamics . It is an automated point-defence weapon system designed as a final line of defence against both sea-skimming and high angle anti-ship missiles and aircraft...
tests in 1977. In 1981, Penelope was fitted with the Exocet
Exocet
The Exocet is a French-built anti-ship missile whose various versions can be launched from surface vessels, submarines, helicopters and fixed wing aircraft. Hundreds were fired in combat during the 1980s.-Etymology:...
missile with the intention of using Penelope to test it.

In 1982, Penelope took part in the Falklands War
Falklands War
The Falklands War , also called the Falklands Conflict or Falklands Crisis, was fought in 1982 between Argentina and the United Kingdom over the disputed Falkland Islands and South Georgia and the South Sandwich Islands...
as part of "Bristol group
Bristol group
The Bristol group was a group of British warships that were sent to the "Total Exclusion Zone" as reinforcements late in the Falklands War. It consisted of:DestroyersFrigatesRoyal Fleet Auxiliaries*RFA Bayleaf*RFA Olna...
", which included two other Leander-class ships - and - and did not reach the Falkland Islands
Falkland Islands
The Falkland Islands are an archipelago in the South Atlantic Ocean, located about from the coast of mainland South America. The archipelago consists of East Falkland, West Falkland and 776 lesser islands. The capital, Stanley, is on East Falkland...
area of operations until the 26 May. Upon arrival, Penelope mainly performed escort duties, including escorting the damaged in late May, who had suffered damage after being hit by cannon fire and bombs.

On the 13th June, Penelope's Lynx
Westland Lynx
The Westland Lynx is a British multi-purpose military helicopter designed and built by Westland Helicopters at its factory in Yeovil. Originally intended as a utility craft for both civil and naval usage, military interest led to the development of both battlefield and naval variants...
helicopter struck the already stranded Argentinian patrol boat Rio Iguazu with a Sea Skua missile
Sea Skua
The Sea Skua is a British lightweight short-range air-to-surface missile designed for use from helicopters against ships. It is primarily used by the Royal Navy on the Westland Lynx helicopter, although Kuwait uses it in a shore battery and on their Umm Al Maradem fast attack craft.The British...
. Penelope returned home in September 1982.

Soon after, Penelope undertook a Falklands patrol in the tense aftermath of the war, and did not return home until June 1983. The following year, Penelope deployed to the South Atlantic yet again, patrolling and performing other duties in that region. In 1988, Penelope lost steering and collided with the starboard side of the , a Canadian supply ship. The Penelope caught the Preserver's starboard anchor, cutting her port side open. The Canadian vessel suffered $260,000 damage, while the Penelope suffered damage estimated in the millions.

Commodore Nigel Bray captained HMS Penelope until her decommissioning from the Royal Navy in 1991, Penelope was decommissioned and subsequently sold, along with , to Ecuador
Ecuador
Ecuador , officially the Republic of Ecuador is a representative democratic republic in South America, bordered by Colombia on the north, Peru on the east and south, and by the Pacific Ocean to the west. It is one of only two countries in South America, along with Chile, that do not have a border...
. She was renamed Presidente Eloy Alfaro after President Eloy Alfaro
Eloy Alfaro
José Eloy Alfaro Delgado was the President of Ecuador from 1895 to 1901 and from 1906 to 1911. He became one the strongest opponents of pro-Catholic conservative President Gabriel Garcia Moreno...
, a prominent Ecuadorian martyred reformer of the early 20th century.