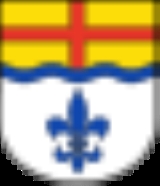 The area of the current Höxter district was part of the Bishopric of Paderborn
Bishopric of Paderborn
The Archdiocese of Paderborn is an Archdiocese of the Latin Rite of the Roman Catholic Church in Germany; its seat is Paderborn. It was a diocese from its foundation in 799 until 1802, and again from 1821 until 1930. In 1930, it was promoted to an archdiocese...
until it was included into Prussia
Prussia
Prussia was a German kingdom and historic state originating out of the Duchy of Prussia and the Margraviate of Brandenburg. For centuries, the House of Hohenzollern ruled Prussia, successfully expanding its size by way of an unusually well-organized and effective army. Prussia shaped the history...
in 1802. In 1816 the new Prussian government created three districts in the area, Höxter, Brakel and Warburg. In 1832 Höxter and Brakel were merged.

The present district was created in 1975 when the former districts Warburg and Höxter were merged. At the same time the towns and municipalities in the district were merged to form the today's ten towns.