In Norse mythology
Norse mythology
Norse mythology, a subset of Germanic mythology, is the overall term for the myths, legends and beliefs about supernatural beings of Norse pagans. It flourished prior to the Christianization of Scandinavia, during the Early Middle Ages, and passed into Nordic folklore, with some aspects surviving...
, Gylfi, Gylfe, Gylvi, or Gylve was the earliest king in Scandinavia recorded. The traditions on Gylfi deal with how he was tricked by the gods and his relations with the goddess Gefjon
Gefjon
In Norse mythology, Gefjon or Gefjun is a goddess associated with ploughing, the Danish island of Zealand, the legendary Swedish king Gylfi, the legendary Danish king Skjöldr, foreknowledge, and virginity...
.


The creation of Zealand

The Ynglinga saga
Ynglinga saga
Ynglinga saga is a legendary saga, originally written in Old Norse by the Icelandic poet Snorri Sturluson about 1225. It was first translated into English and published in 1844....
section of Snorri's Heimskringla
Heimskringla
Heimskringla is the best known of the Old Norse kings' sagas. It was written in Old Norse in Iceland by the poet and historian Snorri Sturluson ca. 1230...
and the Eddic poem Ragnarsdrápa
Ragnarsdrápa
Ragnarsdrápa is a skaldic poem composed in honour of the Scandinavian hero Ragnar Lodbrok. It is attributed to the oldest known skald Bragi Boddason who lived in the 9th century, and composed for the Swedish king Björn at Haugi. Bragi describes the images on a decorated shield which Ragnar had...
tell a legend of how Gylfi was seduced by the goddess Gefjon to give her as much land as she could plow in one night. Gefjon transformed her four sons into oxen and took enough land to create the Danish
Denmark
Denmark is a Scandinavian country in Northern Europe. The countries of Denmark and Greenland, as well as the Faroe Islands, constitute the Kingdom of Denmark . It is the southernmost of the Nordic countries, southwest of Sweden and south of Norway, and bordered to the south by Germany. Denmark...
island of Zealand, leaving the Swedish lake Mälaren
Mälaren
Lake Mälaren is the third-largest lake in Sweden, after Lakes Vänern and Vättern. Its area is 1,140 km² and its greatest depth is 64 m. Mälaren spans 120 kilometers from east to west...
. 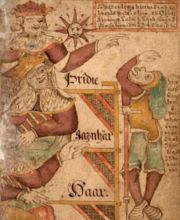 Gylfaginning
Gylfaginning
Gylfaginning, or the Tricking of Gylfi , is the first part of Snorri Sturluson's Prose Edda after Prologue. The Gylfaginning deals with the creation and destruction of the world of the Norse gods, and many other aspects of Norse mythology...
in the Prose Edda
Prose Edda
The Prose Edda, also known as the Younger Edda, Snorri's Edda or simply Edda, is an Icelandic collection of four sections interspersed with excerpts from earlier skaldic and Eddic poetry containing tales from Nordic mythology...
and the Ynglinga saga tell how the supposedly historic Odin
Odin
Odin is a major god in Norse mythology and the ruler of Asgard. Homologous with the Anglo-Saxon "Wōden" and the Old High German "Wotan", the name is descended from Proto-Germanic "*Wodanaz" or "*Wōđanaz"....
and his people the Æsir
Æsir
In Old Norse, áss is the term denoting a member of the principal pantheon in Norse paganism. This pantheon includes Odin, Frigg, Thor, Baldr and Tyr. The second pantheon comprises the Vanir...
and Vanir
Vanir
In Norse mythology, the Vanir are a group of gods associated with fertility, wisdom and the ability to see the future. The Vanir are one of two groups of gods and are the namesake of the location Vanaheimr . After the Æsir–Vanir War, the Vanir became a subgroup of the Æsir...
, who later became the Swedes, obtained new land where they built the settlement of Old Sigtuna. Gylfi and the remaining older bronze-age inhabitants adapted the religion promulgated by the Æsir. Snorri presents an outline of Norse mythology
Norse mythology
Norse mythology, a subset of Germanic mythology, is the overall term for the myths, legends and beliefs about supernatural beings of Norse pagans. It flourished prior to the Christianization of Scandinavia, during the Early Middle Ages, and passed into Nordic folklore, with some aspects surviving...
through a dialogue between Gylfi and three rulers of the Æsir. In Snorri's account Gylfi is deluded by the Æsir into accepting their supposed religious beliefs, hence the name Gylfaginning 'Deluding of Gylfi'.

It is possible that Snorri's account is based on an old tradition tracing particular beliefs or foundations of particular cults to this legendary Gylfi.

In one version of Hervarar saga
Hervarar saga
Hervarar saga ok Heiðreks is a legendary saga from the 13th century combining matter from several older sagas. It is a valuable saga for several different reasons beside its literary qualities. It contains traditions of wars between Goths and Huns, from the 4th century, and the last part is used as...
, king Gylfi married his daughter Heiðr to Sigrlami, the king of Garðaríki
Garðaríki
Garðaríki or Garðaveldi is the Old Norse term used in medieval times for the states of Kievan Rus'...
(Russia). Heiðr and Sigrlami had the son Svafrlami who forced the two dwarves Dvalin and Durin
Durin (Norse mythology)
In Norse mythology, Durinn is the name of a dwarf attested in the Poetic Edda poem Völuspá and repeated in Gylfaginning from the Prose Edda. He was the second created after the first and foremost dwarf Mótsognir. He is also attested in Hervarar saga, where he forged the magic sword Tyrfing with the...
to forge the magic sword Tyrfing
Tyrfing
Tyrfing or Tirfing was a magic sword in Norse mythology, which figures in a poem from the Poetic Edda called Hervararkviða, and in Hervarar saga...
.