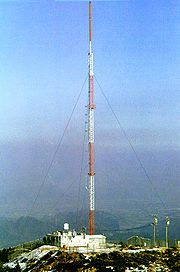 A guyed mast is a tall thin vertical structure
Structure
Structure is a fundamental, tangible or intangible notion referring to the recognition, observation, nature, and permanence of patterns and relationships of entities. This notion may itself be an object, such as a built structure, or an attribute, such as the structure of society...
that receives support from guy lines.

Guyed masts are frequently used for radio masts
Radio masts and towers
Radio masts and towers are, typically, tall structures designed to support antennas for telecommunications and broadcasting, including television. They are among the tallest man-made structures...
. The mast can either support aerials
Antenna (radio)
An antenna is an electrical device which converts electric currents into radio waves, and vice versa. It is usually used with a radio transmitter or radio receiver...
(for VHF and UHF
Ultra high frequency
Ultra-High Frequency designates the ITU Radio frequency range of electromagnetic waves between 300 MHz and 3 GHz , also known as the decimetre band or decimetre wave as the wavelengths range from one to ten decimetres...
) mounted at its top, or the entire structure itself can function as an antenna (for VLF, LF
Lf
Lf or LF may stand for:* FlyNordic IATA airline designator* Nippon Broadcasting System, a radio station in Tokyo, Japan - JOLF* Lactoferrin, a protein* Laissez-faire* LeapFrog, an educational toy company...
, MF
Medium frequency
Medium frequency refers to radio frequencies in the range of 300 kHz to 3 MHz. Part of this band is the medium wave AM broadcast band. The MF band is also known as the hectometer band or hectometer wave as the wavelengths range from ten down to one hectometers...
and HF
High frequency
High frequency radio frequencies are between 3 and 30 MHz. Also known as the decameter band or decameter wave as the wavelengths range from one to ten decameters . Frequencies immediately below HF are denoted Medium-frequency , and the next higher frequencies are known as Very high frequency...
); this is called a mast radiator
Mast radiator
A mast radiator is a radio mast or tower in which the whole structure itself functions as an antenna. This design is commonly used for transmitting antennas operating at low frequencies, in the VLF, LF and MF ranges, in particular those used for AM broadcasting. The metal mast is electrically...
. In the latter case, the mast needs to be insulated from the ground
Ground (electricity)
In electrical engineering, ground or earth may be the reference point in an electrical circuit from which other voltages are measured, or a common return path for electric current, or a direct physical connection to the Earth....
. They can also be used to support all types of wire aerials (for VLF, LF, MF and HF).

Sailing masts
Mast (sailing)
The mast of a sailing vessel is a tall, vertical, or near vertical, spar, or arrangement of spars, which supports the sails. Large ships have several masts, with the size and configuration depending on the style of ship...
, the masts that support the sails on sailboat
Sailboat
A sailboat or sailing boat is a boat propelled partly or entirely by sails. The term covers a variety of boats, larger than small vessels such as sailboards and smaller than sailing ships, but distinctions in the size are not strictly defined and what constitutes a sailing ship, sailboat, or a...
s, are very typically guyed masts.

Guyed masts can also be used as the tops of free standing towers. A famous tower of this type is the Gerbrandy Toren.

Guyed masts are sometimes also used for meteorological measurements at certain heights above ground level. Sometimes they are used as pylon
Electricity pylon
A transmission tower is a tall structure, usually a steel lattice tower, used to support an overhead power line. They are used in high-voltage AC and DC systems, and come in a wide variety of shapes and sizes...
s, although their usage in agricultural areas is problematic because anchor foundations handicaps ploughing. A very special use is the BREN Tower
BREN Tower
BREN Tower is a guyed steel framework mast, high, on the Nevada Test Site in Nevada, USA. "BREN" stands for "Bare Reactor Experiment, Nevada."...
.

Craning is the act of climbing cranes and include guyed masts. Apart from the danger of falling, microwave radiation from the antennas is an often overlooked danger.
The source of this article is wikipedia, the free encyclopedia.  The text of this article is licensed under the GFDL.