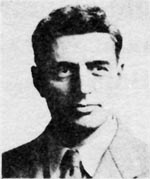 Guy Murchie (25 January 1907 - 8 July 1997), the son of Ethel A. and Guy Murchie Sr., was a Chicago Tribune
Chicago Tribune
The Chicago Tribune is a major daily newspaper based in Chicago, Illinois, and the flagship publication of the Tribune Company. Formerly self-styled as the "World's Greatest Newspaper" , it remains the most read daily newspaper of the Chicago metropolitan area and the Great Lakes region and is...
photographer, staff artist and reporter, who had served as a war correspondent
War correspondent
A war correspondent is a journalist who covers stories firsthand from a war zone. In the 19th century they were also called Special Correspondents.-Methods:...
in England and Iceland
Iceland
Iceland , described as the Republic of Iceland, is a Nordic and European island country in the North Atlantic Ocean, on the Mid-Atlantic Ridge. Iceland also refers to the main island of the country, which contains almost all the population and almost all the land area. The country has a population...
from 1940 to 1942. He was briefly married to Barbara Cooney
Barbara Cooney
Barbara Cooney was an American children's author and illustrator of more than 200 books and double Caldecott Medalist. She has written books for six decades...
(1944–1947), with whom he shared two children (Gretel and Barnaby). He was a flight instructor
Flight instructor
A flight instructor is a person who teaches others to fly aircraft. Specific privileges granted to holders of a flight instructor qualification vary from country to country, but very generally, a flight instructor serves to enhance or evaluate the knowledge and skill level of an aviator in pursuit...
and a practising member of the Bahá'í Faith
Bahá'í Faith
The Bahá'í Faith is a monotheistic religion founded by Bahá'u'lláh in 19th-century Persia, emphasizing the spiritual unity of all humankind. There are an estimated five to six million Bahá'ís around the world in more than 200 countries and territories....
. His books included Men on the Horizon (1932), Song of the Sky (1954), Music of the Spheres (1961), and The Seven Mysteries of Life (1978). Murchie also illustrated his books with etching
Etching
Etching is the process of using strong acid or mordant to cut into the unprotected parts of a metal surface to create a design in intaglio in the metal...
s and woodcut
Woodcut
Woodcut—occasionally known as xylography—is a relief printing artistic technique in printmaking in which an image is carved into the surface of a block of wood, with the printing parts remaining level with the surface while the non-printing parts are removed, typically with gouges...
s of his own design. The American Museum of Natural History
American Museum of Natural History
The American Museum of Natural History , located on the Upper West Side of Manhattan in New York City, United States, is one of the largest and most celebrated museums in the world...
awarded him the John Burroughs Medal
John Burroughs Medal
The John Burroughs Medal, named for nature writer John Burroughs , is awarded each year in April by the John Burroughs Association to the author of a book that the association has judged to be distinguished in the field of natural history....
in 1956 for Song of the Sky.


The Seven Mysteries of Life

In his The Seven Mysteries of Life all knowledge is organized around seven philosophical principles - ideas like transcendence
Transcendence (philosophy)
In philosophy, the adjective transcendental and the noun transcendence convey the basic ground concept from the word's literal meaning , of climbing or going beyond, albeit with varying connotations in its different historical and cultural stages...
and vitality, "In some sense, I have little doubt, that genes know what they are doing, for they are memory incarnate, letters of living purpose, the script of life in a material universe." "When you look at a planet whole, from outside, for the first time, certain things come clear that you never could be quite sure of before. One is a persistent feeling that all the inhabitants of that world must be related." Murchie invited those who saw themselves as spiritual or religious to appreciate the wondrous complexities of nature with the same sensibility that they used to celebrate their deities.

His observations included that there are degrees of sex, rather than just the two opposite extremes. Going beyond the acknowledged traditional five senses, he observed up to a total of 32 other senses exist, including the sense of time and the sense of fear.

However, one of his greatest contributions was in the concept of the superorganism
Superorganism
A superorganism is an organism consisting of many organisms. This is usually meant to be a social unit of eusocial animals, where division of labour is highly specialised and where individuals are not able to survive by themselves for extended periods of time. Ants are the best-known example of...
. Murchie notes that often groups behave as an individual organism. He asks "Who runs an ant colony?" "How do ants decide to move their nest somewhere else?" Similarly, bees of a beehive communicate (at least as far as directing their fellow bees to food) with a language which is made of dance steps (including sounds and smells). The ant colony and the beehive behave like a single organism with its own mind: a beehive metabolizes, has a cognitive life (makes decisions), acts (it can move, attack) and so forth. In this scenario, language can be viewed from a different perspective, as the mechanism that allows the organism to be one. Where does language come from is a question that does not only apply to humans, but to all species, each species having its own "language". Murchie further envisioned the earth as a single organism. On his view, all living organisms, along with all the minerals on the surface of the Earth, compose one giant integrated system that controls its behavior so as to survive as a whole. Galaxies can be viewed analogously. After all, living beings are made of star dust. Life is inherent in nature. To this effect, Murchie describes sophisticated geologic phenomena such as sand dunes, glaciers, fires, etc. as living organisms, as well as the life of metals and crystals. The question is not whether there is life outside our planet, but whether it is possible to have "nonlife".

Murchie also expounded on the properties of mind. He states that memory
Memory
In psychology, memory is an organism's ability to store, retain, and recall information and experiences. Traditional studies of memory began in the fields of philosophy, including techniques of artificially enhancing memory....
is ubiquitous in nature. For example, energy conservation
Energy conservation
Energy conservation refers to efforts made to reduce energy consumption. Energy conservation can be achieved through increased efficient energy use, in conjunction with decreased energy consumption and/or reduced consumption from conventional energy sources...
is a form of memory (an elastic band remembers how much energy was put into stretching it and eventually goes back to the original position). Thus, mind
Mind
The concept of mind is understood in many different ways by many different traditions, ranging from panpsychism and animism to traditional and organized religious views, as well as secular and materialist philosophies. Most agree that minds are constituted by conscious experience and intelligent...
in this sense is a universal aspect of life and energy. Murchie believed that there is one huge mind, the "thinking layer" around the Earth, which corresponds to the noosphere
Noosphere
Noosphere , according to the thought of Vladimir Vernadsky and Teilhard de Chardin, denotes the "sphere of human thought". The word is derived from the Greek νοῦς + σφαῖρα , in lexical analogy to "atmosphere" and "biosphere". Introduced by Pierre Teilhard de Chardin 1922 in his Cosmogenesis"...
. Individual consciousnesses are absorbed into the superconsciousness of a social group, which is part of a superconsciousness of the world
Collective unconscious
Collective unconscious is a term of analytical psychology, coined by Carl Jung. It is proposed to be a part of the unconscious mind, expressed in humanity and all life forms with nervous systems, and describes how the structure of the psyche autonomously organizes experience...
. In Murchie's opinion, the world has a soul, analogous to Pythagoreans
Pythagoreanism
Pythagoreanism was the system of esoteric and metaphysical beliefs held by Pythagoras and his followers, the Pythagoreans, who were considerably influenced by mathematics. Pythagoreanism originated in the 5th century BCE and greatly influenced Platonism...
' "anima mundi
Anima mundi (spirit)
The world soul is, according to several systems of thought, an intrinsic connection between all living things on the planet, which relates to our world in much the same way as the soul is connected to the human body...
" and to the Hindu
Hindu
Hindu refers to an identity associated with the philosophical, religious and cultural systems that are indigenous to the Indian subcontinent. As used in the Constitution of India, the word "Hindu" is also attributed to all persons professing any Indian religion...
concept that Atman
Atman (Hinduism)
Ātman is a Sanskrit word that means 'self'. In Hindu philosophy, especially in the Vedanta school of Hinduism it refers to one's true self beyond identification with phenomena...
equals Brahman
Brahman
In Hinduism, Brahman is the one supreme, universal Spirit that is the origin and support of the phenomenal universe. Brahman is sometimes referred to as the Absolute or Godhead which is the Divine Ground of all being...
.

Murchie further speculated on the origin of death. Death is an evolutionary advantage: immortal beings that did not change would be easy prey to environmental changes. Death allows for regeneration and for the creation of new species. Death is a tool for change and progress.