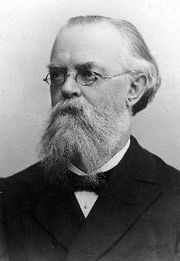 Gustav Anton Zeuner was a German
Germany
Germany , officially the Federal Republic of Germany , is a federal parliamentary republic in Europe. The country consists of 16 states while the capital and largest city is Berlin. Germany covers an area of 357,021 km2 and has a largely temperate seasonal climate...
physicist
Physicist
A physicist is a scientist who studies or practices physics. Physicists study a wide range of physical phenomena in many branches of physics spanning all length scales: from sub-atomic particles of which all ordinary matter is made to the behavior of the material Universe as a whole...
, engineer
Engineer
An engineer is a professional practitioner of engineering, concerned with applying scientific knowledge, mathematics and ingenuity to develop solutions for technical problems. Engineers design materials, structures, machines and systems while considering the limitations imposed by practicality,...
and epistemologist, considered the founder of technical thermodynamics
Thermodynamics
Thermodynamics is a physical science that studies the effects on material bodies, and on radiation in regions of space, of transfer of heat and of work done on or by the bodies or radiation...
and of the Dresden School of Thermodynamics.

In 1848 he moved the short distance to the Bergakademie (Mining Academy) in Freiberg
Freiberg, Saxony
Freiberg is a city in the Free State of Saxony, Germany, administrative center of the Mittelsachsen district.-History:The city was founded in 1186, and has been a center of the mining industry in the Ore Mountains for centuries...
, today also a university of technology, where he studied mining and metallurgy. He developed close links with one of his professors, the famous mineralogist Albin Julius Weisbach, with whom he worked on several projects.

The university course was disrupted, however, during the revolutions
Revolutions of 1848 in the German states
The Revolutions of 1848 in the German states, also called the March Revolution – part of the Revolutions of 1848 that broke out in many countries of Europe – were a series of loosely coordinated protests and rebellions in the states of the German Confederation, including the Austrian Empire...
which took place all over Germany. Large popular assemblies and mass demonstrations took place, primarily demanding freedom of the press, freedom of assembly, arming of the people, and a national German parliament. Zeuner joined the revolutionaries on the barricades in Dresden
Dresden
Dresden is the capital city of the Free State of Saxony in Germany. It is situated in a valley on the River Elbe, near the Czech border. The Dresden conurbation is part of the Saxon Triangle metropolitan area....
during the May Uprising
May Uprising in Dresden
The May Uprising took place in Dresden, Germany in 1849; it was one of the last of the series of events known as the Revolutions of 1848.-Events leading to the May Uprising:...
in 1849. Unlike many of his compatriots, some of whom were sentenced to death or sent to the workhouse, Zeuner was pardoned. He was able to complete his course, and even completed his PhD at the University of Leipzig
University of Leipzig
The University of Leipzig , located in Leipzig in the Free State of Saxony, Germany, is one of the oldest universities in the world and the second-oldest university in Germany...
in 1853, but was banned from ever teaching at any Saxon university.

In 1853, Zeuner took over as the editor of the engineering magazine "Der Civilenginieur. Zeitschrift für das Ingenieurwesen", the first German magazine specialising in mechanics, which ran until 1896. He continued in this position until 1857, even after moving to Zürich in 1855 to work as a professor for technical mechanics at the ETH Zürich
ETH Zurich
The Swiss Federal Institute of Technology Zurich or ETH Zürich is an engineering, science, technology, mathematics and management university in the City of Zurich, Switzerland....
, the Swiss Federal Institute of Technology in Zürich
Zürich
Zurich is the largest city in Switzerland and the capital of the canton of Zurich. It is located in central Switzerland at the northwestern tip of Lake Zurich...
. There he worked alongside famous engineers such as Franz Reuleaux
Franz Reuleaux
Franz Reuleaux , was a mechanical engineer and a lecturer of the Berlin Royal Technical Academy, later appointed as the President of the Academy. He was often called the father of kinematics...
. Other Dresden revolutionaries had fled their home country for Zürich (Richard Wagner
Richard Wagner
Wilhelm Richard Wagner was a German composer, conductor, theatre director, philosopher, music theorist, poet, essayist and writer primarily known for his operas...
, Gottfried Semper
Gottfried Semper
Gottfried Semper was a German architect, art critic, and professor of architecture, who designed and built the Semper Opera House in Dresden between 1838 and 1841. In 1849 he took part in the May Uprising in Dresden and was put on the government's wanted list. Semper fled first to Zürich and later...
, Theodor Mommsen
Theodor Mommsen
Christian Matthias Theodor Mommsen was a German classical scholar, historian, jurist, journalist, politician, archaeologist, and writer generally regarded as the greatest classicist of the 19th century. His work regarding Roman history is still of fundamental importance for contemporary research...
).

It was in Zürich that Zeuner made his model of a locomotive front end in 1858; he recognised its potential for creating momentum but was only interested in the theory and did not develop the design any further. Also in Zürich (in 1869) Zeuner invented the three-dimensional population graph now sometimes known as a Zeuner diagram but more often as a Lexis diagram
Lexis diagram
In demography a Lexis diagram is a two dimensional diagram that is used to represent events that occur to individuals belonging to different cohorts...
after Wilhelm Lexis
Wilhelm Lexis
Wilhelm Lexis was an eminent German statistician, economist, and social scientist and a founder of the interdisciplinary study of insurance....
who modified the idea slightly.

From 1859 Zeuner worked the stand-in director of the ETH Zürich, and in May 1865 he took over the position officially. His former professor, Albin Weisbach, commemorated his friend's acquisition of the post by naming a mineral after him - the transparent green crystal Zeunerite
Zeunerite
Zeunerite is a green copper uranium arsenate mineral with formula Cu22•10-16. It is a member of the autunite group. Metazeunerite is a dehydration product....
.

In 1871 Zeuner returned to Germany and was once again able to work with Weisbach when he succeeded his old friend as director of the Freiberg Mining Academy. He also taught there until 1875 as a professor of mechanics and the study of mining machinery. This was now possible, despite the teaching ban which had been placed on him, because of the amnesty granted to all the revolutionaries in 1862.

In 1873, while still director of Freiberg
Freiberg, Saxony
Freiberg is a city in the Free State of Saxony, Germany, administrative center of the Mittelsachsen district.-History:The city was founded in 1186, and has been a center of the mining industry in the Ore Mountains for centuries...
Mining Academy, Zeuner also took on the post of director at the Royal Saxon Polytechnicum in Dresden (now Technische Universität Dresden). Zeuner's efforts there led to the introduction of the humanities; the extension of the range of subjects taught resulted in the polytechnic's rise to a full-scale polytechnic university in 1890.

In 1889, aged 61, Zeuner gave up his position as director of the polytechnic to work as a lecturer until his retirement in 1897. On retiring he was made an emeritus professor. Zeuner died in Dresden
Dresden
Dresden is the capital city of the Free State of Saxony in Germany. It is situated in a valley on the River Elbe, near the Czech border. The Dresden conurbation is part of the Saxon Triangle metropolitan area....
in 1907.