Encyclopedia
Gunung Mulu National Park near Miri
Miri
Miri is a city in northern Sarawak, Malaysia, on the island of Borneo. It is the second largest city in Sarawak, with a population of about 300,000, and the government administrative centre of Miri District in Miri Division....
, Sarawak
Sarawak
Sarawak is one of two Malaysian states on the island of Borneo. Known as Bumi Kenyalang , Sarawak is situated on the north-west of the island. It is the largest state in Malaysia followed by Sabah, the second largest state located to the North- East.The administrative capital is Kuching, which...
, Malaysian Borneo
Borneo
Borneo is the third largest island in the world and is located north of Java Island, Indonesia, at the geographic centre of Maritime Southeast Asia....
, is a UNESCO World Heritage Site that encompasses incredible cave
Cave
A cave or cavern is a natural underground space large enough for a human to enter. The term applies to natural cavities some part of which is in total darkness. The word cave also includes smaller spaces like rock shelters, sea caves, and grottos.Speleology is the science of exploration and study...
s and karst formations
Karst topography
Karst topography is a geologic formation shaped by the dissolution of a layer or layers of soluble bedrock, usually carbonate rock such as limestone or dolomite, but has also been documented for weathering resistant rocks like quartzite given the right conditions.Due to subterranean drainage, there...
in a mountain
Mountain
Image:Himalaya_annotated.jpg|thumb|right|The Himalayan mountain range with Mount Everestrect 58 14 160 49 Chomo Lonzorect 200 28 335 52 Makalurect 378 24 566 45 Mount Everestrect 188 581 920 656 Tibetan Plateaurect 250 406 340 427 Rong River...
ous equator
Equator
An equator is the intersection of a sphere's surface with the plane perpendicular to the sphere's axis of rotation and containing the sphere's center of mass....
ial rainforest
Rainforest
Rainforests are forests characterized by high rainfall, with definitions based on a minimum normal annual rainfall of 1750-2000 mm...
setting. The park is famous for its caves and the expeditions that have been mounted to explore them and their surrounding rainforest, most notably the Royal Geographical Society
Royal Geographical Society
The Royal Geographical Society is a British learned society founded in 1830 for the advancement of geographical sciences...
Expedition of 1977–1978, which saw over 100 scientists in the field for 15 months. This initiated a series of over 20 expeditions now drawn together as the Mulu Caves Project

The national park is named after Mount Mulu
Mount Mulu
Mount Mulu is a sandstone and shale mountain. At 2376 m, it is the second highest mountain in the state of Sarawak, after Mount Murud. It is located within the boundaries of Gunung Mulu National Park, which is named after it....
, the second highest mountain in Sarawak
Sarawak
Sarawak is one of two Malaysian states on the island of Borneo. Known as Bumi Kenyalang , Sarawak is situated on the north-west of the island. It is the largest state in Malaysia followed by Sabah, the second largest state located to the North- East.The administrative capital is Kuching, which...
.

Gunung Mulu National Park is famous for its limestone karst
KARST
Kilometer-square Area Radio Synthesis Telescope is a Chinese telescope project to which FAST is a forerunner. KARST is a set of large spherical reflectors on karst landforms, which are bowlshaped limestone sinkholes named after the Kras region in Slovenia and Northern Italy. It will consist of...
formations. Features include enormous caves, vast cave networks, rock pinnacles, cliffs and gorges.

Gunung Mulu National Park has the largest known natural chamber or room - Sarawak Chamber
Sarawak chamber
The Sarawak Chamber is a huge chamber in Gua Nasib Bagus , which is located in Gunung Mulu National Park, in the Malaysian state of Sarawak on the island of Borneo. It is considered to be the largest known underground chamber in the world....
, found in Gua Nasib Bagus
Gua Nasib Bagus
Gua Nasib Bagus or Lubang Nasib Bagus is a cave located in the state of Sarawak in Malaysia. It is one of many caves found within Gunung Mulu National Park, a World Heritage Site on the island of Borneo....
. It is 2,300 feet (700 m) long, 1,300 feet (396 m) wide and at least 230 feet (70 m) high. It has been said that the chamber is so big that it could accommodate about 40 Boeing 747s, without overlapping their wings. The nearby Deer Cave was, for many years, considered the largest single cave passage in the world. 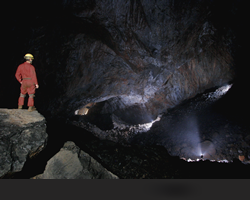 Mulu's limestones belong to the Melinau Formation and their age is between 17 and 40 million years (Late Eocene to Early Miocene).

Stratigraphically below the limestones, and forming the highest peaks in the south east sector of the Park including Gunung Mulu, lies the Mulu Formation (shales and sandstones). The age of these rocks is between 40 and 90 million years (Late Cretaceous to Late Eocene).

Twenty seven species of bat
Bat
Bats are mammals of the order Chiroptera "hand" and pteron "wing") whose forelimbs form webbed wings, making them the only mammals naturally capable of true and sustained flight. By contrast, other mammals said to fly, such as flying squirrels, gliding possums, and colugos, glide rather than fly,...
have been recorded in Mulu. Deer Cave in the southern limestone hills of the park is home to an enormous colony of Wrinkle-lipped bats (Tadarida plicata). The bats exit the cave almost every evening in search of food in a spectacular exodus. A huge mound of guano
Guano
Guano is the excrement of seabirds, cave dwelling bats, and seals. Guano manure is an effective fertilizer due to its high levels of phosphorus and nitrogen and also its lack of odor. It was an important source of nitrates for gunpowder...
in the cave is evidence of the size of the bat colony that roosts in the cave's high ceilings. 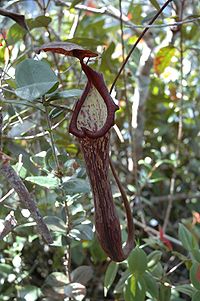 Gunung Mulu National Park contains a large number of plant species, including flowering plant
Flowering plant
The flowering plants , also known as Angiospermae or Magnoliophyta, are the most diverse group of land plants. Angiosperms are seed-producing plants like the gymnosperms and can be distinguished from the gymnosperms by a series of synapomorphies...
s, trees, and fungi. Geology, soil types and topography have given rise to a rich tapestry of plant zones and types. On Gunung Mulu itself these include lowland mixed dipterocarp forest, lower montane forest, mossy or upper montane forest and summit zone vegetation on the highest peaks. On the limestone
Limestone
Limestone is a sedimentary rock composed largely of the minerals calcite and aragonite, which are different crystal forms of calcium carbonate . Many limestones are composed from skeletal fragments of marine organisms such as coral or foraminifera....
s there is lowland limestone forest as well as lower and upper montane limestone forest. Other plant communities dominate the alluvial plains, including kerangas (tropical heath forest) and peatswamp forest.

Mulu National Park is a very hard to access area; the only practical way of getting to and from it is by air, mainly from Mulu
Mulu
Mulu may refer to:* Mulu , a 1990s British trip hop group* King Mulu , legendary ruler in Yunnan, China* Mulu Airport, an airport in northern Sarawak, Malaysia* Mount Mulu, a mountain in Sarawak, Malaysia* Mulu, Ethiopia-See also:...
airport and, alternatively, Miri
Miri
Miri is a city in northern Sarawak, Malaysia, on the island of Borneo. It is the second largest city in Sarawak, with a population of about 300,000, and the government administrative centre of Miri District in Miri Division....
, which is 100 km away. It is possible to travel to the area by riverboat, but it requires a chartered long boat for the last part — and the whole trip by river takes around 12 hours from Miri, while the flight takes only 30 minutes. Before the opening of the airport and the opening of a helipad in 1991, this was the only way to reach the national park.

Excursions to Mulu continues to retain the sense of adventure associated with its original exploration through the provision of adventure caving and other adventure activities. The primary focus, however, has shifted to the promotion of an awareness of the significance of the park and its environment
Natural environment
The natural environment encompasses all living and non-living things occurring naturally on Earth or some region thereof. It is an environment that encompasses the interaction of all living species....
through the provision of ecotourism
Ecotourism
Ecotourism is a form of tourism visiting fragile, pristine, and usually protected areas, intended as a low impact and often small scale alternative to standard commercial tourism...
activities that foster understanding and appreciation of the parks values. Accommodation is available onsite at Gunung Mulu National Park headquarters, as well as at the Royal Mulu Resort and Benarat Inn. Homestays offered by locals, and other typically cheaper lodging are available across the river.