Gulfport is the second largest city in Mississippi
Mississippi
Mississippi is a U.S. state located in the Southern United States. Jackson is the state capital and largest city. The name of the state derives from the Mississippi River, which flows along its western boundary, whose name comes from the Ojibwe word misi-ziibi...
after the state capital Jackson
Jackson, Mississippi
Jackson is the capital and the most populous city of the US state of Mississippi. It is one of two county seats of Hinds County ,. The population of the city declined from 184,256 at the 2000 census to 173,514 at the 2010 census...
. It is the larger of the two principal cities of the Gulfport-Biloxi, Mississippi Metropolitan Statistical Area, which is included in the Gulfport-Biloxi-Pascagoula, Mississippi Combined Statistical Area. As of the 2010 census, the city of Gulfport had a total population of 67,793. Gulfport is co-county seat
County seat
A county seat is an administrative center, or seat of government, for a county or civil parish. The term is primarily used in the United States....
with Biloxi
Biloxi, Mississippi
Biloxi is a city in Harrison County, Mississippi, in the United States. The 2010 census recorded the population as 44,054. Along with Gulfport, Biloxi is a county seat of Harrison County....
of Harrison County, Mississippi
Harrison County, Mississippi
-National protected areas:* De Soto National Forest * Gulf Islands National Seashore - Demographics :As of the census of 2000, there were 189,601 people, 71,538 households, and 48,574 families residing in the county. The population density was 326 people per square mile . There were 79,636 housing...
. Gulfport is also the home to the US Navy Seabees.

From its beginnings as a lumber port, Gulfport evolved into a diversified city. With about 6.7 miles (10.7 kilometers) of white sand beaches along the Gulf of Mexico
Gulf of Mexico
The Gulf of Mexico is a partially landlocked ocean basin largely surrounded by the North American continent and the island of Cuba. It is bounded on the northeast, north and northwest by the Gulf Coast of the United States, on the southwest and south by Mexico, and on the southeast by Cuba. In...
, Gulfport has become a tourism destination, due in large part to Mississippi's Coast Casinos. Gulfport has served as host to popular cultural events such as the "World's Largest Fishing Rodeo," "Cruisin' the Coast" (a week of classic cars), and "Smokin' the Sound" (speedboat races). Gulfport is a thriving residential community with a strong mercantile center. There are historic neighborhoods and home sites, as well as diverse shopping opportunities and several motels scattered throughout to accommodate golfing, gambling, and water-sport tourism.

In 1910, the U.S. Post Office and Customhouse was built. The Gulfport Post office was listed on the National Register of Historic Places in 1984.

In December 1993, the City annexed 33 square miles (85 square kilometers) north of Gulfport making it the second largest city in Mississippi. 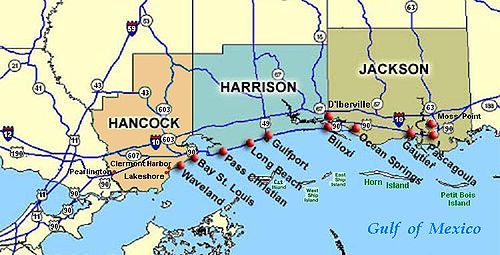 According to the census
Census
A census is the procedure of systematically acquiring and recording information about the members of a given population. It is a regularly occurring and official count of a particular population. The term is used mostly in connection with national population and housing censuses; other common...
of 2010, there were 67,793 people residing in the city. The population density
Population density
Population density is a measurement of population per unit area or unit volume. It is frequently applied to living organisms, and particularly to humans...
was 1,191.4 people per square mile (459.9/km²). The city had 50,825 or 74.97% of its population at the age of 18 and above. The racial makeup of the city was 56.86% White, 36.07% African American, 0.39% Native American, 1.69% Asian, 0.14% Pacific Islander, 2.13% from other races, and 2.73% from two or more races. Results show that 5.19% of the population was Hispanic/Latino of any race.

As of the census
Census
A census is the procedure of systematically acquiring and recording information about the members of a given population. It is a regularly occurring and official count of a particular population. The term is used mostly in connection with national population and housing censuses; other common...
of 2000, there were 26,943 households out of which 32.1% have children under the age of 18 living with them, 42.6% were married couples
Marriage
Marriage is a social union or legal contract between people that creates kinship. It is an institution in which interpersonal relationships, usually intimate and sexual, are acknowledged in a variety of ways, depending on the culture or subculture in which it is found...
living together, 18.2% had a female householder with no husband present, and 34.5% were non-families. 27.7% of all households were made up of individuals and 8.5% had someone living alone who was 65 years of age or older. The average household size was 2.51 and the average family size was 3.07.

The City
City
A city is a relatively large and permanent settlement. Although there is no agreement on how a city is distinguished from a town within general English language meanings, many cities have a particular administrative, legal, or historical status based on local law.For example, in the U.S...
of Gulfport is served by the Gulfport School District
Gulfport School District
The Gulfport School District is a public school district based in Gulfport, Mississippi .-Middle Schools:*Bayou View Middle School**2008 National Blue Ribbon School *Gulfport Central Middle School-Elementary Schools:...
and the Harrison County School District
Harrison County School District
The Harrison County School District is a public school district based in Gulfport, Mississippi .In addition to serving portions of Gulfport, the district also serves the city of D'Iberville, the communities of Lyman and Saucier, and portions of Biloxi as well as most of rural Harrison...
. Gulfport is also home to William Carey, a private Baptist
Baptist
Baptists comprise a group of Christian denominations and churches that subscribe to a doctrine that baptism should be performed only for professing believers , and that it must be done by immersion...
College
College
A college is an educational institution or a constituent part of an educational institution. Usage varies in English-speaking nations...
. Mississippi Gulf Coast Community College
Mississippi Gulf Coast Community College
Mississippi Gulf Coast Community College consists of four campuses and four centers: the main campus, located in Perkinston, Mississippi; the Jackson County Campus, in Gautier; the Jefferson Davis Campus, in Gulfport; the Community Campus, a non-traditional campus without walls; the George County...
, Jefferson Davis
Jefferson Davis
Jefferson Finis Davis , also known as Jeff Davis, was an American statesman and leader of the Confederacy during the American Civil War, serving as President for its entire history. He was born in Kentucky to Samuel and Jane Davis...
Campus
Campus
A campus is traditionally the land on which a college or university and related institutional buildings are situated. Usually a campus includes libraries, lecture halls, residence halls and park-like settings...
is also located in Gulfport.

The Gulfport Police Department has 201 sworn personnel and 92 civilian staff to serve the city.

The U.S. Coast Guard operates 7 boats out of the port of Gulfport 2 of which are Patrol Boats. The Gulfport station has 110 members which include Active, Reserve and Coast Guard Auxiliary.

Gulfport's local newspaper is The Sun Herald
The Sun Herald
The Sun Herald is a U.S. newspaper based in Biloxi, Mississippi, that serves readers along the Mississippi Gulf Coast. It is owned by The McClatchy Company, one of the largest newspaper publishers in the United States....
. It is also served by two television stations, the ABC
American Broadcasting Company
The American Broadcasting Company is an American commercial broadcasting television network. Created in 1943 from the former NBC Blue radio network, ABC is owned by The Walt Disney Company and is part of Disney-ABC Television Group. Its first broadcast on television was in 1948...
affiliate WLOX
WLOX
WLOX, virtual channel 13 , is the ABC affiliate for Biloxi and the Mississippi Gulf Coast. Its transmitter is located near the unincorporated town of McHenry, Mississippi...
, the Fox
Fox Broadcasting Company
Fox Broadcasting Company, commonly referred to as Fox Network or simply Fox , is an American commercial broadcasting television network owned by Fox Entertainment Group, part of Rupert Murdoch's News Corporation. Launched on October 9, 1986, Fox was the highest-rated broadcast network in the...
affiliate WXXV, and WXXV Digital signal on Channel 25.2 mynetworktv
MyNetworkTV
MyNetworkTV is a television broadcast syndication service in the United States, owned by the Fox Entertainment Group, a division of News Corporation...
affiliate. There are also seven radio stations in the Gulfport area.

The Sun Herald
The Sun Herald
The Sun Herald is a U.S. newspaper based in Biloxi, Mississippi, that serves readers along the Mississippi Gulf Coast. It is owned by The McClatchy Company, one of the largest newspaper publishers in the United States....
newspaper in Biloxi-Gulfport, under the executive editor Stanley R. Tiner
Stanley R. Tiner
Stanley Ray Tiner has since May 2000 been the executive editor and vice president of The Sun Herald newspaper in Biloxi-Gulfport, Mississippi. He previously served briefly as the executive editor of The Daily Oklahoman in Oklahoma City and as editor of the Press-Register in Mobile, Alabama...
, won the 2006 Pulitzer Prize
Pulitzer Prize
The Pulitzer Prize is a U.S. award for achievements in newspaper and online journalism, literature and musical composition. It was established by American publisher Joseph Pulitzer and is administered by Columbia University in New York City...
in journalism for its Katrina coverage.


Notable residents (past and present)