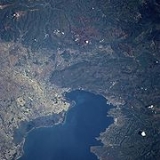 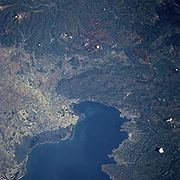 The Gulf of Trieste is a shallow bay of the Adriatic Sea
Adriatic Sea
The Adriatic Sea is a body of water separating the Italian Peninsula from the Balkan peninsula, and the system of the Apennine Mountains from that of the Dinaric Alps and adjacent ranges...
, in the extreme northern part of the Mediterranean Sea
Mediterranean Sea
The Mediterranean Sea is a sea connected to the Atlantic Ocean surrounded by the Mediterranean region and almost completely enclosed by land: on the north by Anatolia and Europe, on the south by North Africa, and on the east by the Levant...
. It is part of the Gulf of Venice
Gulf of Venice
The Gulf of Venice is a gulf that borders modern day Italy, Slovenia and Croatia, and is at the far north of the Adriatic Sea between the delta of the Po river in northern Italy and the Istria peninsula in Croatia.- Geography :...
and is shared by Italy
Italy
Italy , officially the Italian Republic languages]] under the European Charter for Regional or Minority Languages. In each of these, Italy's official name is as follows:;;;;;;;;), is a unitary parliamentary republic in South-Central Europe. To the north it borders France, Switzerland, Austria and...
, Slovenia
Slovenia
Slovenia , officially the Republic of Slovenia , is a country in Central and Southeastern Europe touching the Alps and bordering the Mediterranean. Slovenia borders Italy to the west, Croatia to the south and east, Hungary to the northeast, and Austria to the north, and also has a small portion of...
and Croatia
Croatia
Croatia , officially the Republic of Croatia , is a unitary democratic parliamentary republic in Europe at the crossroads of the Mitteleuropa, the Balkans, and the Mediterranean. Its capital and largest city is Zagreb. The country is divided into 20 counties and the city of Zagreb. Croatia covers ...
. It is closed to the south by the peninsula of Istria
Istria
Istria , formerly Histria , is the largest peninsula in the Adriatic Sea. The peninsula is located at the head of the Adriatic between the Gulf of Trieste and the Bay of Kvarner...
, the largest peninsula in the Adriatic Sea, shared between Croatia and Slovenia.

The gulf is limited by an imaginary line connecting the Punta Tagliamento on the Italian and Savudrija
Savudrija
Savudrija is a coastal settlement in northwestern Istria, Croatia. It has developed from a fishing village into a pleasant holiday centre. Savudrija is also the name of the surrounding area in the peninsula....
(Punta Salvore) on the Croatian coast. Its area is approximately 550 km², its average depth 16 m, and its maximum depth 37 m. With the exception of flat islets blocking the entrance to Laguna di Grado, there are no islands in the gulf. Its eastern coasts, with Trieste
Trieste
Trieste is a city and seaport in northeastern Italy. It is situated towards the end of a narrow strip of land lying between the Adriatic Sea and Italy's border with Slovenia, which lies almost immediately south and east of the city...
and the Slovenian Littoral
Slovenian Littoral
The Slovenian Littoral is a historical region of Slovenia. Its name recalls the historical Habsburg crown land of the Austrian Littoral, of which the Slovenian Littoral was a part....
, have more rugged relief.

The sea current in the gulf flows counterclockwise. Its average speed is 0.8 knots. Tides in the gulf are among the largest in the Adriatic Sea, but nevertheless do not usually exceed 60 centimetres (23.6 in). The average salinity
Salinity
Salinity is the saltiness or dissolved salt content of a body of water. It is a general term used to describe the levels of different salts such as sodium chloride, magnesium and calcium sulfates, and bicarbonates...
is 37-38‰, but in the summer it falls under 35‰.

Its most prominent features are:

The entire Slovenian coastline
Slovenian Riviera
Slovenian Riviera is the coastline of Slovenia, located on the Gulf of Trieste, by the Adriatic Sea. It is part of the Istrian peninsula and is 46,6 km long.-Overview:...
is located on the Gulf of Trieste. Its length is 46.6 km. Towns along the coastline include (from east to west) Koper, Izola
Izola
Izola is an old fishing city and a municipality in southwestern Slovenia on the Adriatic coast of the Istrian peninsula. Its name originates from the Italian Isola, which means island.- History :...
, and Piran
Piran
Piran is a city and municipality in southwestern Slovenia on the Gulf of Piran on the Adriatic Sea. It is one of the three major towns of Slovenian Istria. The city resembles a large open-air museum, with medieval architecture and a rich cultural heritage. Narrow streets and compact houses give...
.