Encyclopedia
Izola is an old fishing city
City
A city is a relatively large and permanent settlement. Although there is no agreement on how a city is distinguished from a town within general English language meanings, many cities have a particular administrative, legal, or historical status based on local law.For example, in the U.S...
and a municipality
Municipality
A municipality is essentially an urban administrative division having corporate status and usually powers of self-government. It can also be used to mean the governing body of a municipality. A municipality is a general-purpose administrative subdivision, as opposed to a special-purpose district...
in southwestern Slovenia
Slovenia
Slovenia , officially the Republic of Slovenia , is a country in Central and Southeastern Europe touching the Alps and bordering the Mediterranean. Slovenia borders Italy to the west, Croatia to the south and east, Hungary to the northeast, and Austria to the north, and also has a small portion of...
on the Adriatic
Adriatic Sea
The Adriatic Sea is a body of water separating the Italian Peninsula from the Balkan peninsula, and the system of the Apennine Mountains from that of the Dinaric Alps and adjacent ranges...
coast of the Istrian peninsula
Slovenian Istria
Slovenian Istria often called Obala in Slovene is a region in southwest of Slovenia. It comprises the northern part of the Istrian peninsula, and it is part of the wider geographical-historical region known as the Slovenian Littoral . Its largest urban center is Koper. Other larger settlements...
. Its name originates from the Italian
Italian language
Italian is a Romance language spoken mainly in Europe: Italy, Switzerland, San Marino, Vatican City, by minorities in Malta, Monaco, Croatia, Slovenia, France, Libya, Eritrea, and Somalia, and by immigrant communities in the Americas and Australia...
Isola, which means island. 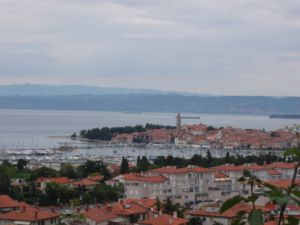 In 1820, a thermal spring was discovered in Izola, leading to the town's earliest forms of tourism. Between 1902 and 1935 the Parenzana
Parenzana
The Parenzana or Porečanka is one of the nicknames of a defunct narrow gauge railway between Trieste and Poreč , in present day Italy, Slovenia and Croatia.- Name :When constructed, the railway's official...
, a narrow-gauge railway line connected the town to Trieste
Trieste
Trieste is a city and seaport in northeastern Italy. It is situated towards the end of a narrow strip of land lying between the Adriatic Sea and Italy's border with Slovenia, which lies almost immediately south and east of the city...
and Poreč
Porec
Poreč is a town and municipality on the western coast of the Istrian peninsula, in Istria County, Croatia. Its major landmark is the 6th century Euphrasian Basilica, a UNESCO World Heritage Site since 1997....
(known as Parenzo until 1947). Today Izola has many hotels near the sea, a famous discothèque (Embassy of Gavioli) Ambasada Gavioli
Ambasada Gavioli
The Ambasada Gavioli is a Slovenian night club located in Izola, and named after its architect Mr. Gavioli. It has a floor space of 1,600 m2 and a capacity of 2,500 guests....
, many art galleries, summer concerts, street performances and a movie festival.

In the future an island is planned to be constructed between Izola and Koper. Also a tunnel is under construction which will connect these two cities.

The municipality has 14,549 inhabitants. There are marginally more females (7,385) than males (7,164). By mother tongue, they identify themselves as Slovenes (10,059), Croatians (1,199), Italians (620) and Serbo-Croatians
Serbo-Croatian language
Serbo-Croatian or Serbo-Croat, less commonly Bosnian/Croatian/Serbian , is a South Slavic language with multiple standards and the primary language of Serbia, Croatia, Bosnia and Herzegovina, and Montenegro...
(562) with other smaller minorities.

Slovene  10,059 (69.14%)
Croatian
Croatian language
Croatian is the collective name for the standard language and dialects spoken by Croats, principally in Croatia, Bosnia and Herzegovina, the Serbian province of Vojvodina and other neighbouring countries...
1,199 (8.24%)
Italian
Italian language
Italian is a Romance language spoken mainly in Europe: Italy, Switzerland, San Marino, Vatican City, by minorities in Malta, Monaco, Croatia, Slovenia, France, Libya, Eritrea, and Somalia, and by immigrant communities in the Americas and Australia...
620 (4.26%)
Serbo-Croatian
Serbo-Croatian language
Serbo-Croatian or Serbo-Croat, less commonly Bosnian/Croatian/Serbian , is a South Slavic language with multiple standards and the primary language of Serbia, Croatia, Bosnia and Herzegovina, and Montenegro...
562 (3.86%)
Bosnian
Bosnian language
Bosnian is a South Slavic language, spoken by Bosniaks. As a standardized form of the Shtokavian dialect, it is one of the three official languages of Bosnia and Herzegovina....
537 (3.69%)
Serbian
Serbian language
Serbian is a form of Serbo-Croatian, a South Slavic language, spoken by Serbs in Serbia, Bosnia and Herzegovina, Montenegro, Croatia and neighbouring countries....
385 (2,65%)
Macedonian
Macedonian language
Macedonian is a South Slavic language spoken as a first language by approximately 2–3 million people principally in the region of Macedonia but also in the Macedonian diaspora...
124 (0.85%)
Albanian
Albanian language
Albanian is an Indo-European language spoken by approximately 7.6 million people, primarily in Albania and Kosovo but also in other areas of the Balkans in which there is an Albanian population, including western Macedonia, southern Montenegro, southern Serbia and northwestern Greece...
93 (0.64%)
Hungarian
Hungarian language
Hungarian is a Uralic language, part of the Ugric group. With some 14 million speakers, it is one of the most widely spoken non-Indo-European languages in Europe....
19 (0.13%)
German
German language
German is a West Germanic language, related to and classified alongside English and Dutch. With an estimated 90 – 98 million native speakers, German is one of the world's major languages and is the most widely-spoken first language in the European Union....
10 (0.07%)
Others and Unknown 941 (6.47%)
Total 14,549

The municipality of Izola-Isola is officially bilingual, with both Slovene and Italian as official languages