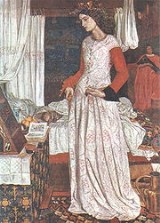 Overview
Guinevere ˈɡwɪnɨvɪər was the legendary queen consort
Queen consort
A queen consort is the wife of a reigning king. A queen consort usually shares her husband's rank and holds the feminine equivalent of the king's monarchical titles. Historically, queens consort do not share the king regnant's political and military powers. Most queens in history were queens consort...
of King Arthur
King Arthur
King Arthur is a legendary British leader of the late 5th and early 6th centuries, who, according to Medieval histories and romances, led the defence of Britain against Saxon invaders in the early 6th century. The details of Arthur's story are mainly composed of folklore and literary invention, and...
. In tales and folklore, she was said to have had a love affair with Arthur's chief knight Sir Lancelot
Lancelot
Sir Lancelot du Lac is one of the Knights of the Round Table in the Arthurian legend. He is the most trusted of King Arthur's knights and plays a part in many of Arthur's victories...
. This story first appears in Chrétien de Troyes
Chrétien de Troyes
Chrétien de Troyes was a French poet and trouvère who flourished in the late 12th century. Perhaps he named himself Christian of Troyes in contrast to the illustrious Rashi, also of Troyes...
' Lancelot, the Knight of the Cart
Lancelot, the Knight of the Cart
Lancelot, the Knight of the Cart is an Old French poem by Chrétien de Troyes. Chrétien probably composed the work at the same time as or slightly before writing Yvain, the Knight of the Lion, which refers to the action in Lancelot a number of times...
, and reappears as a common motif in numerous cyclical Arthurian literature, starting with the Lancelot-Grail
Lancelot-Grail
The Lancelot–Grail, also known as the Prose Lancelot, the Vulgate Cycle, or the Pseudo-Map Cycle, is a major source of Arthurian legend written in French. It is a series of five prose volumes that tell the story of the quest for the Holy Grail and the romance of Lancelot and Guinevere...
Cycle of the early 13th century and carrying through the Post-Vulgate Cycle and Thomas Malory
Thomas Malory
Sir Thomas Malory was an English writer, the author or compiler of Le Morte d'Arthur. The antiquary John Leland as well as John Bale believed him to be Welsh, but most modern scholars, beginning with G. L...
's Le Morte d'Arthur
Le Morte d'Arthur
Le Morte d'Arthur is a compilation by Sir Thomas Malory of Romance tales about the legendary King Arthur, Guinevere, Lancelot, and the Knights of the Round Table...
. Guinevere's and Lancelot's alleged betrayal of Arthur was often considered as having led to the downfall of the kingdom.
The Welsh
Welsh language
Welsh is a member of the Brythonic branch of the Celtic languages spoken natively in Wales, by some along the Welsh border in England, and in Y Wladfa...
form Gwenhwyfar, which seems to be cognate with the Irish name Findabair
Findabair
In Irish mythology, Findabair or Finnabair , whose name likely means "White Phantom" and is etymologically related to Gwenhwyfar, the Welsh original of Guinevere, was the daughter of Ailill and Medb of Connacht....
, can be translated as The White Enchantress, or alternately The White Fay/Ghost, from Proto-Celtic
Proto-Celtic language
The Proto-Celtic language, also called Common Celtic, is the reconstructed ancestor language of all the known Celtic languages. Its lexis can be confidently reconstructed on the basis of the comparative method of historical linguistics...
*Uindo- "white, fair, holy" + *seibarV (V=vowel) "magic" (cf.

When did Lady Guinevere Have a lover and where?
More
x