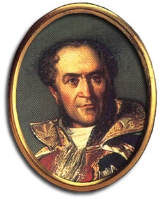 In 1796 he fought under Napoleon Bonaparte
Napoleon I of France
Napoleon Bonaparte was a French military and political leader during the latter stages of the French Revolution.As Napoleon I, he was Emperor of the French from 1804 to 1815...
in the Italian campaign
French Revolutionary Wars: Campaigns of 1796
The French Revolutionary Wars continued from 1795, with the French in an increasingly strong position as members of the First Coalition made separate peaces. Austria and Great Britain were the main remaining members of the coalition...
, and was promoted Général de Division
Général
Général is the French word for General.In France, Army generals are named after the type of unit they command. In ascending order there are two ranks :* Général de brigade : Brigade General.* Général de division : Divisional General....
for good service in the field. He commanded the French army which occupied Switzerland
Switzerland
Switzerland name of one of the Swiss cantons. ; ; ; or ), in its full name the Swiss Confederation , is a federal republic consisting of 26 cantons, with Bern as the seat of the federal authorities. The country is situated in Western Europe,Or Central Europe depending on the definition....
in 1798 and established the Helvetic Republic
Helvetic Republic
In Swiss history, the Helvetic Republic represented an early attempt to impose a central authority over Switzerland, which until then consisted mainly of self-governing cantons united by a loose military alliance, and conquered territories such as Vaud...
, and in the following year he was in command of the French troops in defence of Amsterdam
Amsterdam
Amsterdam is the largest city and the capital of the Netherlands. The current position of Amsterdam as capital city of the Kingdom of the Netherlands is governed by the constitution of August 24, 1815 and its successors. Amsterdam has a population of 783,364 within city limits, an urban population...
against the Anglo-Russian Invasion of Holland
Anglo-Russian Invasion of Holland
The Anglo-Russian invasion of Holland refers to the campaign of 27 August to 19 November 1799 during the War of the Second Coalition, in which an expeditionary force of British and Russian troops invaded the North-Holland peninsula in the Batavian Republic...
under the Duke of York
Prince Frederick, Duke of York and Albany
The Prince Frederick, Duke of York and Albany was a member of the Hanoverian and British Royal Family, the second eldest child, and second son, of King George III...
, which was completely successful - the invaders were defeated in the Battle of Castricum
Battle of Castricum
The Battle of Castricum saw a Franco-Dutch force defeat an Anglo-Russian force near Castricum, Netherlands. The battle was fought during the War of the Second Coalition against Revolutionary France between French and Dutch forces under the command of General Guillaume Brune and Herman Willem...
, and compelled, after a harsh retreat, to re-embark. He rendered further good service in Vendée
Vendée
The Vendée is a department in the Pays-de-la-Loire region in west central France, on the Atlantic Ocean. The name Vendée is taken from the Vendée river which runs through the south-eastern part of the department.-History:...
and in the Italian Peninsula
Italian Peninsula
The Italian Peninsula or Apennine Peninsula is one of the three large peninsulas of Southern Europe , spanning from the Po Valley in the north to the central Mediterranean Sea in the south. The peninsula's shape gives it the nickname Lo Stivale...
during the years 1799 - 1801 (winning the Battle of Pozzolo).

Following his coronation as Emperor of the French in 1804, Napoleon made Brune Marshal of the Empire (Maréchal d'Empire). In 1807 Brune held a command of troops fighting in the North German campaign and occupied Swedish Pomerania
Swedish Pomerania
Swedish Pomerania was a Dominion under the Swedish Crown from 1630 to 1815, situated on what is now the Baltic coast of Germany and Poland. Following the Polish War and the Thirty Years' War, Sweden held extensive control over the lands on the southern Baltic coast, including Pomerania and parts...
, but Brune's staunch republicanism and a meeting between Brune and Gustav IV Adolf of Sweden
Gustav IV Adolf of Sweden
Gustav IV Adolf of Sweden also Gustav Adolph was King of Sweden from 1792 until his abdication in 1809. He was the son of Gustav III of Sweden and his queen consort Sophia Magdalena, eldest daughter of Frederick V of Denmark and his first wife Louise of Great Britain. He was the last Swedish...
raised Napoleon's suspicions, and he was not afterwards employed during the Empire.

Brune was recalled to active service in 1815, during the Hundred Days
Hundred Days
The Hundred Days, sometimes known as the Hundred Days of Napoleon or Napoleon's Hundred Days for specificity, marked the period between Emperor Napoleon I of France's return from exile on Elba to Paris on 20 March 1815 and the second restoration of King Louis XVIII on 8 July 1815...
, and as commander of the army of the Var, he defended the south of France against the forces of the Austrian Empire
Austrian Empire
The Austrian Empire was a modern era successor empire, which was centered on what is today's Austria and which officially lasted from 1804 to 1867. It was followed by the Empire of Austria-Hungary, whose proclamation was a diplomatic move that elevated Hungary's status within the Austrian Empire...
. He was murdered by royalists
House of Bourbon
The House of Bourbon is a European royal house, a branch of the Capetian dynasty . Bourbon kings first ruled Navarre and France in the 16th century. By the 18th century, members of the Bourbon dynasty also held thrones in Spain, Naples, Sicily, and Parma...
during the White Terror at Avignon
Avignon
Avignon is a French commune in southeastern France in the départment of the Vaucluse bordered by the left bank of the Rhône river. Of the 94,787 inhabitants of the city on 1 January 2010, 12 000 live in the ancient town centre surrounded by its medieval ramparts.Often referred to as the...
, during the opening stage of the Bourbon Restoration
Bourbon Restoration
The Bourbon Restoration is the name given to the period following the successive events of the French Revolution , the end of the First Republic , and then the forcible end of the First French Empire under Napoleon  – when a coalition of European powers restored by arms the monarchy to the...
. His body was thrown in the river Rhône, but was later recovered and buried in a pyramid-shaped tomb in the cemetery of Saint-Just-Sauvage
Saint-Just-Sauvage
Saint-Just-Sauvage is a commune in the Marne department in north-eastern France.-References:*...
.