Encyclopedia
The Guča trumpet festival, also known as the Dragačevo Assembly ( or Dragačevski sabor, dragǎtʃɛv̞skiː sǎːbɔr), is an annual brass band
Brass band
A brass band is a musical ensemble generally consisting entirely of brass instruments, most often with a percussion section. Ensembles that include brass and woodwind instruments can in certain traditions also be termed brass bands , but are usually more correctly termed military bands, concert...
festival held in the town of Guča
Guca
Guča is a small town in Serbia. It is situated in the Lučani municipality, Moravica District. The population of the town is 2,022 people. Guča is a three-hour bus journey from Belgrade...
, near the city of Čačak
Cacak
Čačak is a city in central Serbia. It is the administrative center of the Moravica District of Serbia. Čačak is also the main industrial, cultural and sport center of the district...
, in the Dragačevo region of western Serbia
Serbia
Serbia , officially the Republic of Serbia , is a landlocked country located at the crossroads of Central and Southeast Europe, covering the southern part of the Carpathian basin and the central part of the Balkans...
. Guča is a three-hour bus journey from Belgrade
Belgrade
Belgrade is the capital and largest city of Serbia. It is located at the confluence of the Sava and Danube rivers, where the Pannonian Plain meets the Balkans. According to official results of Census 2011, the city has a population of 1,639,121. It is one of the 15 largest cities in Europe...
.

600,000 visitors make their way to the town of 2,000 people every year, both from Serbia and abroad. Elimination heats earlier in the year mean only a few dozen bands get to compete. Guča's official festival is split into three parts. Friday's opening concert, Saturday night celebrations and Sunday's competition. Friday's concerts are held at the entrance to the official Guča Festival building. This event features previous winners, each band getting to play three tunes while folk dancers, all kitted out in bright knitting patterns, dance kolo
Kolo (dance)
Kolo , is a collective folk dance, danced primarily by people from Bosnia and Herzegovina, Croatia, Macedonia, Montenegro, and Serbia. It is performed amongst groups of people holding each other's having their hands around each other's waists...
s and oro
Hora
Hora is a type of circle dance originating in the Balkans but also found in other countries. The name is cognate to the Greek χορός : 'dance' which is cognate with the ancient Greek art form of χορεία; see Chorea. The original meaning of the Greek word χορός may have been 'circle'...
s in front of a hyped-up audience.

An English party site, ThisIsTheLife.com, has named Guča the best festival in the world.
Said Miles Davis
Miles Davis
Miles Dewey Davis III was an American jazz musician, trumpeter, bandleader, and composer. Widely considered one of the most influential musicians of the 20th century, Miles Davis was, with his musical groups, at the forefront of several major developments in jazz music, including bebop, cool jazz,...
, a Guča Festival visitor:
The last festival took place 10 – 14 August 2011. In 2010 the organizers issued an official call to the presidents of Russia and U.S.
President of the United States
The President of the United States of America is the head of state and head of government of the United States. The president leads the executive branch of the federal government and is the commander-in-chief of the United States Armed Forces....
, Dmitry Medvedev
Dmitry Medvedev
Dmitry Anatolyevich Medvedev is the third President of the Russian Federation.Born to a family of academics, Medvedev graduated from the Law Department of Leningrad State University in 1987. He defended his dissertation in 1990 and worked as a docent at his alma mater, now renamed to Saint...
and Barack Obama
Barack Obama
Barack Hussein Obama II is the 44th and current President of the United States. He is the first African American to hold the office. Obama previously served as a United States Senator from Illinois, from January 2005 until he resigned following his victory in the 2008 presidential election.Born in...
, and Russian Prime Minister
Prime Minister of Russia
The Chairman of the Government of the Russian Federation The use of the term "Prime Minister" is strictly informal and is not allowed for by the Russian Constitution and other laws....
Vladimir Putin
Vladimir Putin
Vladimir Vladimirovich Putin served as the second President of the Russian Federation and is the current Prime Minister of Russia, as well as chairman of United Russia and Chairman of the Council of Ministers of the Union of Russia and Belarus. He became acting President on 31 December 1999, when...
, to attend the 50th anniversary event. 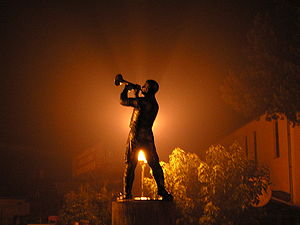 The village of Guča has gained world fame owing to its Assembly of Trumpet Players, the largest trumpet event on the planet. The love of the people of Dragačevo for music, especially for the trumpet, began in the rule of Prince Miloš Obrenović, who ordered the formation of the first military band in 1831. From then until now the trumpet has reigned here uninterrupted while woodwind instruments, in keeping with the customs, warm the soul of its population.

The sound of the trumpet traditionally accompanies every major event in Serbia's rural and small-town life: births, baptisms, weddings, Slava
Slava
The Slava , also called Krsna Slava and Krsno ime , is the Serbian Orthodox tradition of the ritual celebration and veneration of a family's own patron saint. The family celebrates the Slava annually on the patron saint's feast day...
s {family patron saint day}, farewell parties for those joining military service, state and church festivals, harvesting, reaping, and also departing this world. Appropriate music is played on these occasions, thus preserving the spirit of the existing tradition. The music is very diverse: from indigenous melodies, via kolo
Kolo (dance)
Kolo , is a collective folk dance, danced primarily by people from Bosnia and Herzegovina, Croatia, Macedonia, Montenegro, and Serbia. It is performed amongst groups of people holding each other's having their hands around each other's waists...
{a fast-rhythm chain dance}, marches and characteristic southern Serbia čoček dances, all the way to tunes that have emerged more recently, but always taking care to honor old harmonies. This music has won over the hearts of not only the local population, but has also warmed the hearts of outsiders and foreigners. In the several days of the Guča festival, hardly anyone can resist giving themselves to the adrenalin-rushing rhythms and melodies that simply force one to jump to ones feet and dance.

The traditional Dragačevo trumpet - its cult kept alive for nearly two centuries regardless of political and social considerations - has with time become world-renowned. It is owing to the trumpet that the name of Serbia has resounded worldwide, in all the continents. Some orchestras, when they appear on stage, whether for official competition national dress, the authentic and indigenous dances and other folk-inspired elements, coupled with music, have become an integral part of national gathering. The virtuoso music performers, the trumpet players to the paradox and make the story more authentic - are for the most part fully self-taught. They play by ear and quite spontaneously, relying on their musical memory; they play from the heart and soul, and their music reaches out to listeners precisely for this quality. The Guča Assembly of Trumpet Players continues to grow year after year: today, this musical feast of recognizable national skills is more popular, more diverse and bigger than ever before.

The first Dragačevo Assembly of Trumpet Players was held on October 16, 1961 in the yard of the Church of Sts. Michael and Gabriel in Guča. Initially, it was a very modest Assembly - almost subversive for the prevailing political circumstances of that time. However, the Assembly gradually grew and expanded its, one might say, magical influence, and over the past ten or so years has become the folk remained its key symbol and raison d'etre, it is no longer held solely for the trumpet players. It grew into an Assembly of toastmasters, painters, song "Sa Ovčara i Kablara", marks the beginning of the festival each year. Some church music festivals notwithstanding, the Assembly of Trumpet Players is the best know event of this kind extending uninterruptedly for 43 years and attracting guests and musicians alike from every continent. Trumpet players and folk song and dance groups from around the world deem it a great honor to be invited to the Assembly, and the number of visitors increases with each coming year.

With considerable experience in organizing Assemblies, today the traditionally hospitable Guča has earned its place on the map of world music festivals, inviting high interest from ethno music lovers, and deservedly so. As an internationally recognized trumpet capital, and a singular corner of positive energy, a place with accumulated joy, gaiety and spontaneity, coupled with the piercing yet gentle sound of the trumpet, Guča is a place of catharsis of the heart and soul while the festival lasts. All this is more than enough to attract visitors to Guča from Mexico, Spain, Greece, Denmark, China and other countries. The names of Boban Marković
Boban Markovic
Boban Marković is a Serbian Romani trumpet player and brass ensemble leader from Vladičin Han, frequently recognized as the greatest trumpet player to emerge from the Balkans...
, Ekrem Sajdić, Elvis Ajdinović, Fejat and Zoran Sejdić have carried the glory of the Serbian trumpet across the world. 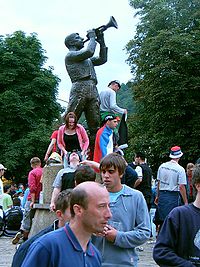