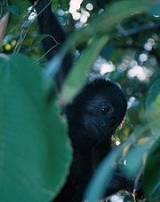 Encyclopedia
The Guatemalan black howler, or Yucatan black howler, (Alouatta pigra) is a species
Species
In biology, a species is one of the basic units of biological classification and a taxonomic rank. A species is often defined as a group of organisms capable of interbreeding and producing fertile offspring. While in many cases this definition is adequate, more precise or differing measures are...
of howler monkey
Howler monkey
Howler monkeys are among the largest of the New World monkeys. Fifteen species are currently recognised. Previously classified in the family Cebidae, they are now placed in the family Atelidae. These monkeys are native to South and Central American forests...
, a type of New World monkey
New World monkey
New World monkeys are the five families of primates that are found in Central and South America: Callitrichidae, Cebidae, Aotidae, Pitheciidae, and Atelidae. The five families are ranked together as the Platyrrhini parvorder and the Ceboidea superfamily, which are essentially synonymous since...
, from Central America
Central America
Central America is the central geographic region of the Americas. It is the southernmost, isthmian portion of the North American continent, which connects with South America on the southeast. When considered part of the unified continental model, it is considered a subcontinent...
. It is found in Belize
Belize
Belize is a constitutional monarchy and the northernmost country in Central America. Belize has a diverse society, comprising many cultures and languages. Even though Kriol and Spanish are spoken among the population, Belize is the only country in Central America where English is the official...
, Guatemala
Guatemala
Guatemala is a country in Central America bordered by Mexico to the north and west, the Pacific Ocean to the southwest, Belize to the northeast, the Caribbean to the east, and Honduras and El Salvador to the southeast...
and Mexico
Mexico
The United Mexican States , commonly known as Mexico , is a federal constitutional republic in North America. It is bordered on the north by the United States; on the south and west by the Pacific Ocean; on the southeast by Guatemala, Belize, and the Caribbean Sea; and on the east by the Gulf of...
, in and near the Yucatan Peninsula
Yucatán Peninsula
The Yucatán Peninsula, in southeastern Mexico, separates the Caribbean Sea from the Gulf of Mexico, with the northern coastline on the Yucatán Channel...
. It lives in evergreen
Evergreen forest
An temperate evergreen forest is a forest consisting entirely or mainly of evergreen trees that retain green foliage all year round. Such forests exist in the tropics primarily as broadleaf evergreens, and in temperate and boreal latitudes primarily as coniferous evergreens.-Tropical evergreen...
, semi-deciduous and lowland rain forests. It is also known as the Baboon in Belize, although it is not closely related to the baboon
Baboon
Baboons are African and Arabian Old World monkeys belonging to the genus Papio, part of the subfamily Cercopithecinae. There are five species, which are some of the largest non-hominoid members of the primate order; only the mandrill and the drill are larger...
s that live in Africa
Africa
Africa is the world's second largest and second most populous continent, after Asia. At about 30.2 million km² including adjacent islands, it covers 6% of the Earth's total surface area and 20.4% of the total land area...
.

The Guatemalan black howler is the largest of the howler monkey species and one of the largest of the New World Monkey
New World monkey
New World monkeys are the five families of primates that are found in Central and South America: Callitrichidae, Cebidae, Aotidae, Pitheciidae, and Atelidae. The five families are ranked together as the Platyrrhini parvorder and the Ceboidea superfamily, which are essentially synonymous since...
s. Guatemalan black howler males are larger than those of any other Central American monkey species. On average, males weigh 11.4 kg (25.1 lb) and females weigh 6.4 kg (14.1 lb). The body is between 521 and 639 mm (20.5 and 25.2 in) in length, excluding tail. The tail is between 590 and 690 mm (23.2 and 27.2 in) long. Adults of both sexes have long, black hair and a prehensile tail, while infants have brown fur. Males over 4 months old have a white scrotum.

The Guatemalan black howler shares several adaptations with other species of howler monkey that allow it to pursue a folivorous diet, that is a diet with a large component of leaves. Its molar
Molar (tooth)
Molars are the rearmost and most complicated kind of tooth in most mammals. In many mammals they grind food; hence the Latin name mola, "millstone"....
s have high shearing crests, to help it eat the leaves, and males have an enlarged hyoid bone near the vocal cords. This hyoid bone amplifies the male mantled howler's calls, allowing it to locate other males without expending much energy, which is important since leaves are a low-energy food. Howling occurs primarily at dawn and at dusk.

The Guatemalan black howler is diurnal and arboreal. It lives in groups that generally contain one or two adult males, with a ratio of about 1.3 females for every male. Groups generally have between two and 10 members, including juveniles, but groups as large as 16 members have been studied. The home range is between 3 and 25 hectare
Hectare
The hectare is a metric unit of area defined as 10,000 square metres , and primarily used in the measurement of land. In 1795, when the metric system was introduced, the are was defined as being 100 square metres and the hectare was thus 100 ares or 1/100 km2...
s. Population density can exceed 250 monkeys per square kilometer in the Community Baboon Sanctuary in Belize
Belize
Belize is a constitutional monarchy and the northernmost country in Central America. Belize has a diverse society, comprising many cultures and languages. Even though Kriol and Spanish are spoken among the population, Belize is the only country in Central America where English is the official...
.

The Guatemalan black howler's diet includes mostly leaves and fruit
Fruit
In broad terms, a fruit is a structure of a plant that contains its seeds.The term has different meanings dependent on context. In non-technical usage, such as food preparation, fruit normally means the fleshy seed-associated structures of certain plants that are sweet and edible in the raw state,...
. Flowers also make up a small part of the diet. The breadnut tree can provide as much as 86% of the monkey's diet during some seasons.

As with other howler monkey species, the majority of the Guatemalan black howler's day is spent resting. Eating makes up about a quarter of the day, moving about 10% of the day, and the remainder of the day is spent in socializing and other activities.

The species is considered to be endangered by the International Union for Conservation of Nature because it is believed that the species population will decline by up to 60% over the next 30 years. Threats to the species include habitat loss, hunting, and capture as pets.

The Guatemalan black howler is sympatric with the mantled howler
Mantled Howler
The mantled howler , or golden-mantled howling monkey, is a species of howler monkey, a type of New World monkey, from Central and South America. It is one of the monkey species most often seen and heard in the wild in Central America...
along the edges of its range in Mexico and Guatemala near the Yucatan Peninsula. One theory for how this sympatry occurred and why the Guatemalan black howler has such a restricted range is that the ancestors of the Guatemalan black howler and the Central American squirrel monkey
Central American Squirrel Monkey
The Central American squirrel monkey is a squirrel monkey species from the Pacific coast of Costa Rica and Panama. It is restricted to the northwestern tip of Panama near the border with Costa Rica, and the central and southern Pacific coast of Costa Rica, primarily in Manuel Antonio and Corcovado...
migrated to Central America
Central America
Central America is the central geographic region of the Americas. It is the southernmost, isthmian portion of the North American continent, which connects with South America on the southeast. When considered part of the unified continental model, it is considered a subcontinent...
from South America
South America
South America is a continent situated in the Western Hemisphere, mostly in the Southern Hemisphere, with a relatively small portion in the Northern Hemisphere. The continent is also considered a subcontinent of the Americas. It is bordered on the west by the Pacific Ocean and on the north and east...
during the late Miocene
Miocene
The Miocene is a geological epoch of the Neogene Period and extends from about . The Miocene was named by Sir Charles Lyell. Its name comes from the Greek words and and means "less recent" because it has 18% fewer modern sea invertebrates than the Pliocene. The Miocene follows the Oligocene...
or Pliocene
Pliocene
The Pliocene Epoch is the period in the geologic timescale that extends from 5.332 million to 2.588 million years before present. It is the second and youngest epoch of the Neogene Period in the Cenozoic Era. The Pliocene follows the Miocene Epoch and is followed by the Pleistocene Epoch...
. However, passage through the Isthmus
Isthmus
An isthmus is a narrow strip of land connecting two larger land areas usually with waterforms on either side.Canals are often built through isthmuses where they may be particularly advantageous to create a shortcut for marine transportation...
of Panama
Panama
Panama , officially the Republic of Panama , is the southernmost country of Central America. Situated on the isthmus connecting North and South America, it is bordered by Costa Rica to the northwest, Colombia to the southeast, the Caribbean Sea to the north and the Pacific Ocean to the south. The...
then closed for a period due to rising sea levels, and later opened up to another wave of migration about 2 million years ago. These later migrants, ancestors to modern populations of white-headed capuchin
White-headed Capuchin
The white-headed capuchin , also known as the white-faced capuchin or white-throated capuchin, is a medium-sized New World monkey of the family Cebidae, subfamily Cebinae...
s, mantled howlers and Geoffroy's spider monkey
Geoffroy's Spider Monkey
Geoffroy's spider monkey, Ateles geoffroyi, also known as black-handed spider monkey, is a species of spider monkey, a type of New World monkey, from Central America, parts of Mexico and possibly a small portion of Colombia. There are at least five subspecies. Some primatologists classify the...
s, out-competed the earlier migrants, leading to the restricted range of the Guatemalan black howler (and the Central American squirrel monkey).