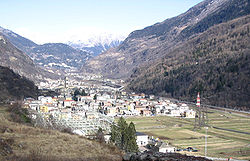 Grosio is a comune
Comune
In Italy, the comune is the basic administrative division, and may be properly approximated in casual speech by the English word township or municipality.-Importance and function:...
(municipality) in the Province of Sondrio
Province of Sondrio
The Province of Sondrio is in the Lombardy region of Italy. Its capital is the town of Sondrio.It has an area of 3,212 km², and a total population of 176,856...
in the Italian
Italy
Italy , officially the Italian Republic languages]] under the European Charter for Regional or Minority Languages. In each of these, Italy's official name is as follows:;;;;;;;;), is a unitary parliamentary republic in South-Central Europe. To the north it borders France, Switzerland, Austria and...
region Lombardy
Lombardy
Lombardy is one of the 20 regions of Italy. The capital is Milan. One-sixth of Italy's population lives in Lombardy and about one fifth of Italy's GDP is produced in this region, making it the most populous and richest region in the country and one of the richest in the whole of Europe...
, located about 130 km northeast of Milan
Milan
Milan is the second-largest city in Italy and the capital city of the region of Lombardy and of the province of Milan. The city proper has a population of about 1.3 million, while its urban area, roughly coinciding with its administrative province and the bordering Province of Monza and Brianza ,...
and about 35 km northeast of Sondrio
Sondrio
Sondrio is an Italian town and comune located in the heart of the Valtellina. Sondrio counts approximately 22,000 inhabitants and it is the administrative centre for the Lombard Province of Sondrio.- History :...
, on the border with Switzerland. As of 31 December 2004, it had a population of 4,790 and an area of 127.0 km².

The municipality of Grosio contains the frazioni
Frazione
A frazione , in Italy, is the name given in administrative law to a type of territorial subdivision of a comune; for other administrative divisions, see municipio, circoscrizione, quartiere...
(subdivisions, mainly villages and hamlets) Tiolo and Ravoledo.

On the hillside of Grosio lie the ruins of the S. Faustino and Visconti Venosta castles, the latter being mostly reconstructed and the former bearing only trace evidence of its former location save for a rebuilt chapel on the site. In the same location one can find petroglyphs dating back from 2200-1000 BCE.