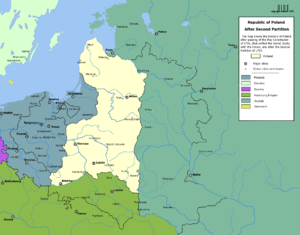 Grodno Sejm was the last Sejm
Sejm
The Sejm is the lower house of the Polish parliament. The Sejm is made up of 460 deputies, or Poseł in Polish . It is elected by universal ballot and is presided over by a speaker called the Marshal of the Sejm ....
(session of parliament) of the Polish-Lithuanian Commonwealth
Polish-Lithuanian Commonwealth
The Polish–Lithuanian Commonwealth was a dualistic state of Poland and Lithuania ruled by a common monarch. It was the largest and one of the most populous countries of 16th- and 17th‑century Europe with some and a multi-ethnic population of 11 million at its peak in the early 17th century...
. The Grodno Sejm, held in fall of 1793 in Grodno, Grand Duchy of Lithuania
Grand Duchy of Lithuania
The Grand Duchy of Lithuania was a European state from the 12th /13th century until 1569 and then as a constituent part of Polish-Lithuanian Commonwealth until 1791 when Constitution of May 3, 1791 abolished it in favor of unitary state. It was founded by the Lithuanians, one of the polytheistic...
(now Hrodna, Belarus) is infamous because its deputies, bribed or coerced
Coercion
Coercion is the practice of forcing another party to behave in an involuntary manner by use of threats or intimidation or some other form of pressure or force. In law, coercion is codified as the duress crime. Such actions are used as leverage, to force the victim to act in the desired way...
by the Russian Empire
Russian Empire
The Russian Empire was a state that existed from 1721 until the Russian Revolution of 1917. It was the successor to the Tsardom of Russia and the predecessor of the Soviet Union...
, passed the act of Second Partition of Poland
Second Partition of Poland
The 1793 Second Partition of the Polish-Lithuanian Commonwealth was the second of three partitions that ended the existence of the Polish-Lithuanian Commonwealth by 1795. The second partition occurred in the aftermath of the War in Defense of the Constitution and the Targowica Confederation of 1792...
. It started on 17 June and ended on 23 November 1793.

The Sejm was called to Grodno by the Russian Empire after the Polish-Russian War of 1792
Polish-Russian War of 1792
The Polish–Russian War of 1792 or War in Defence of the Constitution was fought between the Polish–Lithuanian Commonwealth on one side, and the Targowica Confederation and the Russian Empire on the other....
ended with the victory of Russia and its allies, Targowica Confederation
Targowica Confederation
The Targowica Confederation was a confederation established by Polish and Lithuanian magnates on 27 April 1792, in Saint Petersburg, with the backing of the Russian Empress Catherine II. The confederation opposed the Polish Constitution of May 3, 1791, which had been adopted by the Great Sejm,...
to confirm the Russian demands. Grodno was chosen for the Commonwealth's capital, as Warsaw
Warsaw
Warsaw is the capital and largest city of Poland. It is located on the Vistula River, roughly from the Baltic Sea and from the Carpathian Mountains. Its population in 2010 was estimated at 1,716,855 residents with a greater metropolitan area of 2,631,902 residents, making Warsaw the 10th most...
was deemed too unsafe for Russians (and indeed it would prove so during the Warsaw Uprising
Warsaw Uprising (1794)
The Warsaw Uprising of 1794 was an armed Polish insurrection by the city's populace early in the Kościuszko Uprising. Supported by the Polish Army, it aimed to throw off Russian control of the Polish capital city...
next year). Many of the deputies were Russian supporters (like marshal of the Sejm, Stanisław Kostka Bieliński), with Russian representatives bribing some deputies and Russian armies forcing the election of their favoured candidate at local sejmik
Sejmik
A sejmik was a regional assembly in the Polish–Lithuanian Commonwealth, and earlier in the Kingdom of Poland. Sejmiks existed until the end of the Commonwealth in 1795 following the partitions of the Commonwealth...
s. The Russians needed to use their army, as well as devote funds towards bribery, in order to bypass the opposition of Polish-Lithuanian deputies, as initially, the sejmiks refused to elect enough deputies to satisfy the requirements of a national Sejm.

Eventually, the Sejm was called on the 17 June. The Sejm was held in New Castle in Grodno in presence of Russian garrison stationed in and around the New Castle and commanded by Russian ambassador to Poland
Ambassadors and envoys from Russia to Poland (1763–1794)
Ambassadors and envoys from Russia to Poland-Lithuania in the years 1763-1794 were among the most important characters in the politics of Poland. Their powers went far beyond the those of most diplomats and can be compared to those of viceroys in the colonies of Spanish Empire, or Roman Republic's...
, Jacob Sievers
Jacob Sievers
Count Jacob Sievers was a Russian statesman and a reformer of the empire....
, to ensure the obedience of all deputies; dissidents were threaten with beatings, arrests, sequestration
Sequestration (law)
Sequestration is the act of removing, separating, or seizing anything from the possession of its owner under process of law for the benefit of creditors or the state.-Etymology:...
or exile
Exile
Exile means to be away from one's home , while either being explicitly refused permission to return and/or being threatened with imprisonment or death upon return...
. Majority of the Senators
Senate of Poland
The Senate is the upper house of the Polish parliament, the lower house being the 'Sejm'. The history of the Polish Senate is rich in tradition and stretches back over 500 years, it was one of the first constituent bodies of a bicameral parliament in Europe and existed without hiatus until the...
chose not to attend the proceedings. Many deputies were not allowed to speak, and the main issue on the agenda was the project of 'Eternal Alliance of Poland and Russia', sent to the Sejm by Russian Tsar
Tsar
Tsar is a title used to designate certain European Slavic monarchs or supreme rulers. As a system of government in the Tsardom of Russia and Russian Empire, it is known as Tsarist autocracy, or Tsarism...
ina Catherine the Great, and presented to the Sejm as the 'request of Polish people' by the Polish supporters of Russia. Nonetheless out of 140 deputies present about 25 vocally protested against the proposal, especially against the Prussian territorial demands. On 2 July the Russian troops surrounded the town, and several deputies (Szymon Szydłowski, Dionizy Mikoreski, Antoni Karski and Szymon Skarżyński) were arrested. With further threats and actions by Russians, on 14 October 1793 the alliance was passed by "acclamation
Acclamation
An acclamation, in its most common sense, is a form of election that does not use a ballot. "Acclamation" or "acclamatio" can also signify a kind of ritual greeting and expression of approval in certain social contexts in ancient Rome.-Voting:...
". In fact, after a long debate, around 4 a.m., with Russian forces present and preventing anybody from leaving the room, the marshal of the Sejm asked three times if there is agreement to pass the act. When not a single deputy spoke, Józef Ankwicz
Józef Ankwicz
Józef Ankwicz , of Awdaniec coat of arms, also known as Józef z Posławic and Józef Awdaniec, was a politician and noble in the Polish-Lithuanian Commonwealth. He held the office of castellan of Nowy Sącz from 1782. Deputy to the Great Sejm, and most infamously, the Grodno Sejm...
, another known supporter of foreign powers, declared that it was as unanonimous vote of support ("He who is silent means agreement").

It was not the first time Russian Empire used such strategy: the fate of the Grodno Sejm resembled that of the Sejm Niemy of 1717 - where the only person allowed to speak was the marshal of the Sejm or the Repnin Sejm
Repnin Sejm
The Repnin Sejm was a Sejm of the Polish–Lithuanian Commonwealth that took place between 1767 and 1768 in Warsaw. This session followed the Sejms of 1764 to 1766, where the newly elected King of Poland, Stanisław August Poniatowski, attempted with some successes to push through reforms to...
of 1767-1768, where opponents of Russian intervention were arrested and exiled to Russia.

The Sejm has passed the following acts:

The Russian Empire guaranteed this new constitution, and sanctions for its violation were stated.