The Hellenic Gendarmerie was the national gendarmerie
Gendarmerie
A gendarmerie or gendarmery is a military force charged with police duties among civilian populations. Members of such a force are typically called "gendarmes". The Shorter Oxford English Dictionary describes a gendarme as "a soldier who is employed on police duties" and a "gendarmery, -erie" as...
and military police
Military police
Military police are police organisations connected with, or part of, the military of a state. The word can have different meanings in different countries, and may refer to:...
force of Greece
Greece
Greece , officially the Hellenic Republic , and historically Hellas or the Republic of Greece in English, is a country in southeastern Europe....
. 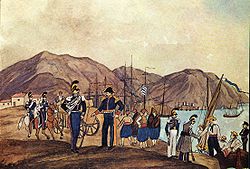 The Greek Gendarmerie was established after the enthronement of King Otto
Otto of Greece
Otto, Prince of Bavaria, then Othon, King of Greece was made the first modern King of Greece in 1832 under the Convention of London, whereby Greece became a new independent kingdom under the protection of the Great Powers .The second son of the philhellene King Ludwig I of Bavaria, Otto ascended...
in 1833 as the Royal Gendarmerie and modeled after the French Gendarmerie. It was at that time formally part of the army
Hellenic Army
The Hellenic Army , formed in 1828, is the land force of Greece.The motto of the Hellenic Army is , "Freedom Stems from Valor", from Thucydides's History of the Peloponnesian War...
and under the authority of the Army Ministry. Several foreign advisers (particularly from Bavaria
Bavaria
Bavaria, formally the Free State of Bavaria is a state of Germany, located in the southeast of Germany. With an area of , it is the largest state by area, forming almost 20% of the total land area of Germany...
, who emphasized elements of centralization and authoritarianism), were also brought in to provide training and tactical advice to the newly formed force. The main task of the Gendarmerie under the army as a whole during this period was firstly to combat the extensive banditry which was endemic in the countryside throughout the 19th century and included kidnappings for ransom, the suppression of local revolts, and the establishment of a strong executive government.

The army's links to the Gendarmerie and the nature of the structure of the force and its hierarchy (that of being similar to the army) was maintained throughout the 19th century for a number of reasons. Largely the socio-political unrest that characterized the period including disproportionate poverty, governmental oppression, sporadic rebellions and political instability. As a result of this, as well as the input of the armed forces, the Gendarmerie remained a largely conservative body throughout the period, there was also a certain amount of politicization during training as the Gendarmerie were trained in military camps.

In 1906 the Gendarmerie underwent its first major restructuring at an administrative level. It acquired its own educational and training facilities independent of those of the army (though still remaining a nominal part of the armed forces). Despite this the Gendarmerie still maintained a largely military based structure, based on its involvement in the Macedonian Struggle
Greek Struggle for Macedonia
The Macedonian Struggle was a series of social, political, cultural and military conflicts between Greeks and Bulgarians in the region of Ottoman Macedonia between 1904 and 1908...
, and the Balkan
Balkan Wars
The Balkan Wars were two conflicts that took place in the Balkans in south-eastern Europe in 1912 and 1913.By the early 20th century, Montenegro, Bulgaria, Greece and Serbia, the countries of the Balkan League, had achieved their independence from the Ottoman Empire, but large parts of their ethnic...
and First World Wars
World War I
World War I , which was predominantly called the World War or the Great War from its occurrence until 1939, and the First World War or World War I thereafter, was a major war centred in Europe that began on 28 July 1914 and lasted until 11 November 1918...
. As a result it tended to neglect civilian matters, something addressed with the establishment of a civilian city police force
Cities Police
The Cities Police was a Greek police force extant from 1921 to 1984, responsible for policing urban areas. It complemented the Greek Gendarmerie, which was responsible for rural and suburban areas.- History :...
for Attica
Attica
Attica is a historical region of Greece, containing Athens, the current capital of Greece. The historical region is centered on the Attic peninsula, which projects into the Aegean Sea...
in 1920, which would eventually be expanded to urban centers in the entire country.

Modernization of the country's police forces was stunted by the successive periods of political instability, which culminated in the regime
4th of August Regime
The 4th of August Regime , commonly also known as the Metaxas Regime , was an authoritarian regime under the leadership of General Ioannis Metaxas that ruled Greece from 1936 to 1941...
of Ioannis Metaxas
Ioannis Metaxas
Ioannis Metaxas was a Greek general, politician, and dictator, serving as Prime Minister of Greece from 1936 until his death in 1941...
and the Second World War. After the war however, British
United Kingdom
The United Kingdom of Great Britain and Northern IrelandIn the United Kingdom and Dependencies, other languages have been officially recognised as legitimate autochthonous languages under the European Charter for Regional or Minority Languages...
experts were brought in to help reform the police along the lines of the British Police. As a result, after 1946 the police forces ceased to be a formal part of the Defence Ministry
Minister for National Defence (Greece)
The Minister for National Defence of Greece is a government minister responsible for the running of the Ministry of National Defence. The current minister is Dimitris Avramopoulos.-Recent Ministers for National Defence:-External links:*...
, although they retained several military features and were organized along military lines.

In the aftermath of the Greek Civil War
Greek Civil War
The Greek Civil War was fought from 1946 to 1949 between the Greek governmental army, backed by the United Kingdom and United States, and the Democratic Army of Greece , the military branch of the Greek Communist Party , backed by Bulgaria, Yugoslavia and Albania...
, the Gendarmerie and the Cities Police became bastions of the conservative and vehemently anti-Communist establishment, a role they would retain throughout the regime of the colonels from 1967 to 1974. After the fall of the Colonels, emphasis was placed on civilian policing. Despite strong opposition from the Gendarmerie, in 1984 both it and the city police were merged into a single unified Greek Police Force
Greek Police
The Hellenic Police is the national police force of Greece. It is a very large agency, its responsibilities ranging from road traffic control to counter-terrorism....
(IAW Law 1481/1-10-1984, Government Gazette 152 A) which however maintained elements of a military structure and hierarchy.