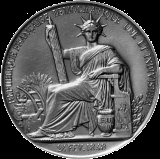 The Great Seal of France is the official seal
Seal (device)
A seal can be a figure impressed in wax, clay, or some other medium, or embossed on paper, with the purpose of authenticating a document ; but the term can also mean the device for making such impressions, being essentially a mould with the mirror image of the design carved in sunken- relief or...
of the French Republic.

The Great Seal features Liberty
Liberty
Liberty is a moral and political principle, or Right, that identifies the condition in which human beings are able to govern themselves, to behave according to their own free will, and take responsibility for their actions...
personnified as a seated Juno
Juno (mythology)
Juno is an ancient Roman goddess, the protector and special counselor of the state. She is a daughter of Saturn and sister of the chief god Jupiter and the mother of Mars and Vulcan. Juno also looked after the women of Rome. Her Greek equivalent is Hera...
wearing a crown with seven arches. She holds a fasces
Fasces
Fasces are a bundle of wooden sticks with an axe blade emerging from the center, which is an image that traditionally symbolizes summary power and jurisdiction, and/or "strength through unity"...
and is supported by a ship's tiller
Tiller
A tiller or till is a lever attached to a rudder post or rudder stock of a boat that provides leverage for the helmsman to turn the rudder...
with a cock
Rooster
A rooster, also known as a cockerel, cock or chanticleer, is a male chicken with the female being called a hen. Immature male chickens of less than a year's age are called cockerels...
carved or printed on it. At her feet is a vase with the letters "SU" ("Suffrage Universel", "Universal suffrage"). At her right, in the background, are symbols of the arts (painter's tools), architecture (Ionic order), education (burning lamp), agriculture (a sheaf of wheat) and industry (a cog wheel). The scene is surrounded by the legend "RÉPUBLIQUE FRANÇAISE, DÉMOCRATIQUE, UNE ET INDIVISIBLE" ("French Republic, democratic, one and indivisible") and "24 FEV.1848" (24 February 1848) at the bottom.

The reverse bears the words "AU NOM DU PEUPLE FRANÇAIS" ("in the name of the French people") surrounded by a crown of oak (symbol of perenity) and laurel (symbol of glory) leaves tied together with weed and grapes (agriculture and wealth), with the circular national motto "LIBERTÉ, ÉGALITÉ, FRATERNITÉ
Liberté, égalité, fraternité
Liberté, égalité, fraternité, French for "Liberty, equality, fraternity ", is the national motto of France, and is a typical example of a tripartite motto. Although it finds its origins in the French Revolution, it was then only one motto among others and was not institutionalized until the Third...
".

The first seals were created by the Merovingian kings to authenticate their orders. Merely rings originally, later worn on a necklace, the royal seals grew bigger and bigger under the House of Capet
House of Capet
The House of Capet, or The Direct Capetian Dynasty, , also called The House of France , or simply the Capets, which ruled the Kingdom of France from 987 to 1328, was the most senior line of the Capetian dynasty – itself a derivative dynasty from the Robertians. As rulers of France, the dynasty...
to reach around 12 centimetres. These are the modern dimensions of the seal.

All the seals under the Ancien Régime featured the king sitting on this throne and giving justice, yet every king had his own personal seal, a unique item which passed with him. All edicts, orders, decrees and declarations were then sealed.

After the abolition of Monarchy and installation of the Republic
National Convention
During the French Revolution, the National Convention or Convention, in France, comprised the constitutional and legislative assembly which sat from 20 September 1792 to 26 October 1795 . It held executive power in France during the first years of the French First Republic...
on the 21 September 1792, the end of monarchy was symbolised by the seals of the State being broken and sent to the Monnaie (the place where seals and coins are made and stored). In September 1792, Danton
Georges Danton
Georges Jacques Danton was leading figure in the early stages of the French Revolution and the first President of the Committee of Public Safety. Danton's role in the onset of the Revolution has been disputed; many historians describe him as "the chief force in theoverthrow of the monarchy and the...
(then minister of Justice) had the first seal of the Republic made: a personification of Liberty standing, supported by a fasces
Fasces
Fasces are a bundle of wooden sticks with an axe blade emerging from the center, which is an image that traditionally symbolizes summary power and jurisdiction, and/or "strength through unity"...
and holding a spear with a phrygian cap
Phrygian cap
The Phrygian cap is a soft conical cap with the top pulled forward, associated in antiquity with the inhabitants of Phrygia, a region of central Anatolia. In the western provinces of the Roman Empire it came to signify freedom and the pursuit of liberty, perhaps through a confusion with the pileus,...
.

Napoléon, Louis XVIII
Louis XVIII of France
Louis XVIII , known as "the Unavoidable", was King of France and of Navarre from 1814 to 1824, omitting the Hundred Days in 1815...
and Charles X
Charles X of France
Charles X was known for most of his life as the Comte d'Artois before he reigned as King of France and of Navarre from 16 September 1824 until 2 August 1830. A younger brother to Kings Louis XVI and Louis XVIII, he supported the latter in exile and eventually succeeded him...
all took back the seal of majesty, Louis-Philippe
Louis-Philippe of France
Louis Philippe I was King of the French from 1830 to 1848 in what was known as the July Monarchy. His father was a duke who supported the French Revolution but was nevertheless guillotined. Louis Philippe fled France as a young man and spent 21 years in exile, including considerable time in the...
showing only his bust.

The present seal dates back to the Second Republic
French Second Republic
The French Second Republic was the republican government of France between the 1848 Revolution and the coup by Louis-Napoléon Bonaparte which initiated the Second Empire. It officially adopted the motto Liberté, Égalité, Fraternité...
, which briefly used the seals of the First Republic before having a new design made by the artist Jacques-Jean Barre
Jacques-Jean Barre
Jean-Jacques Barre was the general engraver at the Monnaie de Paris between 1842 and 1855. In this position, he engraved and designed French medals, the Great Seal of France, bank notes and postage stamps....
on the 8 September 1848.

Under the Second Republic, usage of the Great Seal of France tended to be reduced to sealing laws, decrees of the National Assembly and diplomatic treaties. The function of Keeper of the seals
Keeper of the seals
The title Keeper of the Seals or equivalent is used in several contexts, denoting the person entitled to keep and authorize use of the Great Seal of a given country. The title may or may not be linked to a particular cabinet or ministerial office.- Canada :...
was officially linked to that of Minister of Justice at that time (the French Minister of Justice is popularly referred to "Le Garde des Sceaux").

After the Second Empire
Second French Empire
The Second French Empire or French Empire was the Imperial Bonapartist regime of Napoleon III from 1852 to 1870, between the Second Republic and the Third Republic, in France.-Rule of Napoleon III:...
, the practice of applying seals to laws was gradually abandoned and restricted to constitutional acts and diplomatic treaties (for instance, the Treaty of Versailles
Treaty of Versailles
The Treaty of Versailles was one of the peace treaties at the end of World War I. It ended the state of war between Germany and the Allied Powers. It was signed on 28 June 1919, exactly five years after the assassination of Archduke Franz Ferdinand. The other Central Powers on the German side of...
was sealed in this way).

Originally, sealers used a plastic
Plasticity (physics)
In physics and materials science, plasticity describes the deformation of a material undergoing non-reversible changes of shape in response to applied forces. For example, a solid piece of metal being bent or pounded into a new shape displays plasticity as permanent changes occur within the...
sealing wax
Sealing wax
Sealing wax is a wax material of a seal which, after melting, quickly hardens forming a bond that is difficult to separate without noticeable tampering. Wax is used to verify something such as a document is unopened, to verify the sender's identity, for example with a signet ring, and as decoration...
which they shaped by hand into generally circular pieces which were definitely shaped by a press.

Nowadays, a liquid wax is fed directly into the inferior part of a shape made of a stamp and a mobile metallic ring; the shape is closed and the wax cools down until it becomes pasty before it is applied.

Usage of the Great Seal having become obsolete between 1920 and 1946, the recipe for the wax was lost. In 1946, trials had to be made by the Sigillographic
Sigillography
Sigillography is one of the auxiliary sciences of history. It refers to the study of seals attached to documents as a source of historical information. It concentrates on the legal and social meaning of seals, as well as the evolution of their design...
service of the National Archives.

The Ancien Régime used a green wax for important documents, and a yellow for less important ones.

The Restoration, the July Monarchy
July Monarchy
The July Monarchy , officially the Kingdom of France , was a period of liberal constitutional monarchy in France under King Louis-Philippe starting with the July Revolution of 1830 and ending with the Revolution of 1848...
and the Third Republic
French Third Republic
The French Third Republic was the republican government of France from 1870, when the Second French Empire collapsed due to the French defeat in the Franco-Prussian War, to 1940, when France was overrun by Nazi Germany during World War II, resulting in the German and Italian occupations of France...
kept the yellow wax, while the First Republic
French First Republic
The French First Republic was founded on 22 September 1792, by the newly established National Convention. The First Republic lasted until the declaration of the First French Empire in 1804 under Napoleon I...
, the Consulate
French Consulate
The Consulate was the government of France between the fall of the Directory in the coup of 18 Brumaire in 1799 until the start of the Napoleonic Empire in 1804...
and the Empire
First French Empire
The First French Empire , also known as the Greater French Empire or Napoleonic Empire, was the empire of Napoleon I of France...
used a red wax.

The Third Republic
French Third Republic
The French Third Republic was the republican government of France from 1870, when the Second French Empire collapsed due to the French defeat in the Franco-Prussian War, to 1940, when France was overrun by Nazi Germany during World War II, resulting in the German and Italian occupations of France...
used the same red and green ribbon as the Monarchy. Since 1946 (the Fourth and Fifth Republics), a tricolour ribbon is in use.
The source of this article is wikipedia, the free encyclopedia.  The text of this article is licensed under the GFDL.