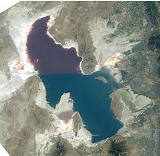 Overview
The Great Salt Lake, located in the northern part of the U.S. state
U.S. state
A U.S. state is any one of the 50 federated states of the United States of America that share sovereignty with the federal government. Because of this shared sovereignty, an American is a citizen both of the federal entity and of his or her state of domicile. Four states use the official title of...
of Utah
Utah
Utah is a state in the Western United States. It was the 45th state to join the Union, on January 4, 1896. Approximately 80% of Utah's 2,763,885 people live along the Wasatch Front, centering on Salt Lake City. This leaves vast expanses of the state nearly uninhabited, making the population the...
, is the largest salt water lake in the western hemisphere, the fourth-largest terminal lake in the world. In an average year the lake covers an area of around 1700 square miles (4,403 km²), but the lake's size fluctuates substantially due to its shallowness. For instance, in 1963 it reached its lowest recorded level at 950 square miles (2,460 km²), but in 1988 the surface area was at the historic high of 3300 square miles (8,547 km²).

The lake is the largest remnant of Lake Bonneville
Lake Bonneville
Lake Bonneville was a prehistoric pluvial lake that covered much of North America's Great Basin region. Most of the territory it covered was in present-day Utah, though parts of the lake extended into present-day Idaho and Nevada. Formed about 32,000 years ago, it existed until about 14,500 years...
, a pluvial lake
Pluvial lake
A pluvial lake is a landlocked basin which fills with rainwater during times of glaciation, when precipitation is higher. Pluvial lakes that have since evaporated and dried out may also be referred to as paleolakes.-Geology:...
which covered much of western Utah in prehistoric times.

I'd like to be at Rozel Point in the spring when pelicans are flying overhead to Gunnison Island. I am planning a trip out there on March 31 and wond...
More
x