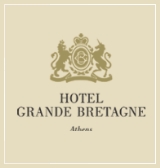 Encyclopedia
The Grande Bretagne is a luxury city hotel in Greece
Greece
Greece , officially the Hellenic Republic , and historically Hellas or the Republic of Greece in English, is a country in southeastern Europe....
, one of the most luxurious in southeastern Europe
Europe
Europe is, by convention, one of the world's seven continents. Comprising the westernmost peninsula of Eurasia, Europe is generally 'divided' from Asia to its east by the watershed divides of the Ural and Caucasus Mountains, the Ural River, the Caspian and Black Seas, and the waterways connecting...
. It is located in central Athens
Athens
Athens , is the capital and largest city of Greece. Athens dominates the Attica region and is one of the world's oldest cities, as its recorded history spans around 3,400 years. Classical Athens was a powerful city-state...
immediately adjacent to Syntagma Square
Syntagma Square
Syntagma Square , is located in central Athens, Greece. The Square is named after the Constitution that King Otto was forced to grant the people after a popular and military uprising, on September 3, 1843....
, on the corner of Vasileos Georgiou A' and Panepistimiou Streets, and is now part of "The Luxury Collection" hotel chain, managed by the American company Starwood Hotels & Resorts.

The structure was built in 1842 as a house for Antonis Dimitriou, a wealthy Greek
Greece
Greece , officially the Hellenic Republic , and historically Hellas or the Republic of Greece in English, is a country in southeastern Europe....
from the island of Limnos, only 12 years after Greece's independence
Greek War of Independence
The Greek War of Independence, also known as the Greek Revolution was a successful war of independence waged by the Greek revolutionaries between...
from Ottoman Rule
Ottoman Empire
The Ottoman EmpireIt was usually referred to as the "Ottoman Empire", the "Turkish Empire", the "Ottoman Caliphate" or more commonly "Turkey" by its contemporaries...
. It was then bought in 1874 by Efstathios Lampas, who restored the mansion with an 800,000 drachma loan and named it the Grande Bretagne; by 1888 the hotel had electricity installed. Its location is adjacent to the parliament building and one kilometre from the Acropolis.

During the early stages of the Greek Civil War
Greek Civil War
The Greek Civil War was fought from 1946 to 1949 between the Greek governmental army, backed by the United Kingdom and United States, and the Democratic Army of Greece , the military branch of the Greek Communist Party , backed by Bulgaria, Yugoslavia and Albania...
, the hotel housed the British
United Kingdom
The United Kingdom of Great Britain and Northern IrelandIn the United Kingdom and Dependencies, other languages have been officially recognised as legitimate autochthonous languages under the European Charter for Regional or Minority Languages...
military administration, under General Ronald Scobie
Ronald Scobie
Lieutenant-General Sir Ronald MacKenzie Scobie KBE, CB, MC was a British Army officer who commanded III Corps.-Military career:...
, in Athens.

In 2003, the Grande Bretagne underwent a complete renovation to restore it to its former glory, and approximately 82 million Euros were invested to completely modernize the building. There are 321 comprehensively renovated rooms, including a 400 square metres (4,305 sqf.) Royal Suite on the fifth floor; the price for a night in the Royal Suite can reach € 12,000.