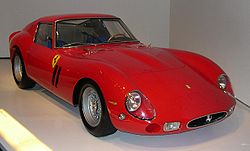 A grand tourer (GT) is a high-performance luxury automobile
Automobile
An automobile, autocar, motor car or car is a wheeled motor vehicle used for transporting passengers, which also carries its own engine or motor...
designed for long-distance driving. The most common format is a two-door coupé
Coupé
A coupé or coupe is a closed car body style , the precise definition of which varies from manufacturer to manufacturer, and over time...
with either a two-seat or a 2+2
2 plus 2
The term 2+2 is a phrase used to describe the configuration of a car with seating for two passengers in the front, plus two smaller seats for occasional passengers in the rear.-Description:...
arrangement.

The term derives from the Italian
Italian language
Italian is a Romance language spoken mainly in Europe: Italy, Switzerland, San Marino, Vatican City, by minorities in Malta, Monaco, Croatia, Slovenia, France, Libya, Eritrea, and Somalia, and by immigrant communities in the Americas and Australia...
phrase gran turismo, homage to the tradition of the grand tour
Grand Tour
The Grand Tour was the traditional trip of Europe undertaken by mainly upper-class European young men of means. The custom flourished from about 1660 until the advent of large-scale rail transit in the 1840s, and was associated with a standard itinerary. It served as an educational rite of passage...
, used to represent automobiles regarded as grand tourers, able to make long-distance, high-speed journeys in both comfort and style. The English translation is grand touring.

Grand tourers differ from standard two-seat sports car
Sports car
A sports car is a small, usually two seat, two door automobile designed for high speed driving and maneuverability....
s in typically being engineered as larger and heavier, emphasizing comfort over straight-out performance or spartan accommodations. Historically, most GTs have been front-engined with rear-wheel drive, which creates more space for the cabin than mid-mounted engine layouts. Softer suspensions
Suspension (vehicle)
Suspension is the term given to the system of springs, shock absorbers and linkages that connects a vehicle to its wheels. Suspension systems serve a dual purpose — contributing to the car's roadholding/handling and braking for good active safety and driving pleasure, and keeping vehicle occupants...
, greater storage, and more luxurious appointments add to their driving appeal. Some very high-performance grand tourers, such as the Aston Martin DB9
Aston Martin DB9
-DB9 Volante:The Aston Martin DB9 Volante is the convertible version of the DB9 coupe. It is built by hand in limited numbers and has enhanced styling. It is powered by the same 6.0 litre, DOHC 48 valve V12 as the DB9 and is completed with 470 bhp and a top speed of 186 mph...
, Ferrari 599 GTB Fiorano
Ferrari 599 GTB Fiorano
The 599 GTB Fiorano is an Italian gran turismo produced by Ferrari. It is the brand's two-seat flagship, replacing the 575 M Maranello in 2006 as a 2007 model....
, and the Mercedes-Benz SLR McLaren
Mercedes-Benz SLR McLaren
The Mercedes-Benz SLR McLaren is an Anglo-German grand tourer car jointly developed by Mercedes-Benz and McLaren Automotive, built in Portsmouth and the McLaren Technology Centre in Woking, Surrey, England and sold from 2003 to 2009...
make various compromises in the opposite direction while rivalling sports cars in speed, acceleration, and cornering ability, earning them the special designation supercar
Supercar
Supercar is a term used most often to describe an expensive high end car. It has been defined specifically as "a very expensive, fast or powerful car"...
s.

The GT abbreviation, so popular across the automotive industry, traces to the Italian tradition of referring to their luxury performance cars as gran turismo. Manufacturers such as Alfa Romeo
Alfa Romeo
Alfa Romeo Automobiles S.p.A. is an Italian manufacturer of cars. Founded as A.L.F.A. on June 24, 1910, in Milan, the company has been involved in car racing since 1911, and has a reputation for building expensive sports cars...
, Ferrari
Ferrari
Ferrari S.p.A. is an Italian sports car manufacturer based in Maranello, Italy. Founded by Enzo Ferrari in 1929, as Scuderia Ferrari, the company sponsored drivers and manufactured race cars before moving into production of street-legal vehicles as Ferrari S.p.A. in 1947...
and Lancia
Lancia
Lancia Automobiles S.p.A. is an Italian automobile manufacturer founded in 1906 by Vincenzo Lancia and which became part of the Fiat Group in 1969. The company has a long history of producing distinctive cars and also has a strong rally heritage. Some modern Lancias are seen as presenting a more...
led the way starting from the end of 1920s.

Among the many variations of GT are:

Today the term grand tourer, or gran turismo is synonymous with race versions of sports cars (even those which don't fit the definition given above) that take part in sports car racing
Sports car racing
Sports car racing is a form of circuit auto racing with automobiles that have two seats and enclosed wheels. They may be purpose-built or related to road-going sports cars....
, including endurance races like the 24 Hours of Le Mans
24 Hours of Le Mans
The 24 Hours of Le Mans is the world's oldest sports car race in endurance racing, held annually since near the town of Le Mans, France. Commonly known as the Grand Prix of Endurance and Efficiency, race teams have to balance speed against the cars' ability to run for 24 hours without sustaining...
, 12 Hours of Sebring
12 Hours of Sebring
The 12 Hours of Sebring is an annual motorsport endurance race for sports cars held at Sebring International Raceway, a former Army Air Force base in Sebring, Florida...
, Petit Le Mans
Petit Le Mans
The Petit Le Mans is a sports car endurance race held annually at Road Atlanta in Braselton, Georgia, USA. It uses the rules established for the 24 hours of Le Mans by the Automobile Club de l'Ouest , which are slightly modified if necessary, mainly to allow additional cars to compete.The race was...
, Mille Miglia
Mille Miglia
The Mille Miglia was an open-road endurance race which took place in Italy twenty-four times from 1927 to 1957 ....
, Targa Florio
Targa Florio
The Targa Florio was an open road endurance automobile race held in the mountains of Sicily near Palermo. Founded in 1906, it was the oldest sports car racing event, part of the World Sportscar Championship between 1955 and 1973...
, and Carrera Panamericana
Carrera Panamericana
The Carrera Panamericana was a border-to-border sports car racing event on open roads in Mexico similar to the Mille Miglia and Targa Florio in Italy. Running for five consecutive years from 1950 to 1954, it was widely held by contemporaries to be the most dangerous race of any type in the world...
. Examples of race grand tourers include:

In certain professional motorsport classifications, such as the Grand Touring categories promoted by the FIA
Fédération Internationale de l'Automobile
The Fédération Internationale de l'Automobile is a non-profit association established as the Association Internationale des Automobile Clubs Reconnus on 20 June 1904 to represent the interests of motoring organisations and motor car users...
, the GT car is defined as "an open or closed automobile which has no more than one door on each side and a minimum of two seats situated one on each side of the longitudinal centre line of the car; these two seats must be crossed by the same transversal plane. This car must be able to be used perfectly legally on the open road, and adapted for racing on circuits or closed courses." GT cars are divided, from most powerful to least powerful, into GT1 (formerly GTS and GT) and GT2 (formerly GT and N-GT) in most championships, although the ACO has canceled further GT1 involvement not only in the 24 Hours of Le Mans
24 Hours of Le Mans
The 24 Hours of Le Mans is the world's oldest sports car race in endurance racing, held annually since near the town of Le Mans, France. Commonly known as the Grand Prix of Endurance and Efficiency, race teams have to balance speed against the cars' ability to run for 24 hours without sustaining...
but in every other Le Mans Series (LMS, ALMS, ILMC, JLMC) sanctioned by the ACO. This only left room for GT1 cars to race in the FIA GT1 World Championship
FIA GT1 World Championship
The FIA GT1 World Championship is a world championship sports car racing series developed by the SRO Group and regulated by the Fédération Internationale de l'Automobile . It features multiple grand tourer race cars based on production road cars and conforming with the GT1 regulations competing in...
, while in turn GT2 cars only competed in ACO sanctioned event due to the absence of the FIA GT2 European Championship. GT3 and GT4 class cars also have their own championships, as well as being eligible for several National GT championships.

A true grand tourer is a luxury high-performance vehicle intended for long-distance high-speed travel in both comfort and style; just because a manufacturer appended some form of GT initials to its model designation as a marketing gambit does not make such a car a grand tourer. Some examples include: