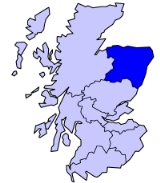 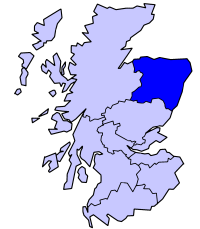 Grampian was a local government
Local government of Scotland
Local government in Scotland is organised through 32 unitary authorities designated as Councils which consist of councillors elected every four years by registered voters in each of the council areas....
region
Regions and districts of Scotland
The local government areas of Scotland were redefined by the Local Government Act 1973 and redefined again by the Local Government etc Act 1994....
of Scotland
Scotland
Scotland is a country that is part of the United Kingdom. Occupying the northern third of the island of Great Britain, it shares a border with England to the south and is bounded by the North Sea to the east, the Atlantic Ocean to the north and west, and the North Channel and Irish Sea to the...
from 1975 to 1996. It is now divided into the unitary council areas of:

The region took its name from the Grampian Mountains.

Grampian continues to have a joint police service
Grampian Police
Grampian Police is the territorial police force of the northeast region of Scotland, covering the council areas of Aberdeenshire, the City of Aberdeen, and Moray . The Force area also covers some of the North Sea, giving Grampian Police the responsibility of policing the oil and gas platforms of...
, fire service, and electoral, valuation, and Health boards
NHS Grampian
NHS Grampian is one of the fourteen regions of NHS Scotland. It was formed on 1 April 2004 by the amalgamation of Grampian University Hospitals NHS Trust, Grampian Primary Care NHS Trust and Grampian Health Board. The health board's headquarters are located at Summerfield House in the Mastrick...
.