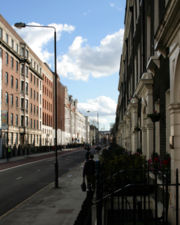 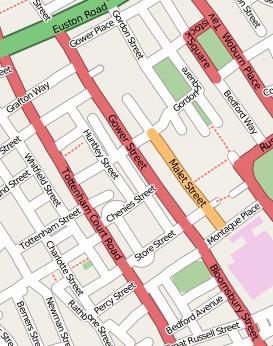 Gower Street is a street in Bloomsbury
Bloomsbury
-Places:* Bloomsbury is an area in central London.* Bloomsbury , related local government unit* Bloomsbury, New Jersey, New Jersey, USA* Bloomsbury , listed on the NRHP in Maryland...
, Central London
Central London
Central London is the innermost part of London, England. There is no official or commonly accepted definition of its area, but its characteristics are understood to include a high density built environment, high land values, an elevated daytime population and a concentration of regionally,...
, England
England
England is a country that is part of the United Kingdom. It shares land borders with Scotland to the north and Wales to the west; the Irish Sea is to the north west, the Celtic Sea to the south west, with the North Sea to the east and the English Channel to the south separating it from continental...
, running between Euston Road
Euston Road
Euston Road is an important thoroughfare in central London, England, and forms part of the A501. It is part of the New Road from Paddington to Islington, and was opened as part of the New Road in 1756...
to the north and Montague Place to the south.

On 29 December 1838, Charles Darwin
Charles Darwin
Charles Robert Darwin FRS was an English naturalist. He established that all species of life have descended over time from common ancestry, and proposed the scientific theory that this branching pattern of evolution resulted from a process that he called natural selection.He published his theory...
took the let of the furnished property at 12 Upper Gower Street (later 110 Gower Street), and wrote to tell his fiancée Emma Wedgwood
Emma Darwin
Emma Darwin was the wife and first cousin of Charles Darwin, the English naturalist, scientist and author of On the Origin of Species...
of his delight at being the "possessor of Macaw Cottage". As their daughter Etty
Etty Darwin
Henrietta Emma "Etty" Darwin, was a daughter of Charles Darwin and his wife Emma Wedgwood.Etty was born in Down House, Downe in 1843. She was Darwin's third daughter and the eldest daughter to reach adulthood after the eldest Annie died aged 10, and second daughter Mary died before becoming a...
later recalled, "He used to laugh over the ugliness of their house in Gower St, and the furniture in the drawing-room, which he said combined all the colours of the macaw in hideous discord", and Darwin had christened the house "Macaw Cottage" in "allusion to the gaudy colours of the walls and furniture." He moved in on 31 December, and with Emma moved in on the day of their marriage, 29 January 1839. The development of Darwin's theory
Development of Darwin's theory
Following the inception of Charles Darwin's theory of natural selection in 1838, the development of Darwin's theory to explain the "mystery of mysteries" of how new species originated was his "prime hobby" in the background to his main occupation of publishing the scientific results of the Beagle...
of natural selection
Natural selection
Natural selection is the nonrandom process by which biologic traits become either more or less common in a population as a function of differential reproduction of their bearers. It is a key mechanism of evolution....
made progress in this house, and their children William Erasmus Darwin
William Erasmus Darwin
William Erasmus Darwin was the first-born son of Charles and Emma Darwin, and the subject of psychological studies by his father. He was educated at Rugby School and Christ's College Cambridge, and later became a banker at Grant and Maddison's Union Banking Company in Southampton. In 1877 he...
and Anne Darwin
Anne Darwin
Anne Elizabeth "Annie" Darwin was the second child and eldest daughter of Charles and Emma Darwin. According to biographers, she was a delightful child who brought much happiness to her parents. Eminent Darwin scholar E...
were born there. In 1842 the family moved to Down House
Down House
Down House is the former home of the English naturalist Charles Darwin and his family. It was in this house and garden that Darwin worked on his theories of evolution by natural selection which he had conceived in London before moving to Downe....
in the countryside, and the Gower Street house became part of the warehouse system of Messrs Schoolbred. On 13 December 1904 a London County Council
London County Council
London County Council was the principal local government body for the County of London, throughout its 1889–1965 existence, and the first London-wide general municipal authority to be directly elected. It covered the area today known as Inner London and was replaced by the Greater London Council...
blue plaque
Blue plaque
A blue plaque is a permanent sign installed in a public place to commemorate a link between that location and a famous person or event, serving as a historical marker....
was put up, to "Charles Darwin Naturalist". The house suffered from bomb damage in 1941 during the Blitz
The Blitz
The Blitz was the sustained strategic bombing of Britain by Nazi Germany between 7 September 1940 and 10 May 1941, during the Second World War. The city of London was bombed by the Luftwaffe for 76 consecutive nights and many towns and cities across the country followed...
, and was not repaired. In 1961 the site became part of the Biological Sciences building of University College London
University College London
University College London is a public research university located in London, United Kingdom and the oldest and largest constituent college of the federal University of London...
, with a new plaque. The long thin garden which backed on to Gower Mews North (later Malet Place) was incorporated into Foster Court car park in 1978.
The Pre-Raphaelite Brotherhood
Pre-Raphaelite Brotherhood
The Pre-Raphaelite Brotherhood was a group of English painters, poets, and critics, founded in 1848 by William Holman Hunt, John Everett Millais and Dante Gabriel Rossetti...
was founded in the Millais family house on Gower Street in the winter of 1848–49.

The Walloon
Walloons
Walloons are a French-speaking people who live in Belgium, principally in Wallonia. Walloons are a distinctive community within Belgium, important historical and anthropological criteria bind Walloons to the French people. More generally, the term also refers to the inhabitants of the Walloon...
(Belgian) poet Henri Michaux
Henri Michaux
Henri Michaux was a highly idiosyncratic Belgian-born poet, writer, and painter who wrote in French. He later took French citizenship. Michaux is best known for his esoteric books written in a highly accessible style, and his body of work includes poetry, travelogues, and art criticism...
briefly resided in Gower Street in February 1931.

From 1976 until 1995 the headquarters of MI5
MI5
The Security Service, commonly known as MI5 , is the United Kingdom's internal counter-intelligence and security agency and is part of its core intelligence machinery alongside the Secret Intelligence Service focused on foreign threats, Government Communications Headquarters and the Defence...
were an anonymous grey office block at 140 Gower Street, adjacent to the Euston Road. The site has since been redeveloped.

185 North Gower Street (not Gower Street) is the filming location for 221b Baker Street
221B Baker Street
221B Baker Street is the London address of the fictional detective Sherlock Holmes, created by author Sir Arthur Conan Doyle. In the United Kingdom, postal addresses with a number followed by a letter may indicate a separate address within a larger, often residential building...
, Sherlock Holmes
Sherlock Holmes
Sherlock Holmes is a fictional detective created by Scottish author and physician Sir Arthur Conan Doyle. The fantastic London-based "consulting detective", Holmes is famous for his astute logical reasoning, his ability to take almost any disguise, and his use of forensic science skills to solve...
residence in the 2010 BBC
BBC
The British Broadcasting Corporation is a British public service broadcaster. Its headquarters is at Broadcasting House in the City of Westminster, London. It is the largest broadcaster in the world, with about 23,000 staff...
adaptation Sherlock.